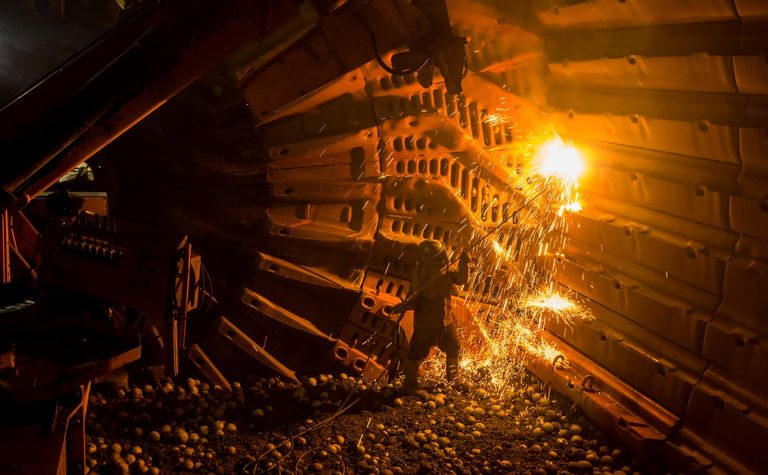 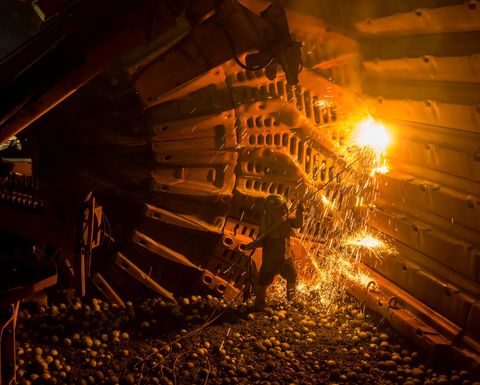 Unlike a typical tradesman, once a mill reline professional has left the industry there is no immediate replacement for them

By the time gold prices broke through the US$2,000/oz level in 1980, the mining boom that had started in the mid-70s, was already well underway. This unprecedented high price for gold meant that many large low-grade ore deposits were now commercially viable mining propositions.

Semi autogenous grinding (SAG) mills, because of their advantages in terms of capital and operating costs, were the natural choice for mines as their primary grinding mill option. Then, in the late 1980s when the price of copper rose quickly from a low of $0.62/lb to a high of $1.62/lb, this substantial increase in price further fuelled the industry demand for larger diameter SAG mills, with mill power quickly doubling from 15,000hp to 30,000hp (11,000-22,000kW).

As SAG mills grew in size and number, so did the size and weight of the linings required. This increase in liner size created a maintenance problem, because the changing out of worn liners was a task that could no longer be performed by hand.

Additionally, there was also a new problem for production staff: because a SAG mill was often now the only primary grinding mill, that meant that when that mill was stopped to change out worn linings, all production for that concentrator stopped.

The larger ore concentrators of the earlier and mid-20th century had consisted of many, sometimes dozens, of smaller mills, in which case taking one or two of them off line to change worn mill linings did not significantly affect production, because the majority of the plant was still producing.

US-based manufacturing firms had been supplying the mining industry with mechanical liner handling machines throughout the 70s, but they were not prepared to handle the industry demand for modern, custom-made, larger and more robust liner handlers which were faster and safer.

In the mid-80’s an Australian firm entered the liner handler manufacturing field and started to fill that equipment demand, and it soon became the industry leader, a position it retains to this day. 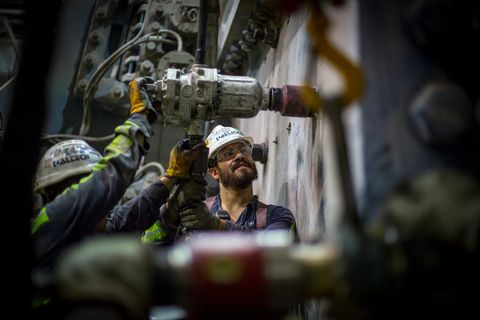 The task in hand

Liner jobs or worn liner refurbishment, commonly referred to as mill relining (a task that was often performed by hand), had been undertaken in smaller mills, or in mills with small components, for over a century. However, the method for efficiently installing and removing the significantly larger new and worn liners in the next generation of SAG mills was something that now needed to be developed, along with reline-specific tooling.

Safety on the job, at this time, was also becoming more and more of an issue. Through poor methodology and lack of reline experience, serious bodily injuries and even a few fatalities did occur. The precise handling of individual liners that weighed in excess of 15,000lbs (7t), inside a confined space, without incident or accident, requires correct procedures and trained reliners.

Concentrators maintained by union personnel usually kept all the maintenance tasks in-house, and mines often wouldn’t consider the potential of outside, more efficient alternatives. It was probably because this in-house maintenance approach was quite workable over a long period of time, especially for concentrators with a large number of smaller mills and plenty of available labour, that this was considered the way forward.
However, when there was only one primary grinding mill- a large SAG mill- the process became too inefficient and costly (in the terms of increased downtime) for the mill to be relined by an in-house team.

Occasionally, if the in-house maintenance team did manage to keep most of the same personnel, and there were several mills on which they could gain reline experience throughout the year, they could achieve an acceptable reline performance and safety standard.

However, for the most part, the team would only get the chance to perform a partial reline on the SAG mill about three or four times a year, and the opportunity to practice and build on their base reline skills was therefore very limited.

While these in-house reline teams did occasionally become competent at relining their own SAG mills, the large number of men required meant that other equally important maintenance tasks that could only occur during the time of the mill shutdown, were not always satisfactorily attended to. This was especially the case in remote and personnel-limited, fly-in fly-out mining operation, such as those in Western and Central Australia.

Starting around the mid-1980s, general contractors that were offering and providing shutdown maintenance assistance to some of the more remote mining operations, began to tackle the task of mill relining directly.

Because these maintenance providers regularly performed mill relines at various different sites, and on different sized SAG, ball and rod mills, they began to build teams of skilled men who knew how to competently reline almost any mill; these teams were the first reline professionals.
Once it became accepted by the industry that reline professionals could change out the liners in any mill faster and more safely than in-house teams, there was an increase in demand for this type of service. 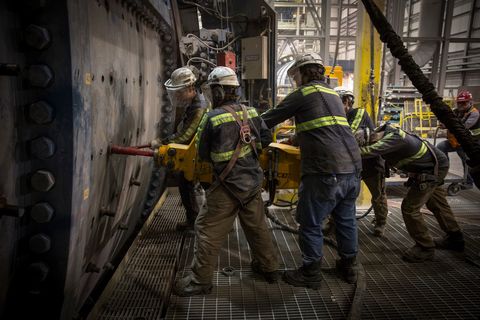 While it is true that the basic reline process is fairly simplistic, it would be a mistake to think that any group of competent persons can safely and efficiently reline a mill. For an analogy, it would be a bit like saying that anyone can change a wheel on a car; if a person was somewhat experienced and had the right tools, this may take five minutes. Others with less experience could take 15 minutes or longer. A NASCAR pit crew can change a wheel in five seconds. Relining professionals are the NASCAR pit crews of mill relining.

The relining of mills is a necessary process and it is very often the critical maintenance path of a concentrator shut down. Generally speaking, and depending on current ore prices, the production of a large SAG mill usually equates to between US$30,000 and US$200,000 per hour. The high-wear liner components of a large SAG mill can take anywhere from 40-120+ hours to replace, depending on worn liner condition, support equipment, tooling, and the depth of experience of the reline crew.

As a rule, and as a minimum, a professional reline crew should outperform the ‘skilled’ nonprofessional or in-house reline crews by 30% or more, with improved safety. That difference in efficiency is the reason why professional mill relining companies exist today. In most cases, the cost of their service is more than compensated for by the value of the increase in mill availability.

Today mills are typically relined by one of the below options, which have been sorted into descending order from the least safe and least efficient, down to the most safe and efficient. While there are exceptions to any generalisation, the below is a good guide.

The cost of cost cutting

In recent years and across the mining industry, there has been pressure applied to all service providers to reduce the costs of their service, yet they are still expected to safely provide exceptional value for money. 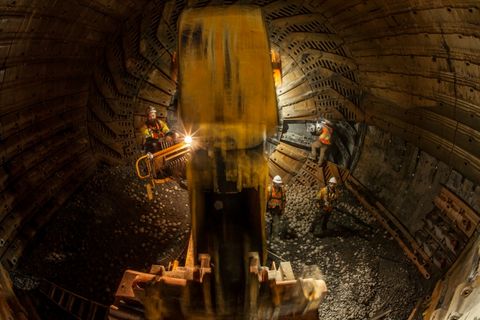 This pressure from mine owners has resulted in different things happening in different reline markets, but in most markets, the rates have been reduced and reline performance has dropped, even though the pressure to perform has been increased.

Unlike typical recognised tradesmen, such as electricians or plumbers, once a mill reline professional (an individual who has relined hundreds of mills over many years) has left the industry, mainly due to reduced income because of cost cutting, there is no immediate replacement for them.

While cost cutting is understandably necessary at times, unfortunately with mill relines it can, and often does, have a negative long-term effect on the quality of the reline service available, both immediately and into the future. This ultimately has a negative effect on mill availability and thus cost of service.

A closer look at value

It would probably be accurate to say that there is nobody who aspires to be a mill reliner for a living; why would anyone want to willingly work in a confined space, with numerous pinch points, often at extreme heat, with poor visibility, constant exposure to dust, silica, lead, uranium, toxic gases and many other dangerous chemicals?

Working on thick mud, or slippery round balls that, when energised, can explode with sufficient velocity to sever fingers or slash arteries; working around heavy suspended loads, often dealing with cracked liners with missing bolts hanging over head, and always working under extreme pressure to get the job done quickly and safely. It takes a rare and somewhat special person to want do this type of work.

Couple that with the fact that mill liners do not wear out on a nicely ordered Monday to Friday schedule. A mill reliner may be away from home for several weeks working 13 hour days, and then be back home with nothing to do, and no income for several weeks. Factoring all this in, it is surprising that there is anyone that is willing to take on mill relining as a profession.

There are more and more mining operations that are now realising the rarity and value of the professional reliner. They are viewing these teams as strategic partners; an essential part of the success of their operation. Aside from the marked increase in safety, the difference in mill availability that comes from using a professional reline crew and a lesser alternative can translate to 1-3% in mill availability.

When ore prices are low and, economically, times are tough, there are a number of plants where that percentage of mill availability increase makes the difference between staying open and closing the doors.

Even where that is not the case, the increase in mill availability is still a considerable number; it is of significant monetary value.

Those mining operations that recognise the value of the professional reline service are thinking ahead. They are demanding value for money from the reline teams, they are definitely demanding improvements in safety and reline efficiency, and they are also demanding input on reline-friendly liner designs, improved tooling, better access, and many other things.

When ore prices turn around, and they will, it will be these operations that will be ahead of the curve. It will be those operations which have the best chance of having the highest mill availability possible for their plant through safe and efficient relines performed by the professionals. And therein lays the real value of the professional mill reliner.

Delivery includes a VF Series grizzly feeder and a Nordberg jaw crusher, among other equipment