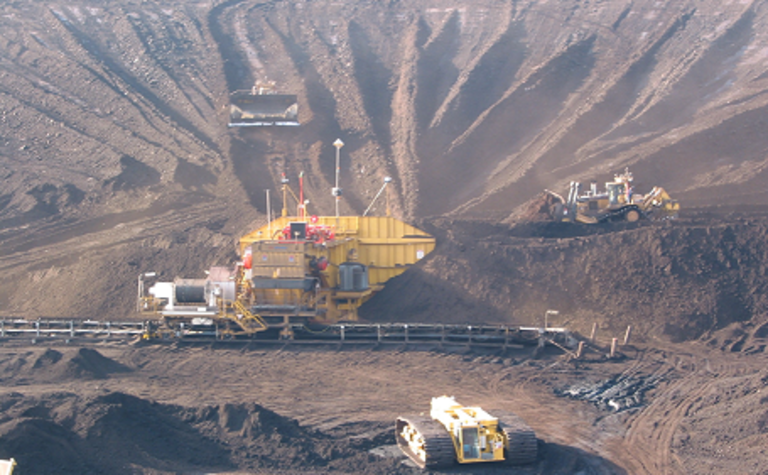 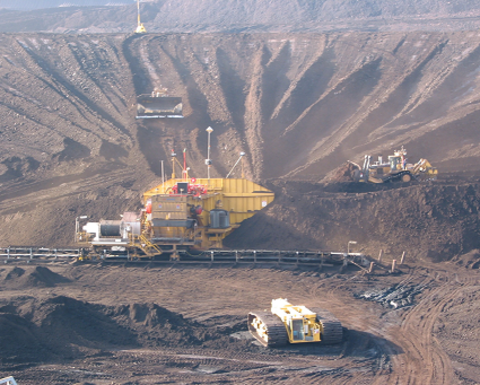 An IPCC system essentially replaces truck haulage with conveyor haulage by locating a crusher (or sizer) closer to the mining face. The crushing station is fed via a small fleet of trucks or directly via a loading unit such as a cable shovel or hydraulic excavator. Crushed (or sized) material is discharged to a conveyor system which transports the material to an ex-pit stacker or spreader unit.

IPCC systems were first introduced in the early 1960s by the quarrying industry. They subsequently grew in capacity to the point where, in the 1970s a number of mining companies began installing systems. Today, there are systems that are capable of throughput rates of up to 12,000t/h, making them highly applicable for waste removal in large copper operations, or coal overburden pre-stripping.

There are essentially three different types of IPCC systems: fixed, semi-mobile, and fully mobile systems. Fixed systems are constructed as an in-situ crusher station with a permanent pad and truck bridge. They are not designed to be relocated or moved.

Semi-mobile systems employ crusher stations based on modular designs that facilitate periodic relocation as a mine advances. Fully mobile systems are usually mounted on crawlers and are designed to be directly loaded by the loading unit as the mining face advances.

In the surface mining world, there are numerous examples of semi-mobile IPCC systems. These are installed in large South American copper operations such as Chuquicamata and Escondida in Chile, and at Shougang in Peru. IPCC systems have also been used to move coal overburden in a number of Australian (Clermont), Asian (Pinshao, Yiminhe, Baiyinha and Baorixile coal) and South African (Grootegeluk) coal mines. Examples of fully mobile IPCC system installations are fewer in number, with the most recent being Vale’s S11D project in Brazil.

The culmination of the mining boom in 2013 accompanied by a subsequent reversal in commodity prices, led to significant belt tightening with the mining industry and associated vendor market. Over the last four years, cash flow has been paramount for mining companies and most have faced severe capital expenditure (CAPEX) restrictions.

This has left mining vendors to re-evaluate product lines in the face of fewer sales contracts for new equipment and systems. Earlier this year, Sandvik completed the sale of its Mining Systems business which manufactured and supported bucketwheel, conveyor and spreader systems. Over the same period, other vendors have also significantly downsized their IPCC sales teams. Arguably, such divestment has led to a mining technology sector which is less capable of designing, implementing and supporting IPCC projects.

Nonetheless, recent innovations related to the use of dozers to push material into dozer traps as a means of feeding material onto conveyor belts have re-ignited interest in IPCC systems. This trend is being driven by greenfield projects in developed countries with high labour costs, as well as brownfield operations facing increased costs due to higher stripping rations. The evolving maturity of autonomous mining equipment is another factor forcing companies to re-evaluate IPCC systems. Semi mobile IPCC systems are highly suited to operations involving small fleets of autonomous trucks. Having a fixed dump location greatly simplifies the challenge of autonomous operations. The arrival of driverless dozers is also motivating companies to evaluate dozer push options to feed IPCC systems.

The barriers to implementing IPCC are well known and documented (see Dean et al. 2011). There are a number of preconditions for considering IPCC systems. Chief amongst there are inherent site and deposit characteristics: what is the unconfined compressive strength (UCS) of the material, and is it suited to crushing or sizing? Is there variable geology within the material that is likely to lead to crushing problems? Hard materials may not pass through sizers and may necessitate a gyratory crusher which will limits mobility options. The presence of clays in overburden materials can also lead to problems at conveyor transfer points.

Herein lies one of the problems: mining companies invest significant sums in characterising the mineral or energy deposit and not necessarily the overlying waste. If an IPCC system is to be a viable option, it is important to fully drill and characterise material in advance.

If a fully mobile system is to be considered, what is the shape of the deposit? Long, linear benches are necessary in order to minimise bench conveyor moves and maximise productive time. What is the topography of the site and is there a clear path for the conveyor route and dump site?

Mountainous topography can be a limitation as it increases the complexity of conveyor paths. Is there sufficient power available from the grid to power the IPCC system? In some locations, weak or unreliable power supplies may force a reconsideration of IPCC suitability. Are there ground pressure limitations on loading and spreading equipment? This may limit the available loading capacity.

Next, operational and maintenance characteristics come into the equation: is blasting required in advance of loading and how can damage from fly rock be prevented or mitigated? Can the footings of the crusher stations or conveyors be isolated from vibration damage? Can a two or three bench mining plan be adopted to keep the bench conveyor on a set horizon for longer periods of time requiring fewer relocations? How does this impact on the inter-ramp angle and overall stripping ratio?

Because they are essentially series-connected systems, the maintenance requirements of IPCC equipment are demanding. Overall system utilisation for fully mobile IPCC systems is between 4,800h and 5,200h/y. When compared to shovel-truck operating time, this appears low. However, Dzakpata et al (2016) analysed shovel and truck operating times across a number of coal operations in Australia and concluded that up to 45% of shovel operating time can be spent spotting trucks (excluding operating delays and standby). Thus the use fully mobile IPCC systems has the potential to actually increase valuable operating time for shovels.

Fully mobile IPCC systems decrease the flexibility associated with mine planning, both in terms of the ability to relocate the mining system to exploit different sectors of an orebody and the ability to scale-up or down mining operations to suit prevailing market conditions.

Recent research, however, is being directed at increasing the flexibility of IPCC systems (see Ingmarsson et al, 2016). There is also a lack of mining software to assist mine planning for IPCC systems. Current algorithms for determining ultimate pit limits and pit shells are better suited to truck-shovel operations, and research being conducted at The University of Queensland in Australia aims to address this issue.

Lastly, although IPCC systems promise significantly reduced OPEX reduction in the order of 50-70% per tonne, CAPEX remains a prohibitively high barrier for many operations.

Dependent on capacity and system configuration, a typical fully mobile IPCC system will cost between US$120 and US$200 million. Of this, a big ticket item is associated with the shovel and crusher station at the feed end of the system (approximately US$15 million + US$25 million = $40 million). The application of autonomous dozers to feed material to the conveyor offers the potential to significantly decrease CAPEX outlay.

As such, there is growing industry interest in the use of dozers to push material into dozer traps and a means of feeding low profile roll crushers or sizers. This is a very different concept from dozer push operations used in coal operations, where dozers are employed to push material to spoiling voids. 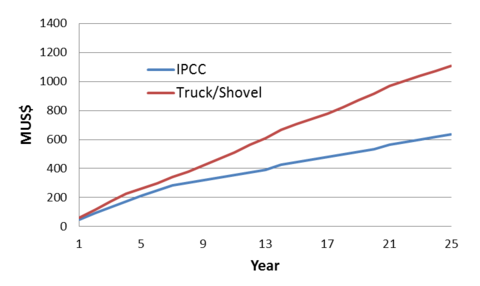 Dozer feed systems decouple the dependency that shovels or hydraulic excavators have when working in conjunction with fully mobile crushers. Semi-mobile dozer traps are relocated at frequent time intervals, every 10-12 days (see Figure 1). Such systems enjoy the effective utilisation benefits of semi-mobile IPCC systems while enabling a higher degree of mobility. In theory, dozer push IPCC systems should achieve in the range of 5,200-5,800 production hours per year.

In addition, bench height can be varied for dozer operations whereas it is strictly limited for shovel loading operations. This provides mine planners with more flexibility in specifying bench horizons. Dozers also provide for flexibility in double bench operations where material in the upper bench can be pushed to a lower bench for loading by alternative means. As Ingmarrson et al (2016) point out, dozer traps also be used in conjunction with truck dumping operations to further enhance the flexibility of mining options.

Dozer push to dozer trap operations have been implemented in a number of coal operations, including the Yallourn lignite mine (Medland et al, 2006) and Drummond Pribbenow mine (Atchinson et al, 2011). More recently, dozer traps have been gainfully employed at several mineral sands operations in Australia, namely Iluka Resources’ Murray basin Stage 2 and Jacinth-Ambrosia project, located near Ceduna, South Australia. In the latter example, the dry screening plan is integral with the mobile dozer trap system and capable of processing rates of up to 1400 tph (Beilby, 2009).

A recent paper by Ingmarrson and Oberrauner (2016) presented at the 2016 World Mining Conference in Brazil, concluded  that, on the basis of a number of client case studies, over a mine lifetime total costs (CAPEX plus OPEX) per tonne for dozer push IPCC systems would be 35-43% lower than corresponding truck-shovel operations (see Figure 2).

The first Australian full-scale production trial of an autonomous Caterpillar dozer began in Queensland as recently as July 2017. Driverless, or autonomous, dozers are likely to be a further game changer for dozer push IPCC systems. Not only will they enhance safety, but, by not requiring operator and shift breaks, they will enhance production hours and lower IPCC system CAPEX and OPEX requirements.

In 2012 a research group was established within the School of Mechanical and Mining Engineering at the University of Queensland to focus on issues related to IPCC systems. The group collaborates extensively with several key OEMs and a number of hard rock and coal mining companies. The group is currently comprised of three leading academics, five PhD students and a masters student working on IPCC related topics.

Through this programme, The University of Queensland hopes to fill some of the key knowledge gaps related to IPCC systems and drive the implementation of safer, more energy efficient and lower cost mining systems.

IPCCs can lower costs and increase productivity at the same time

FLSmidth on mission to reduce emissions, water use