The large Jiangzhuang coal mine in the Shandong province of China is getting a helping hand with its mission to have a working environment with zero accidents from Hikvision, which has placed a smart video surveillance and control system at the operation 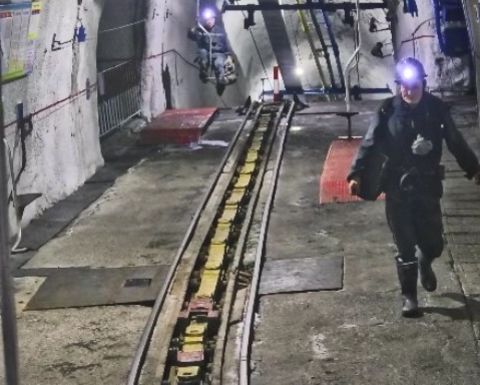 The mine view with Hikvision

The mine, which produces more than 1.8Mt/y of coal and has a footprint of 43km2, presented a need to have practices and production monitored every moment of every day to minimise accident risks.

The quandary: an ageing system that made monitoring difficult in the mine's key areas.

"We need to respond immediately to unsafe situations in the mine, whether they are caused by environmental factors, poorly performing machines or employees not following authorised work procedures," mine dispatch office director Kong Qingwei, said.

He noted that its previous system involved monitoring of about 30 screens with sub-optimal quality thanks to low light or spots of light pollution.

"This made our jobs extremely difficult and tiring, as well as impacting our ability to respond to safety issues quickly enough."

Officials did not indicate when the Hikvision solution was installed, but said it has helped with imaging, even in those areas of too little or too much light, giving quality and clarity to view hidden risks more quickly.

System producer Hikvision said, in addition to the improved imaging capabilities, the solution features deep learning technologies to identify and respond to problems automatically and in real time.

"Specifically, the cameras can identify when employees deviate from approved work procedures and send alerts to the safety team to ensure staff can be deployed before accidents occur," it added.

The system designer reported that, in the first three months the system was placed at Jiangzhuang, Hikvision has been able to spot more than 30 deviations from its safe operating procedures.

"In the past, many of these safety risks could have gone unnoticed," mine deputy chief engineer Zhang Liu said.

"However, the Hikvision system has allowed us to identify every incident in real time and to take immediate action to protect our workers, which is a hugely satisfying outcome for us."

It also can collect an accurate record of the details of safety incidents so it may be analysed later; playback and download functions allow for review at any time.

Hikvision supports specific mining-safety applications as well, including those that monitor surface water levels in different areas of the mine.

The company adds that Hikvision can be used to improve safety in other potentially dangerous areas, such as inclined tunnels. In fact, Qingwei calls it an "intelligent eye" for the entire operation.

Zhang Liu added: "This is a classic example of how automation can help to improve mine safety, while also reducing the tiring workloads associated with manual monitoring of screens."

Strata links up with Geoverse for new level of LTE/5G

ABB on mining trends in 2021 and beyond.

Strata links up with Geoverse for new level of LTE/5G