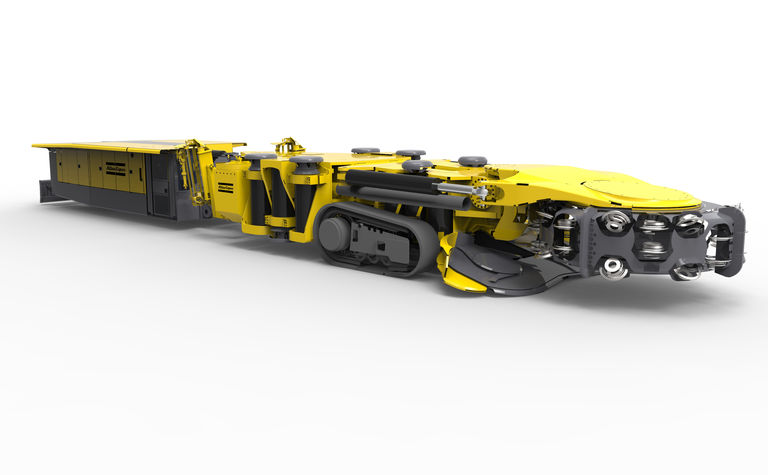 Strategic drivers within the mining industry, such as an operational shift from open-pit to underground mining and a greater interest in mass-mining techniques as well as an enhanced focus on safety, mean that miners are now seriously interested in drill-and-blast alternatives for mine development.

Mechanical rock excavation has had limited success so far in the hard-rock mining industry, mainly due to difficulty with cutting tools in highly competent and abrasive rock formations, but also because standard equipment does not possess the flexibility to cope with the variable nature of the rock, the geometry of mineralisation and the layout of an underground metal mine.

However, the potential that mechanical cutting holds for creating faster accessibility to orebodies and significant reductions in development costs if these challenges can be overcome is phenomenal.

Large-scale explosive-free rock-breakage techniques are being investigated by major miners, including Agnico-Eagle, AREVA, Barrick Gold, CAMECO, IAMGOLD, KGHM, Vale and Rio Tinto. These eight companies, along with Hydro-Quebec, the Societé de Recherche et Développement Minier (SOREDEM) and CanmetMINING, formed a co-operative in 2012 to develop a toolbox of technologies for underground development at significantly higher advance rates than, but at the same cost and order of magnitude as, drill and blast.

Four projects were identified that centre around current state-of-the-art intellectual property related to technologies, ultrasonic rock breakdown, microwave rock weakening and thermal fragmentation. The latter two projects were designed to develop a technology to weaken the rock ahead of mechanical cutting.

Aside from this co-operative, others miners and OEMs are developing their own concepts, either singularly or through collaborative innovation projects.

Rio Tinto’s Mine of the Future project is one of the best known. In 2010, the company announced partnerships with three equipment producers to develop new systems for deep underground mines.

Aker Wirth and Atlas Copco worked individually with Rio Tinto to develop two new tunnelling boring systems (TBS) for horizontal infrastructure development, and Herrenknecht created a shaft-boring system (SBS) for vertical infrastructure development. All three concepts are the result of civil tunnelling industry technologies, combined with input from Rio Tinto mining experts and contractor partners Redpath and Cementation. Rio estimates that by combining the benefits of the three systems, it can reduce the construction period of an average block-cave mine by at least 40%.

Through its FutureSmart programme which was established in 2014, Anglo American has over 50 different initiatives under way to find safer, more efficient, environmentally friendly and, ultimately, more sustainable ways to mine. The Rapid Mine Development System (RMDS), which was developed with Atlas Copco, is one of these.

Based on traditional tunnel-boring machine (TBM) technology, the system aims to secure rapid access to the orebody and safely develop infrastructural mine tunnels for mechanised mining in hard rock.

Donovan Waller, group head of technology development for Anglo American, explains to MM: “The equipment is being developed to be able to rapidly, cost-efficiently and safely develop low-profile tunnels in hard rock. It differs from the conventional TBM by offering the same performance but with a flat roof and rectangular tunnel cross-section. Conventional TBMs drill round tunnels, which are not suitable due to a need for flat floor for mine vehicle traffic and a flat roof for stability purposes.”

The machine features standard TBM-type steel cutting discs, and has the potential to cost-effectively cut abrasive rocks with a unconfined compressive strength (UCS) of up to 250MPa.

Dragan Janicijevic, project manager for mining and engineering technology at Anglo American, explains how the collaboration came about in 2012: “Under the FutureSmart approach, Anglo American was looking for a development party that would join forces with its technology team to develop various hard-rock cutting solutions.

“In developing this concept together we have proven the tremendous benefits that can be gained by this type of collaboration. Atlas Copco technical know-how combined with Anglo American’s skills as a mining company have proven to be a very worthwhile combination.”

The prototype system will undergo first trials at a test mine later this year, and will later prove itself in a real operating environment, according to Mikael Ramstrom, manager of global strategic projects and alliances for Atlas Copco.

After the system has been operationally proven, it will be made commercially available by Atlas Copco to interested parties.