Nevada Copper, which said is it still on target for steady-state production of 5,000 tons daily from its Pumpkin Hollow underground copper project in Nevada, US, by the September quarter, is forging ahead to meet major work milestones. 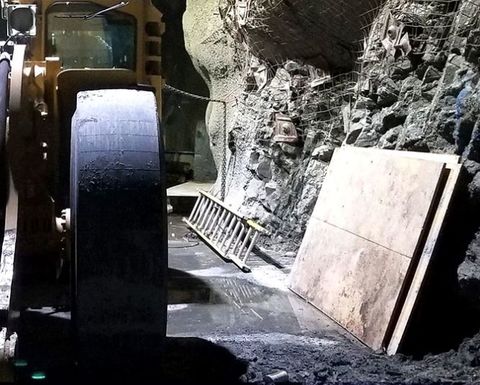 Underground at Pumpkin Hollow in western Nevada, US

In an operational update, the mining operator said that it has completed commissioning of the mine's hoist at the main shaft, and the hoist is capability of managing the target material goal of 5,000t/d. Automation of the auxiliary hoist, while not crucial for the steady-state target, is also nearly complete.

Additionally, the repurposing of the East North ventilation shaft is ongoing and on schedule; work there is tied to crews' installation of the mine's surface ventilation fans.
Ventilation system upgrades for the underground project are making headway on schedule, with two additional fans now being installed underground and another two to be put into place in May.

An order has been placed for two large permanent surface fans; they are scheduled for installation in the September quarter.

The significant electrical upgrades and expansion needs, key to the ramp-up of the mine's production goal, are now complete. The upgrades were designed to provide sufficient electricity to power additional operational equipment and ventilation supporting of the ramp-up.

Pumpkin Hollow's mobile fleet additions were deployed in February. The final items of equipment will be in just sometime during the June quarter.

The mine's first stopes are anticipated to be extracted in the coming weeks. This turn will likely lead to a grade increase from the developmental ore currently being processed, it said.

"We are very pleased to have recently completed both commissioning of the Main Shaft and electrical system upgrades, two important steps towards achieving nameplate production," CEO Mike Ciricillo said.

"The remaining step, ventilation upgrades, is progressing well, and we remain on target for steady-state production of 5,000t/d in Q3 this year. With the underground project expected to be ramped up to full production in Q3, we look forward to advancing…our fully permitted open pit and property exploration targets."

The underground portion of Pumpkin Hollow has an expected mine life of 13.5 years.