Digital mapping is here, there - everywhere

Ron Reid, Harmony Gold group resource geologist in South East Asia, has provided a warts-and-all, real-world view of the value of today’s digital mapping smart-phone Apps, communications, and software to the average (under) active field geologist, wandering around the jungle, looking for signs of that elusive pot of gold. 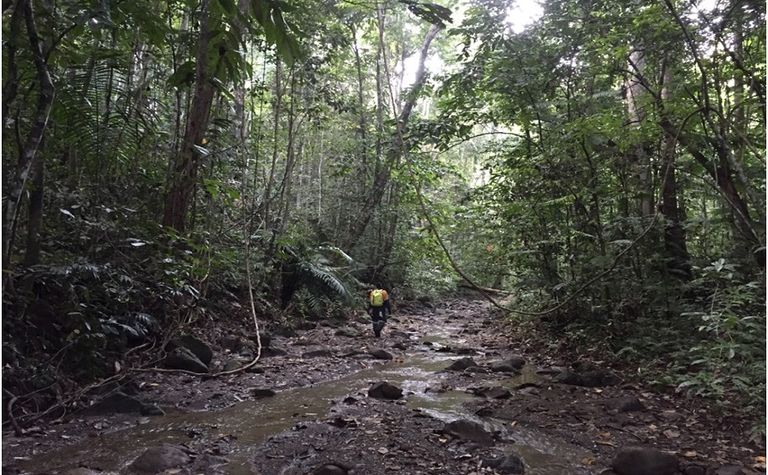 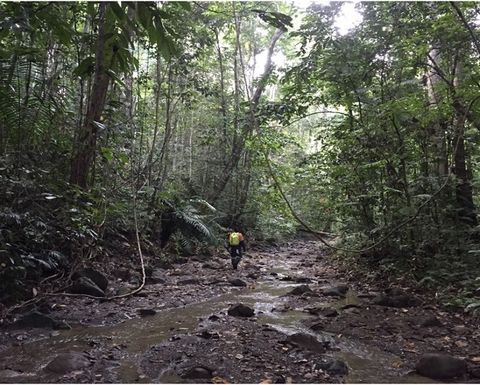 There is a popular perception that a smart phone needs a phone network to locate itself: Not true

As all field geos know, the worst part of field mapping is the transcribing of your manually gathered data, faithfully recorded in your field notebooks onto maps and into spreadsheets at the end of the day before you get a chance to asses it. On a recent, and these days rare, trip into the field to conduct some geological and structural mapping I took the opportunity to trial one of the digital geological mapping Apps you can now install on your iPhone or Android device.

For this exercise I settled on Midland Valley’s Field move Clino installed onto my iPhone 6, although this is just one of a number of apps available and I am sure those in the know will have their own favourite. Clino is a more feature-filled package than some of the others with the ability to load base maps, sketch in polylines and outcrops (unfortunately not available on the Android version), take measurements of all types, review data on the stereonets and map and take notes and annotate geo-located images.

I was somewhat hesitant to rely completely on the iPhone so I did include my field notebook and had my old Brunton clipped to my belt. Probably a sensible precaution as technology always fails at the most inopportune moments, and the field notebook and Brunton (or insert your geological compass preference here) allows you to carry on with your day should your phone pack it in. On this note it is another good habit to download your data to a computer, or up to the cloud (or both), at the end of every day – or even at lunchtime if your phone plan and reception coverage allows it without mortgaging planet Earth.

On this exercise I was working in the jungle, which anyone with experience knows is particularly harsh on everything (feet and hands included!), so evening back-ups were essential.

Setting up a new project in Clino was simple and I am sure the same could be said for the various other Apps available. Two things straight up that were important to remember was to ensure the magnetic declination was set and that the GPS locates you in the correct part of the world. I made this mistake playing around and ended up not noticing that the location service was off and my measurements were all on the wrong continent! As part of the set-up you can individualise your location numbers, set the various units and options and basically customise the program. You can also load various maps and plans should you wish but they are required to be in MBTiles format which is not easily generated (unless you have purchased a program with the capabilities of doing so). The default uses Google Maps images/street maps which accomplish the job.

You can also set up your “stratigraphic column” as a set of coloured units/rock-types which you can easily assign when taking your measurements (although I found the knuckle on my little finger had an annoying habit of generating new rock units whilst I took a measurement ...).

Data collection was as simple as first ensuring the GPS was active using the GPS activation icon (turning it off between localities is a good idea as it can chew through battery). You then create a new locality, select the measurement type and rock unit, then place the phone on the outcrop and tap the screen.

It seems there is a popular perception that a smart phone needs a phone network to enable it to locate itself. This is not the case and the phone always knows where it is, assuming it is on and has access to satellites. That said, having the GPS active all the time is a battery killer – especially when in mountainous and forested terrain.

If happy with the measurement you select save and then take another. If you are a joint recorder (such as an engineering geologist or someone not dealing with rocks that have been folded, thrusted and folded again) you can take many joint measurements in a very short period of time, all saved into the database and then you can build up a detailed picture of the joint patterns without the significant amount of time required to manually record and then enter all this data.

We are always taught to take 3-4 measurements of a surface (bed, fault, etc) and averaging the result but who can hand on heart say they do this all the time with a straight face? 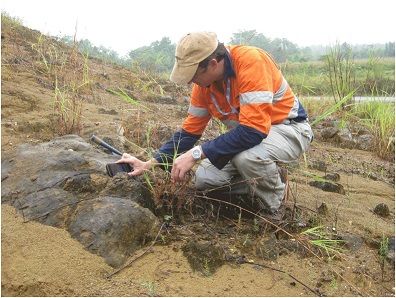 With this system it is easy to take four measurements from different parts of the surface inside seconds, and a mean plane calculation generated automatically to boot. I took several measurements from a fault plane and then a series of slickenside measurements as well. Look at it all in the stereonet and you have an immediate in-field validation of the accuracy of the measurements and a good handle on the fault movement, something that is easily checked again and understood as you are in the field and on the outcrop, not sitting at a desk wondering if that measurement is correct.

The ability to add geo-located notes, geo-locate images with notes as descriptions, and add comments to each of the measurements, means you have an ongoing ‘notebook’ with all the required data tagged and collated.

Back at the camp

Once you have settled back at camp and the Luddites are settling in for several hours of hand entered data you simply connect the phone to the laptop, export the project – both to csv and to Google Earth KMZ for instant gratification – and copy it to your laptop. The data is bundled up into a project folder with separate csv files for the localities, planes, lines, images (including comments), polylines, etc. Further, a new folder drops out containing all your images with file names linked to the image.csv file.

All location data is in WGS84 Lat and Long and WGS84 UTM co-ordinates which makes it easy to plot the data up in your preferred flavour of GIS/GMP/Structural Analysis programme. Line measurements are saved with plunge and plunge azimuth, plane data is plotted as dip and dip azimuth and strike (using the US right-hand rule). 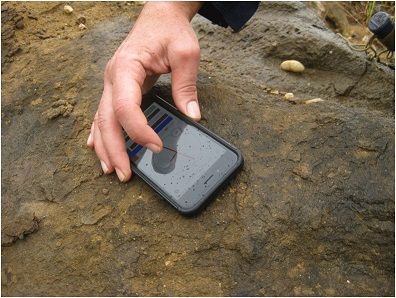 My data below was filtered and brought into Leapfrog Mining where a series of form surfaces were generated detailing the patterns of the folded bedding within the sandstones. That was plotted up using Micromine’s Stereonet functionality to assess the data, all within half an hour of being back in camp.

This gave us a near-instant understanding of the structural geometry and allowed us to build on the model as we went, targeting the next day's mapping to answer specific questions.

The Google Earth KMZ export contains everything, measurements, images, notes and locations which allows you to immediately view the data, click on the images and recall the notes and commence planning the next day’s traverse using Google Earth

This is true ‘smart mapping’.

The ability to view images and notes in Google Earth really assists in the thinking of the day’s traverse and planning the next.

The good, the bad, and the ugly

Overall I found the ability to rapidly map various datasets, tag photos and add comments a great productivity gain and indispensable in the field.

I started off taking manual measurements with the Brunton and recording them manually but very rapidly found that the accuracy differences were minimal and well within my abilities of taking consistent measurements with the Brunton and the additional time required in taking duplicates with the Brunton was excessive. The notebook very quickly became relegated as somewhere to keep my outcrop sketches with notes recording the various aspects of the outcrop and somewhere to sketch out thoughts on the go. Throwing the data into the stereonet in the field was a great validation tool and significantly increased the ability to build the 3D model in my brain as I worked. To be able to be viewing the data in context within minutes of getting back to camp and further building on my model without the endless hours if manually entering data was again a huge boon.

The programme did tend to crash a bit, typically when swapping between map view and the stereonet.

But that was not a huge issue given it opened again instantly and no data was lost – the only data consistently lost was when I forgot to click save after taking a measurement.

The main issue around the crashing was that the stereonet by default loads all your localities – which might be several hundred measurements requiring you to manually turn off each measurement one by one. If there is a faster way I could not find it and believe me I looked! The default should be either nothing loaded or the last locality only as it can be a pain ticking off all the measurements.

The GPS is particularly heavy on the battery, not a huge deal if like me your brain overheats by about mid-afternoon and you have to call the day quits as the phone will generally last that long (the iPhone6 I trialled anyway). To last a whole day I found I had to turn the GPS off after completing an outcrop and then switch it on again and wait for it to catch up at every new location.

I only forgot this once or twice and proceeded to record a bunch of measurements at the wrong locality.

If you have spotty phone reception keep the phone in aeroplane mode. The phone will still locate the satellites and place itself but the constant searching for a phone network if you have poor coverage will kill your battery rapidly, combined with the GPS receiver drain and you might be lucky to make mid-day.

This review specifically targets the act of digital mapping rather than the App itself and only covers Midland Valley’s Fieldmove Clino. But other apps available for iPhone and Android include Lambert, GeoID, Rocklogger, PocketTransit, Lister, GeolCompass, and possibly others.

All these come with various price tags and some have “in-App” purchases and you need to be aware of these.

The free version of Clino advises you when you start it up that there is a paid version, and again when you select the stereonet (only available in the paid version), otherwise there are no pop-up adds. A search of either the App store or Google Play for stereonet programs or Geological Mapping apps will show you what is available.

So while I would not advocate leaving the old technology at home, I feel the time has come to leave it clipped to the belt and brought out for specific and targeted checks and as an emergency back-up should the phone die, or run out of juice, or decide a swim is called for.

The future is digital and it just might be time to grab it.

*This is an edited version of an article that appeared originally at http://www.orefind.com/blog/

These custom maps will increase worker safety as well as efficiency, Here said.