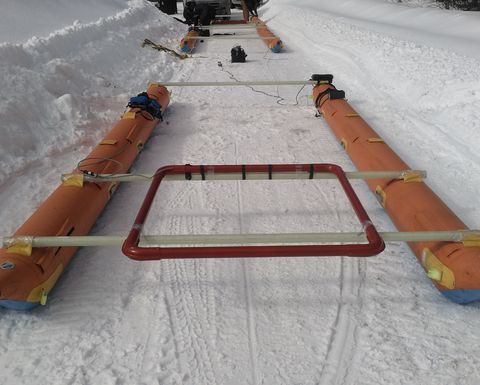 This survey is being done on Rang St-Gustave Road in St-Simon-les-Mines, which is located in the Beauce region of southern Quebec, Canada.

Patrick Levasseur, president and CEO of Beauce Gold Fields, said: "Using this new state-of-the-art exploration technology will add to our understanding of the geology and help us reach our goal of finding a hard rock source of the famous Beauce's placer gold deposits."

This technology measures electrical chargeability (induced polarisation) and electrical conductivity at a horizontal resolution of 15cm. In addition, it allows a vertical penetration at depth to the order of 200m. The method is optimal for detecting narrow orebodies (auriferous zones) and for prospecting within conductive geological stratums that are particularly frequent in the Beauceville Formation and throughout the Bellechasse gold belt.

The geophysical team currently consists of a team from the INRS (Institute National de la Recherche et des Sciences), led by Professor Marc Richer-LaFlèche, and two geophysicists from Aerogeophysica Surveys (Russia). The work is a continuation of the geophysics that has been carried out by HPQ Silicon in the sector since 2017. The primary objective of the geophysical survey is to identify potentially mineralised zones that could possibly be the hard rock source of the gold contained in the placers of St-Simon-les-Mines.

Technology-agnostic automation seen as the way forward at Granny Smith.