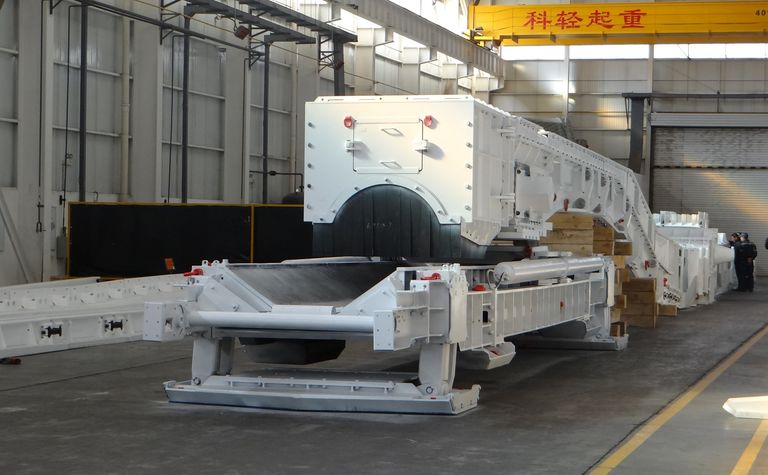 A Cat transfer station for the longwall system

Previously the facility, located in Hebei Province, China, had produced only line pans for AFC systems. The company stated that producing the first full AFC system marks a milestone in the facility’s evolution as a key mining equipment manufacturing plant for Caterpillar and the region. Langfang premium longwall products will serve mining companies worldwide.

The new Cat AFC has been delivered to the Datong Coal Mine Group (Tongmei) for use in the Dongzhouyao mine in Shanxi Province. Datong is the third largest state-owned coal mining enterprise in China. Tongmei Group, the parent of Datong, first acquired an AFC in 2004 from the company that is now Caterpillar, and is the largest AFC customer globally for Caterpillar. The new AFC system marks the 39th delivered to Chinese mines by Caterpillar and its predecessors in the longwall equipment line.

The system is designed for longwall top coal caving (LTCC) to mine a coal seam as thick as 8m, and the face length will be 260m. The LTCC mining method enables thick seams to be recovered economically by cutting the lower portion of the seam and then recovering coal that caves as the face moves forward.

Cat conveyor components in the factory

The premium face conveyor is composed of Cat PF6 line pans. The modular design separates wear-resistant hardened steel parts and the substructure made of high-strength steel. The design enables easy replacement of wear parts without damaging the substructure. The front AFC has transport capacity of 2,500t/h, and the rear AFC has capacity of 3,000t. In addition, each of the conveyors has total installed power of 2 x 1,050kW. The beam stage loader is a Cat BSLPF6 with capacity of 3,500t/h and 600kW installed capacity.

WesTrac China, the Cat dealer in northern and north-eastern China, delivered the system and will provide service and support through its facilities and personnel based in the region. WesTrac China’s network encompasses more than 60 branches, including a rebuild facility in Tianjin. Total staff is now more than 1,500 in China.