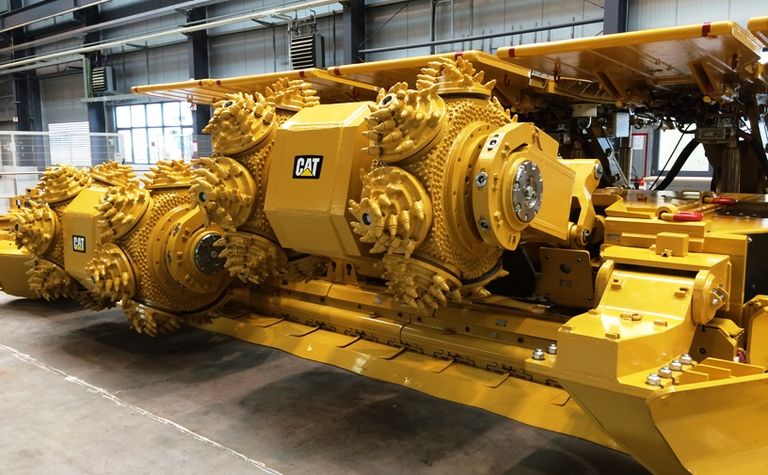 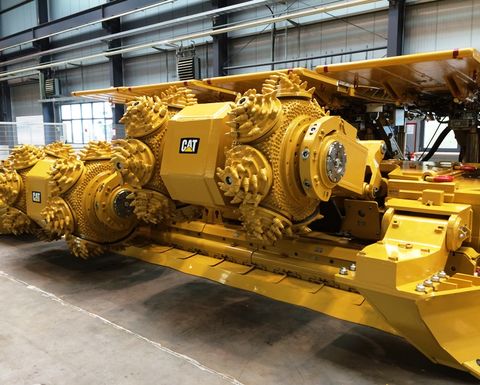 I can count on one hand the number of times in my career as a mining editor that I have been shown a totally new machine. I’m not talking about technology that has been repurposed from another industry, or innovative developments for a truck/shovel/drill rig. I mean totally new.

I recently had the privilege of visiting Caterpillar’s new underground hard-rock training facility in Lünen, a town in North Rhine-Westphalia, Germany, and it was here that the development in question was unveiled.

The region has a rich coal mining history and the site was originally home to the Westfalia company in the 1800s, before being transferred to DBT, Bucyrus and now Caterpillar’s ownership.

Caterpillar’s new technical training team moved into assembly hall number six in January this year. The 3,200m2 hall had previously been used to assemble longwall shearers but was refurbished to offer the team three machine bays for technical demonstrations, three classrooms for desk-based learning, and a fully equipped workshop for repair and components training. 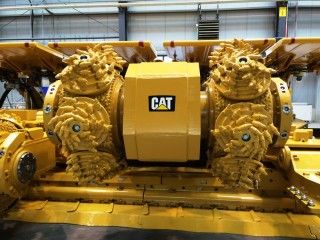 Ulrike Beckmann who heads up the new training centre, explained why Caterpillar set up this particular facility. She explained that the technologies and skills set required for underground hard-rock mining are totally different to those needed in surface or underground soft-rock mining. The company spoke to its dealers, many of whom hadn’t been involved with underground hard-rock mining up until now, and it was decided that in order to properly support customers and enable them to achieve optimal machine performance (and maximum economic benefit), a new training programme was required.

“Our machine systems are complex,” said Beckmann. “They comprise several components that must work together in order to form a fully functional system, and it is not possible to train operators and technicians adequately with just classroom-based activities. We need access to hardware.

“Although our Rock Flow and Rock Straight systems are being tested in the field, it would be difficult to coordinate visits and production stoppages in order to train customers. We need to be prepared for dealer training requests as and when they occur.”

And so the decision was taken to establish an onsite training facility at Lünen. The facility is now home to four dedicated instructors, supported by service technicians and subject matter experts in areas such as automation, as well as the management team. It was officially opened on April 18, a few days after my visit, and is aimed at educating four target groups: internal Caterpillar sales and support teams; dealers; customers; and Cat Reman teams which offer refurbished components to the mining market.

“We see training as a continuous process,” explained Beckmann. “In order to master our systems, we provide our students with web-based, classroom and hands-on training modules. They can then take this knowledge back to their workplace and continue training on the job.”

Beckmann also mentioned that in order to enhance its training capabilities, the technical team is considering adding a 3-D simulator in the future for operator and safety training. Talks are underway with a US-based IT partner, although planning is still in the early stages.

The Rock Flow system which was first introduced at the MassMin 2012 event in Sudbury, Canada, is primarily designed for continuous haulage in caving operations. It was developed in conjunction with Codelco to address the future needs of the Chuquicamata block cave and combines a rock feeder, a rock mover and an automation system to deliver faster, safer production than LHD- scoop methods.

Each RF300 rock feeder extracts ore from a drawpoint at a rate of 300t/h and feeds the material onto the rock mover- a hard-rock chain conveyor- by a hydraulically-operated push plate. The RM900 rock mover collects ore from various drawpoints and the whole system is controlled remotely from the surface.

The system was first tested at the Andina copper mine in Chile under the guidance of Finning, Caterpillar’s Chilean dealer, and has now been operating for 4-5 years. Following the success of the first trial, 32 feeders and 4 conveyors (each conveyor is supplied by eight feeders) are currently being installed at El Salvador mine ready for commissioning in late 2016. The Rock Flow system is commercially available, although orders are yet to be booked, and Caterpillar hopes that the El Salvador system will serve as a reference for other customers.

Caterpillar’s current focus, and the cause of my earlier excitement, is the Rock Straight system, a longwall-style continuous mining system for hard-rock operations. This is due for its official launch in June and will be the star of Caterpillar’s MINExpo exhibit in Las Vegas in September. 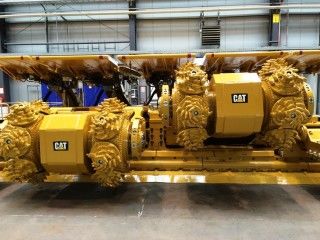 Steinberg explained that the concept of continuously cutting hard rock has been under investigation for a number of years.

“It took a while from R&D to cutting tests in Australia and platinum in South Africa before the product was developed,” he said. “Eventually the hard-rock cutting department was formed, and now we have 200 employees.”

The idea was to capitalise upon Lünen’s history and expertise in producing longwalls for soft-rock mines and apply that knowledge and skills set to the hard rock sector. “We wanted to make the benefits of continuous mining available to hard rock customers too.” Frenzel explained.

Replacing drill and blast activities with continuous cutting and a high degree of remote control offers many benefits. These range from higher productivity and utilisation to lower maintenance costs and fewer safety issues, particularly those associated with the transport and use of explosives. As such, it is a concept being investigated by a number of vendors including Joy Global with CRC Mining, Sandvik, and Philippi Hagenbuch.

The Cat Rock Straight system is the first to be made commercially available. It comprises three key elements: cutting, haulage and roof support, all supported by automation.

At the heart of the system is the hard rock miner cutting unit. The HRM220 is fitted with two independent, hydraulically adjustable cutting units. Each unit features two cutting wheels with a number of picks mounted on rotating heads. Each unit is driven by a 132kW motor. The cutting units are positioned to accommodate seam heights from 1.3-2m and utilise Caterpillar’s Activated Undercutting Technology to shear the rock; it is the position of the head and cutting picks in relation to the rock face that is key to this technology (see box).

The HRM220 uses an MMC unit for control and monitoring with central control components and data logging. It is supported by HRS1220 roof supports- a two-legged shield that features a solid base with advancing mechanisms on either side- and the HRC30 apron face conveyor which uses pans to carry the ore across its length rather than dragging the material across a belt.

The system is primarily designed for the extraction of flat, tabular deposits and reefs of gold, copper, PGEs and chromite. Frenzel explained: “many of these deposits are situated in remote locations. It’s hard to find skilled labour in these places for traditional mining techniques. Rock Flow and Rock Straight can be remotely operated by one or two people at the surface, or from the operator cabin at the end of the machine, thus lowering mining costs and improving safety.” 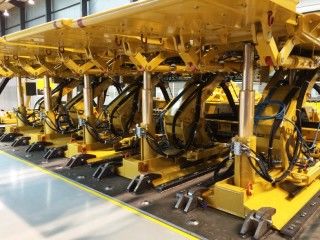 The maximum face length is 100m, although shorter systems can also be configured to suit the pillar arrangements and rock mechanics at individual mines. Cutting units on the HRM220 can be staggered to accommodate different seam heights; the first unit is usually positioned higher up for cutting and the second lower for loading. Because the floor is cut by the lower unit it leaves behind a very smooth, even surface. This makes collection of fines easy in applications such as platinum, and a small brush or dozer blade on the lower unit sweeps these on to the conveyor for collection. A water spray can be added for dust suppression if necessary.

Installation time depends upon the location of the operation and availability of skilled labour; with the right team in place, the system could be installed in as little as ten days. The modular system components are much lighter than a traditional longwall (a shield weighs 11-12t) so once underground the modules can be easily moved with haulers.

The first system is currently undergoing trials at KGHM’s Polkowice copper mine in Poland (it was there in 2012 when MM visited, although I was not permitted to see the machine). Here, artificial timber or concrete pillars are installed behind the shields as they progress, preventing the roof from caving as would happen in soft-rock room and pillar mines. KGHM is currently retreat mining and has extracted 45,000t of ore from the first panel, although advancing of the face is also possible with Rock Straight. Backfilling would require a different type of roof support which Caterpillar is currently working on. “The technology is available,” said Steinberg “If requested we can add it to the portfolio.”

KGHM will also carry out a follow up test in a second panel to confirm the economics but results so far look “very promising” according to Steinberg. A large part of the deposit at KGHM sits below 2m, so the Rock Straight system offers a very competitive cost curve compared to drill and blast.

“Ultimately, the cost per tonne and total cost of ownership need to be lower than what the customer is doing today for the system to be successful,” Steinberg added.

Demand for Rock Straight will primarily be driven by the geology of certain deposits, and Caterpillar has identified the Zambian copper belt, European copper shale and Bushveld complex as key sales areas. Dealers Bergerat Monnoyeur, Barloworld Equipment and Borusan Makina will be the first to benefit from the new training centre accordingly and, with the order books opening in June, it will be interesting to see how the industry reacts to such a new and unknown quantity.

When I visited the Lünen facility, the Rock Flow and Rock Straight systems were installed and ready for action, but the third machine bay sat empty. In the centre and, rather frustratingly, off limits, was a small model of the machine sat on a little pedestal, along with a full sized version of the cutting head.

The team told us that the machine was still “in the NPI (new product introduction) phase” and was currently being tested. When pressed, they hinted that tests were taking place at a new Caterpillar testing ground located somewhere in Europe…

Something tells me we will be hearing a lot more about this particular development at MINExpo in September.