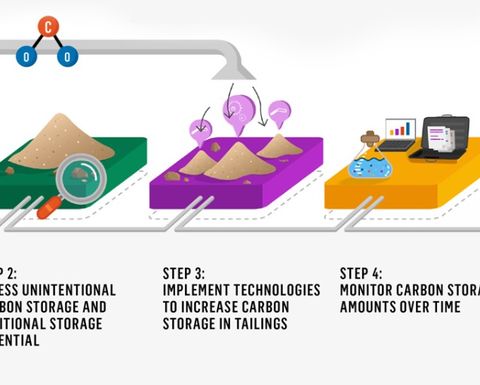 The company’s scientists are working in close collaboration with a team of scientists to investigate the potential to store large volumes of carbon at its diamond mines through the mineralisation of kimberlite tailings, the material that remains after diamonds have been removed from the ore.

De Beers Group will investigate the storage potential across its diamond mines globally. According to the diamond company, this is the first time such extensive research has been undertaken to assess the carbonation potential of kimberlite, a rare type of rock that has been found to offer ideal properties for storing carbon through mineral-carbonation technologies.

The project aims to accelerate what is already a naturally occurring and safe process of extracting carbon from the atmosphere and storing it at a speed that could offset man-made carbon emissions. Scientists estimate that the carbon storage potential of kimberlite tailings produced by a diamond mine every year could offset up to 10 times the emissions of a typical mine.

“Mineral-carbonation technologies are not new, but what is new is the application of these technologies to kimberlite ore, which is found in abundance in the tailings at diamond sites, and which offers ideal properties for the storage of very large volumes of carbon.

“As part of the project, we are looking at how these existing technologies can be modified to develop specific solutions suitable for storing carbon in kimberlite tailings.

“The research is in its early stages and it may take some time before it is economically or practically achievable to tap into this full storage potential. However, even just tapping into a small amount could greatly reduce the net emissions at many of our mine sites in the near future, and possibly lead to carbon-neutral mining at some sites within the next five to ten years.

“As technology improves over time, more and more carbon could feasibly be stored in kimberlite tailings, meaning we could ultimately offset more emissions than we are producing.”

Mineral carbonation is a natural or artificial process whereby rocks at the Earth’s surface react with carbon dioxide sourced from the atmosphere and lock it away in safe, non-toxic, solid carbonate materials – taking that form in kimberlite rock in this instance.

The work being undertaken by the project team could have significant applications for the broader mining industry, as the ideal carbon-storage characteristics of kimberlite rock are also found in rocks mined for other commodities, such as nickel and platinum, the company explained.

De Beers Group CEO Bruce Cleaver said: “By replicating this technology at other mining operations around the world, this project could play a major role in changing the way not only the diamond industry, but also the broader mining industry, addresses the challenge of reducing its carbon footprint.

“By investing in ground-breaking projects such as this, aligned with the FutureSmart Mining innovation programme of our parent company, Anglo American, we have the real potential to leave a positive, long-lasting legacy for the global mining industry.”

De Beers started the project in 2016. A key part of its early work was centred on supporting academic-focused mineral carbonation studies of old (pre-1912) and recent (post-2008) kimberlite tailings samples from Voorspoed mine in South Africa, which provide a great ‘natural laboratory’ for understanding carbonation reactions in kimberlite