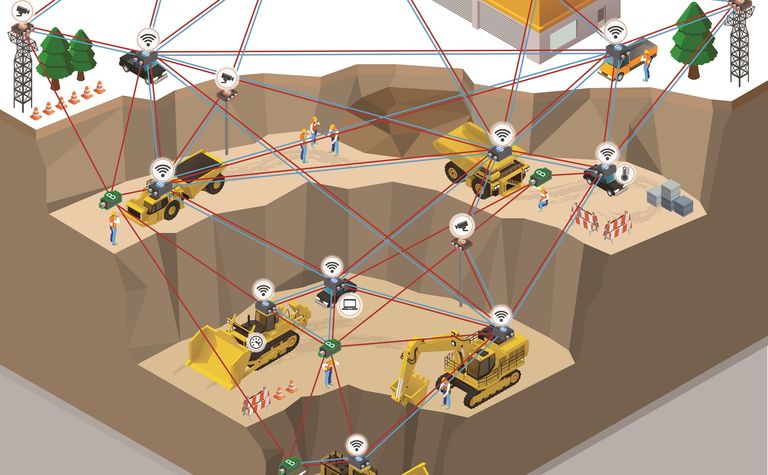 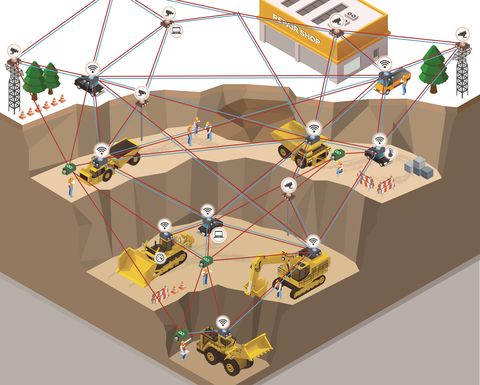 Every mining operation varies based on what it is extracting and where it is located, but what is common to each is the need for a robust communications network.

Wireless communications networks transport data, voice and video, supporting applications that are essential to efficient and safe mine operations. Many mining operations are now part of the Internet of Things: Wireless radios and sensors are placed on each and every asset, including vehicles, shovels and pumps, and connected to a network, allowing operators to see each asset’s status, efficiency, maintenance needs and more.

A single mining communications network must simultaneously support a range of applications, including:

Fast, resilient wireless networks are ideal for providing the real-time data behind these processes – but as with any technology used for mission-critical applications, there must be a way to ensure the network always functions.

This is especially important in mining, because even short periods of operational downtime can result in hundreds of thousands of dollars in lost revenue. According to mining communications technology company 3D-P: “Downtime can cost … more than C$10,000 [US$7,300] an hour if [a mining organisation has] a mining shovel that isn’t digging.”

Safety, too, is paramount in any mining operation. Operators require communications systems that quickly and reliably deliver control inputs to the machines they are running. If equipment does not stop in time, it can cause accidents.

In any network, changes in performance can creep up over time without detection, until one day a threshold is crossed and suddenly the network is not functioning properly. Manually tracking down an issue can be complicated; sometimes the cause of the problem is something that happened a long time ago, or is an aggregate of smaller problems that individually are innocuous, but create performance issues when combined.

A wireless network may start to behave differently if a new piece of equipment, such as a truck or drill, joins the network and creates extra traffic. A user may be unaware that adding a certain application or piece of equipment to a network would affect it, and so would not think to ‘unplug’ it or adjust settings to put things straight. Applications like surveillance video streams can create radio frequency (RF) interference on a network without even joining the network.

Mining assets also are often part of a communications network, which can add to interference. Operations in remote locations use both autonomous and distantly remote-controlled trucks to boost productivity. These huge, driverless trucks transport material around mining sites and can run 24 hours a day, replacing high-risk jobs in harsh working conditions and extreme temperatures. Drills and other equipment, too, can run autonomously or via remote access control – but only if the network remains stable.

If the network suddenly malfunctions, it can impair operations, and can even impact operator safety. Reliable communications between the operator and machines, or between machines and control centres, must be maintained to ensure safeguards are not tripped, causing equipment stoppage or accidents.

A monitoring and diagnostic system can help prevent accidents and expensive shutdowns by providing a running baseline of how a network is functioning currently, as well as how it has been functioning over time.

These types of tools can detect – and head off – any issues with a wireless network. If a network starts having issues (for example, if voice traffic is choppy or data transfers take longer), a user can pull up the monitoring tool’s graphical interface, determine the time something changed and begin to troubleshoot why it changed – which is much easier than having to individually go through each part of the network to find problem areas.

Without a monitoring and diagnostic tool, a mining organisation has three options: It can have a human watching everything in real time around the clock; build its own ad-hoc monitoring tools; or use overly complicated open-source systems that either ping all the existing network equipment or are very chatty, which affects network performance.

In addition to the extra cost of having IT personnel build their own monitoring systems, there is a higher possibility of self-made errors – so it makes sense to invest in a dedicated tool that does the same thing.

What to look for

A monitoring and diagnostic tool will provide the maximum benefit to a mining operation if it has the following attributes:

Low bandwidth: Because of the multiple applications running simultaneously on a mine’s network, bandwidth is precious, and administration tools should not significantly add to or overwhelm it. A tool should be able provide real-time monitoring information while not impacting the network itself by adding too much traffic.

Passive: Mining organisations run high-bandwidth applications like surveillance video or autonomous trucks on the same network as their monitoring tools, creating a large amount of data constantly coming and going on the same network.

On wired networks, this is not an issue, but some wireless networks do not have the capability to send or receive information on a single radio in full duplex; data cannot be coming in while it also is going out. This means if a network is using an active monitoring system, in which the system has to individually poll every single radio on the network and receive separate confirmation from each one that it is working, important data streams – and operations – could be interrupted.

Customisable: No mining operation is exactly the same, meaning each organisation should be able to choose what information a monitoring and diagnostic tool looks for. For example, a monitoring and diagnostic tool can be used to measure the internal temperatures of each individual radio to ensure they are not overheating or freezing. This is important information for radios in extreme climates, but not for those in temperate climates.

Each individual operation should be able to choose what to monitor, so that the tool focuses on only what is most important. More importantly, the amounts and types of traffic on the network that are ‘normal’ will vary greatly between environments. One network’s ‘perfect’ is another’s ‘overloaded’ or ‘suspicious.’

Intuitive: While an organisation should not need a dedicated IT professional assigned solely to monitoring, monitoring tools still require IT and RF knowledge as well as training on the tool itself.

However, with the right tool, even a non-technically inclined employee can recognise when a network is having issues. For example, if something on an interface lights up red, an operator can easily see that there is an issue with the network, and can alert the trained IT experts, who can begin to troubleshoot.

Web based: IT departments may be stationed hundreds of kilometres from a mining operation. If a monitoring tool is web based, an IT engineer can view the interface over a secure web portal and begin troubleshooting problems without having to physically be in the same area as the tool, and without having specialised software installed locally.

Data inclusive: A monitoring tool must keep an eye on what’s happening in real time – no doubt about that – but it also should keep track of a network’s historical performance, allowing administrators to go back in time to figure out when a problem began occurring and what might have triggered it. This helps find and diagnose problems that may have been building up over time on the network, letting admins solve issues before they impact critical operations.

Comprehensive: A monitoring and diagnostic tool must provide reporting on all types of network data traffic and RF interference.

Mining operations strive for the highest productivity while also ensuring their employees stay safe on the job. A monitoring and diagnostic tool can achieve both goals by ensuring that all applications and assets stay up and running, or stop when they are told to, creating safer, more efficient operations