Researchers at Stanford University in the US have developed a new “vine-like robot” that can grow across long distances without moving its whole body. The team said it could prove useful in search and rescue operations, such as those conducted in mining, and also in medical applications. However, soft robots could hold much more potential in mining, helping to build and operate innovative operations of the future 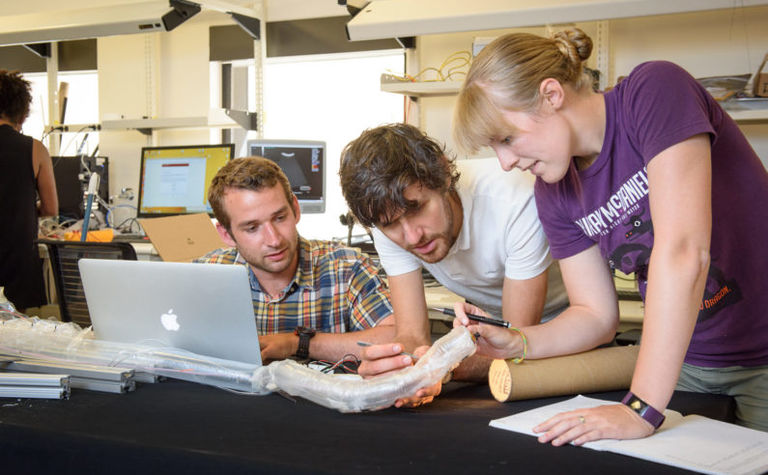 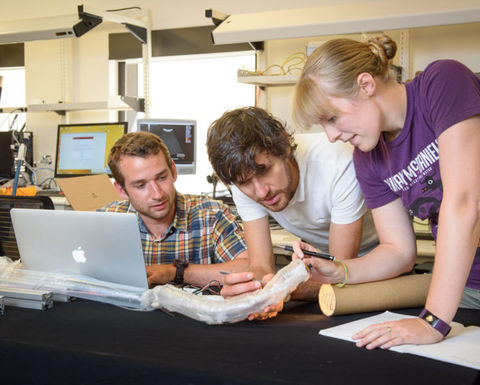 The ‘vinebot’ as it has been nicknamed, was detailed in a June 19, Science Robotics paper by a group of Stanford’s mechanical engineers. It was inspired by natural organisms that cover distance by growing, such as vines, fungi and nerve cells, and the team have run the proof of concept through a number of tests.

“Essentially, we’re trying to understand the fundamentals of this new approach to getting mobility or movement out of a mechanism,” explained Allison Okamura, professor of mechanical engineering and senior author of the paper. “It’s very, very different from the way that animals or people get around the world.”

To investigate what the robot can do, the group created prototypes that move through various obstacles, travel toward a designated goal, and grow into a free-standing structure. The robot comprises a tube of soft material folded inside itself (like an inside-out sock) that grows in one direction when the material at the front of the tube everts.

“The body lengthens as the material extends from the end but the rest of the body doesn’t move,” said Elliot Hawkes, a visiting assistant professor from the University of California, Santa Barbara and co-author of the paper. “The body can be stuck to the environment or jammed between rocks, but that doesn’t stop the robot because the tip can continue to progress as new material is added to the end.”

The group tested the benefits of this method for getting the robot from one place to another in several ways; it grew through an obstacle course, where it travelled over flypaper, sticky glue and nails and up an ice wall to deliver a sensor, which could potentially sense carbon dioxide produced by trapped survivors. The prototype completed the course despite being punctured by the nails - the area that was punctured didn’t continue to move and, as a result, self-sealed by staying on top of the nail.

In other tests, the robot lifted a 100kg crate, grew under a door gap that was 10% of its diameter and spiralled on itself to form a free-standing structure that then sent out a radio signal. The robot also manoeuvered through the space above a dropped ceiling, which showed how it was able to navigate unknown obstacles as a robot like this might have to do in a mine rescue situation. It also pulled a cable through its body while growing above the dropped ceiling, offering a new method for routing wires in tight spaces. “The applications we’re focusing on are those where the robot moves through a difficult environment, where the features are unpredictable and there are unknown spaces,” said Laura Blumenschein, a graduate student in the Okamura lab and co-author of the paper. “If you can put a robot in these environments and it’s unaffected by the obstacles while it’s moving, you don’t need to worry about it getting damaged or stuck as it explores.”

Some iterations of the robot included a control system that differentially inflated the body, which made the robot turn right or left. The researchers developed a software system that based direction decisions on images coming in from a camera at the tip of the robot.
There has been much talk of applications for robotics in mining recently. While robots such as the vinebot could have immediate applications in mine rescue and rehabilitation scenarios, in the long term, when coupled with advanced automation and artificial intelligence, they could be a key enabler in realising the ‘operations of the future’ as detailed by forward-thinking miners such as Barrick Gold, Rio Tinto and Vale.

A primary advantage of soft robots is that they are flexible and lightweight. This could prove especially useful in situations where a robot was moving in close quarters with an automated machine, or where it needs to follow a complicated path. For example, at an in-situ, biologically-controlled mining operation.

In a series of columns for Mining Magazine in 2014, expert business strategists George Hemingway and Jeff Loehr of the Stratalis Group, outlined a number of visions or ‘Futurecasts’ for mines of the future. The Living Mine in particular, outlines how robots such as the vinebot could help create more productive, efficient and environmentally sound mines.

And the Stratalis team are not alone. In her Digital Mining presentation at the IdeaCity 2017 event in Toronto earlier this year, Michelle Ash, chief innovation officer at Barrick Gold, explained how disruptive technologies and companies from outside of the mining industry could shape the operations of the future. Robotics and advances in sensors which allow depth perception were some of the technologies that she tipped as ‘ones to watch’ going forward.

“Could this be our miner of the future?” Ash tweeted upon reading the Stanford press release on the vinebot on July 25, “great work!”

The vinebot prototype was hand built and powered using pneumatics. However, in the future, the team would like to create a version that could be manufactured automatically, and also iterations which could grow using liquid. They said these could help deliver water to people trapped in tight spaces or to put out fires in closed environments. However, if these robots could be used to deliver fluids then why not modify them to sample fluids as well?

They are also exploring new, tougher materials, like rip-stop nylon and Kevlar, and plan to scale the robot up (and potentially down) to see how it performs; a 1.8mm diameter version has already been created which could grow without dragging along delicate structures.

Is a zero entry mine possible today?