The Institute for Advanced Mining Technologies at RWTH Aachen University in Germany is researching key technologies to lay the groundwork for the future of mine automation. Here, the team give an overview of two recent R&D projects: acoustic emission for material stream characterisation and differentiation, and ultra-wideband radio technology for the positioning of mobile mining equipment 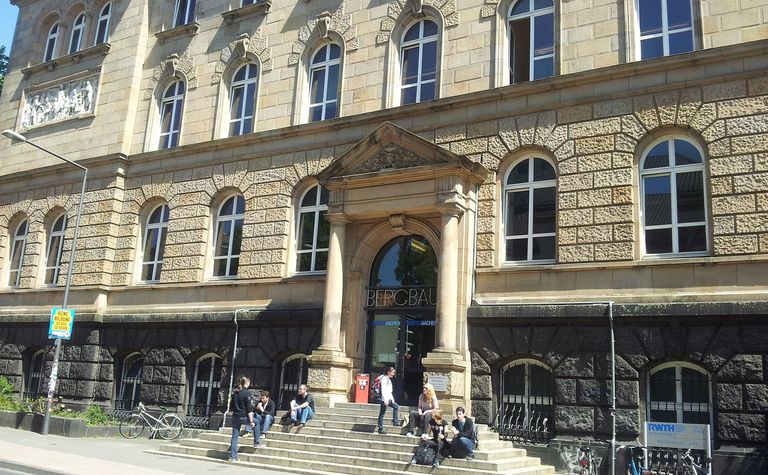 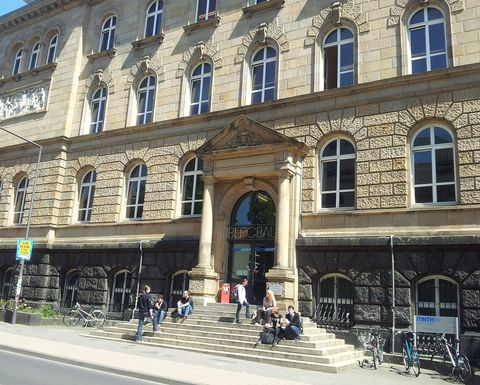 The mining school at Aachen University

In 2006, the German Federal Government fused a number of research and innovation programmes to form the Industrie 4.0 (Industry 4.0) initiative. When the programme was initiated, a lot of research was being undertaken in the fields of sensors and automation for the raw materials industry. The next logical step is to link machines and equipment to enable a horizontal and vertical exchange of information. In the end, raw data will be reduced into useful information.

Ideally, the operation of machines is supposed to be humanlike. This means, for instance, that if a machine breaks down, it is able to call for help or fix the problem autonomously. At the same time, the machine should also inform all process partners about that breakage so that they in turn can take appropriate actions. All of this will foster the goal of a fully automated mine.

At the Institute for Advanced Mining Technologies (AMT), the Industry 4.0 programme was coined “Bergbau 4.0” (Mining 4.0) to address the mining-specific context. This term embraces a new generation of autonomous mining equipment as well as the concept of mine-wide communication. It is aimed at creating an intelligent, self-optimised and more productive mine operation.

To support this initiative, the AMT held its first Mining 4.0 conference in 2015. Leading figures in mining, from industry professionals to researchers gathered to discuss the idea of Mining 4.0, and since the event was well received, the next conference will be hosted again in Aachen in November 2017.

Further, the Institute for Mineral Resources Machine Technology of RWTH Aachen University, as it was formerly known, switched names to the Institute for Advanced Mining Technologies, and with new financing, the institute appointed a new chair.

The AMT currently has three core areas of research, each focusing on a different aspect of mining. The first group is the Rock Cutting group which focuses on the basic principles of mechanical rock destruction. The aim is to implement new sensors and techniques into rock cutting procedures, and to gain new insight on these processes. Eventually, ‘activated’ cutting tools are to be devised, which will enable improved cutting performance. The ultimate goal is to transform rock destruction operations into continuous operations.

The second group is the Maintenance and Diagnosis group. This work pertains to the development of predictive maintenance, supervised and unsupervised machine learning and data mining. These goals can be achieved by using new sensors, such as acoustic emission (AE) analysis, or novel embedded systems that can be installed in places previously unreachable. The other approach is on the software side with the creation of intelligent condition analysers. These are algorithms capable of intelligently analysing and processing the copious amount of condition data present in machines.

In order to market the technologies developed by the AMT, a spin-off company called etersys GmbH was founded two years ago. Through this, market-ready technologies such as AE sensors, thermal imaging cameras, and UWB modules including respective algorithms are brought into the market, and the team also offers engineering and consulting services.

One of the AMT’s key projects aims to establish the feasibility of AE technology as a means of material stream characterisation. AE events are caused by physical processes such as plastic deformation, fatigue/crack propagation, friction, and external mechanical loads.

AMT’s research has so far focused on the fields of bearing analysis, material science, cutting technology and the approach of material stream characterisation in mining using AE. In these applications, the sudden release of energy – e.g. in the continuous transport of rock particles – is a result of impacts and friction, causing elastic surface waves. These waves spread out in the solid and can be measured as AE events. 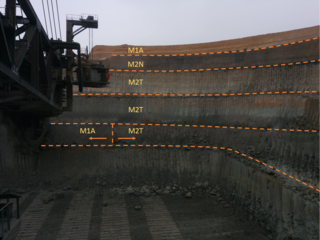 Following successfully bench tests, a field test using AE technology was run at a lignite open-cast mine in mid-2016. In this specific application, the challenge was to characterise different soil types in the overburden.

The raw data was gathered over a period of 17 working hours on different days. Utilising knowledge from previous test bench trials, the data analysis outlined characteristic attributes for each soil type. The prediction accuracy for each type was between 65% and 80%, based on the analysis of the AE data.

A second field test was also run at a limestone quarry in April-May 2017. The challenge in this application case was the detection of flint stones in the limestone material stream. In this case, four measuring sections at two different conveyor transfer points were used, and the data was gathered over a period of four days. Analysis of the AE data is currently underway with the results expected by the end of July, and the team has already patented the underlying method.

In the future, additional data from the plants and from different sensors (infrared measurement, vibration measurement, offline laboratory analysis) will be merged with the AE data. This should improve analysis significance and the sensor fusion lead to an improved confidence level.

In order to reach the goal of a fully automated mine, it is necessary to have location information for all mobile equipment. According to a spokesman for a German hard-coal mine, sometimes up to 40% of the mobile equipment is unaccounted for and the position thereof is unknown. To change this, it is vital to develop underground positioning systems.

In addition, the market for such systems is on the rise. The report Global Indoor Location Market Outlook 2019 estimates an increase in market value from US$597 million in 2014 to US$3961.8 million by 2019. Prominent examples for IPS technologies today include WLAN-based IPS, ZigBee and infrared systems. However, not all of these systems are suitable for an underground operation, especially considering the harsh environmental conditions in the mines.

At the AMT, investigations have identified UWB radio technology as a system that can be used in this context. UWB technology possesses unique features the other systems cannot offer, including simple hardware, almost non-existent interference when employed with other radio systems, and, most importantly, relative immunity towards multipath effects.

Multipath effects describe the physical event of radio waves being reflected from a surface (especially those made of rock, steel, or concrete) during a transmission in indoor environments. This eventually leads to several overlapping signals which distort or even destroy communication between transmitter and receiver.

UWB systems on the other hand use very short radio pulses. These cover a relatively broad-frequency spectrum in a very short time domain. The exact specification, according to the Federal Communication Commission, is that UWB pulses cover at least 500MHz or occupy more than 20% of the arithmetic centre frequency in a frequency range between 3.1 and 10.6GHz. The nature of these short pulses makes it possible to clearly distinguish individual signals from multipath signals. 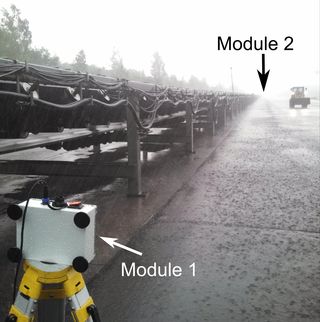 For a proper localisation based on UWB technology, several UWB radio modules need to be employed. At least one stationary module, the ‘anchor’, and one mobile module, the ‘tag’, need to be used for a one-dimensional distance measurement. For a multi-dimensional position measurement, at least one more anchor than the dimensions desired for the position estimation is required. This means that for a 3-D spatial position estimation, at least four anchors must be used. Often, however, the number of anchors can be reduced by implementation of a plausibility test or sensor fusion.

In order to estimate the position, a lateration algorithm can be applied. For this, the distance between an anchor and the tag needs to be known. This distance can be measured through simple time-of-flight measurement.

Different laboratory tests and tests in the field were conducted with the UWB system to prove its capability and suitability. The environmental impact on the UWB system was investigated at a lignite open-pit operation in the eastern part of Germany. Tests were performed outdoors and in an indoor application under ‘mine-like’ conditions.

In both applications, the UWB system dealt with these conditions and reliably provided robust and precise distance data. The raw measurement data alone exhibited a precision of less than 10cm.

In order to enhance the precision of these systems, sensor fusion is currently being investigated at the AMT. This involves using a combination of data from several sensors to enhance localisation results. With this method, certain flaws in one sensor system can be compensated for by the strength of another sensor system. Additionally, this approach may reduce the number of anchors required for UWB based localisation systems and reduce overall investment costs.

Currently, the implementation of a fusion algorithm based on the Sequential Monte Carlo method (SMC) is being undertaken in the Real-Time Mining research project. Here, the task is to establish an underground localisation system on the basis of UWB through means of sensor fusion with inertial navigation systems and laser scanners. The key result will be a demonstrator system that shows UWB is ready for underground operation.

Research on the Real-Time Mining project is further intensified in the Sustainable Intelligent Mining System (SIMS) project, also funded by the EU, which started in May 2017. In this project, the idea is to demonstrate the results for an underground localisation system based on UWB and inertial navigation of the Real-Time Mining project on a larger scale for a section of an underground mine.

Another current research project focuses on the positioning of the boom of a shotcrete vehicle to semi-automate the vehicle. In this application, it is necessary to follow the boom’s movement and to position the boom on exact past positions.

Automated and online material flow characterisation is a key element on the way to a continuous mining operation. Additionally, the underground localisation system based on UWB and sensor fusion will lay the foundation for the automation of mobile mining equipment.

In the future, the AMT’s R&D activities will be in the scope of online measurement systems. For AE material characterisation, parameter optimisation and sensor fusion are expected to boost the performance and quality of information gathered. Through smart combinations of sensors, the advantages of technologies can be exploited to produce maximum efficiency and operational performance in individual applications.

EPSA and Immersive Technologies are partnering to improving workforce development

Is AI the solution to mining's unique barriers?