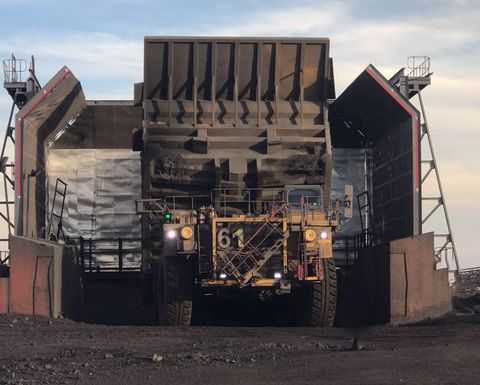 The I-CAT Dust Division said the system's release is in response to an estimate that about 75% of coal operations in South Africa contend with spontaneous combustion (sponcom) of dust when load-haul-dump trucks (LHD) tip their material loads.

It was designed, the company added, after the client approached its staff via the University of Pretoria to design a customised dust suppression system that would prevent such an occurrence when burning coal is loaded to a grizzly screen from the LHD; this is a key transfer point before it is carried by conveyor to a mine's crushing circuit.

To advance its idea, the companies consulted with an engineer to design the structure while the university performed the needed 3-D modelling for the structure of the tip and airflow simulations.

"All of this input allowed the I-CAT Dust Division to come up with a bespoke enclosed solution," divisional manager Morné van Wyk said. "A major factor to be taken into consideration was that the coal-dust particles were not only ultra-fine, but are hydrophobic as well, meaning water does not cling to them readily, thereby mitigating any conventional dust-suppression approach."

He pointed out that, while a traditional tipping area cannot be entirely enclosed - for the very reason it was working to mitigate the potential for - an air-flow simulation was used to determine the structure's design to cover that tipping area effectively and safely. The end result had a U-shaped top and was still open, though it was still able to effectively contain the dust, and measured 16m by 16m, and 11m high.

"The magnitude of the air flow analysis required is indicated by the fact that up to 250t LHDs tip coal from a five-storey height into the crusher below," Wyk said.

From there, the company proposed a two-stage system, an initial positioning sensor for the approach of the LHD and a second being a water curtain right around the bottom side of the tipper itself, with a misting system on a gantry at the top end of the tipper.

The final result product, which has 48 total nozzles, is entirely automated with full SCADA and PLC control. If the tipped coal temperature is higher than 80°C, a secondary cooling system was designed to be activated. That additional system prevents conveyor belts from delaminating in the intense heat.

The system uses grade 316 stainless steel in its main construction material because of the coal application; coal, when exposed to water, produces sulphuric acid. I-CAT noted, however, that it has the benefit of being environmentally friendly with reduced water consumption. Using only process wastewater, the system stores the supply in a 280,000 litre dam before entering the pre- and final filtration phases of prep.

The client mine's system has a 25-year lifespan, and I-CAT said it needed just nine days over a regular shutdown period this July to install it following the nine-month design phase.

Some elements of the system were pre-fabricated and transported prior to start; the company said it used four 60t cranes and one 750t crane to lift and position three panel sections as well as the final gantry left to the structure tip.

I-CAT's Dust Division has a 12-month maintenance contract at the operation.