The partners of ¡VAMOS! (Viable Alternative Mine Operating System) held a demonstration day to put its technology on display at the Magcobar flooded mine pit in Silvermines, Ireland 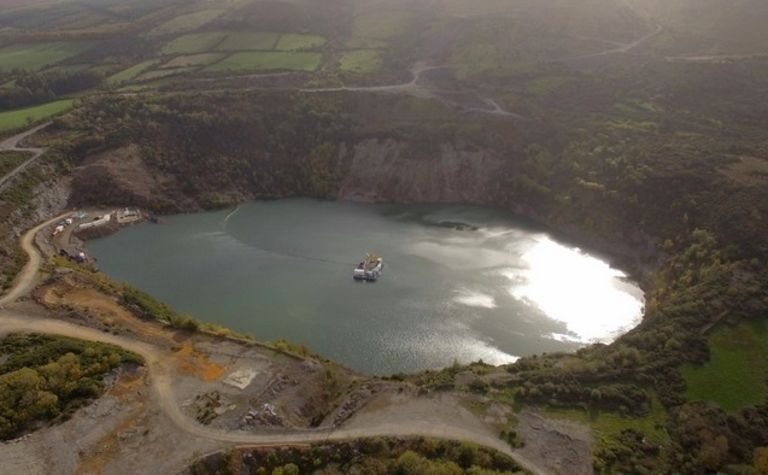 About 85 attended an October 24 demonstration of the ¡VAMOS! system

About 85 visitors were in attendance to see the October 24 demonstration of the technology, which has been funded by the European Union Horizon 2020 research and innovation programme. ¡VAMOS! is made up of 16 partners from nine EU countries.

"[The system] seeks to address the EU's need for (critical) raw materials, by making possible the extraction of mineral deposits from inland water-bearing areas," the group said, describing the system as a remotely operated mining vehicle launched from a waterborne carriage.

The demonstration day's briefing included a discussion about plans for the brownfield site, a former open-cast operation closed since 1993: the development and construction of a 360MW, zero-emission hydro power station.

Attendees first saw EVA, an automated underwater vehicle that aids in precise positioning, navigation and situational awareness of the vehicle and its surrounding environment. They then travelled by tender boat across a lake to the launch and recovery vessel; there the vehicle was deployed and winched up from the bottom of the mine, where it had been working at depths of about 57m.

The visitor group additionally saw the control cabin and data centre, the hub of the ¡VAMOS! project during the trials, and got to experience first-hand the virtual reality human-machine interface.

Presentations on regional and site geology and historical mining heritage were also offered during the day, and organisers requested feedback from participants.

"The ¡VAMOS! team has successfully demonstrated their ability to use the prototype mining system in very hard rock," the group said, noting that state-of-the-art electronics and visualisation were used to control operations.

The ¡VAMOS! trials will conclude early November. An on-site team with SMD, Damen, Sandvik, InescTEC, Fugro, Zentrum für Telematik, Fugro and BMT Group will then be on-site to demobilise. It will evaluate the test results in the coming months, then report to the EU.

A New Paradigm of Work

The World Economic Forum and Accenture collaborated on a Mining and Metals Industry Action Group.