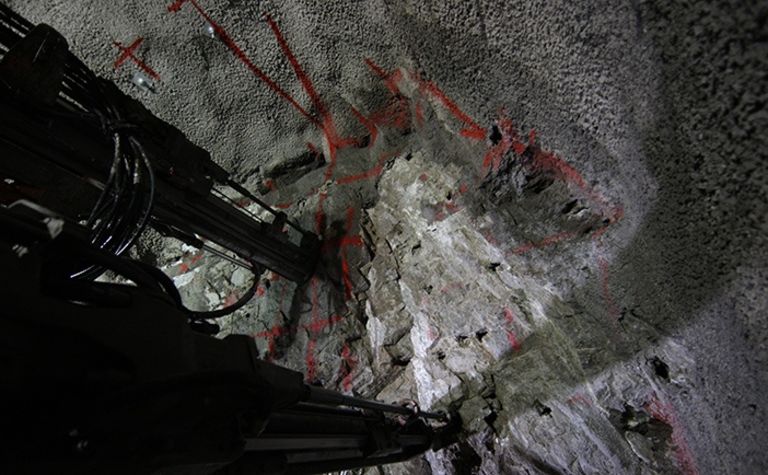 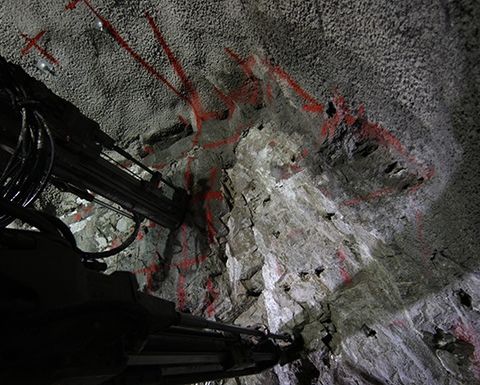 The orebody being prepared for blasting at Oyu Tolgoi, Mongolia. Image: Rio Tinto

The technology, which was first announced in 2013, and which MM has covered several times since, is designed to increase the safety and profitability of underground mining operations. It does this through measuring the movement of fragmented rock under gravity and managing its flow through controlled extraction.

“In large-scale underground operations, even a 10% reduction in waste can represent tens of millions of dollars in value,” he told Rio Tinto’s Mines to Markets publication.

The technology used in Cave Tracker has been in development for nearly 10 years. The system uses a series of trackers and detectors placed in and around the orebody to track the rock three-dimensionally inside the cave as it moves in real time. The system can transmit signals through two hundred metres of rock and will continue working remotely for many years, even as it is impacted by the rock deep underground.

While most signals won’t travel through rock, slight changes in magnetic fields can be detected with sensitive equipment. The trackers, invented by CRC Mining CEO Paul Lever and his team, use battery-powered spinning magnets that send signals through rock. As the trackers need to work underground for many years, the team had to optimise the battery life by making the magnets spin as efficiently as possible.

A key challenge was to create a device small enough to be placed in drill holes, yet powerful enough to capture and transmit a huge amount of data. It also needed to withstand the immense force of rock, so the team brought in a NASA engineer to assist in designing a tough outer shell to protect the trackers deep underground.

“While we have previously been able to monitor the area surrounding the cave closely, very little has been known about the movement of the rock inside the cave itself,” said Van As.

“We have been able to place markers in drill holes within the cave and measure where and when they come out on the extraction level, but we have not been able to measure what happens in between. This lack of real-time information has commonly led to part of the orebody being left behind or diluted.”

He added: “With Cave Tracker, we can now see into the cave and monitor the mass flow of caved rock. That means we can make better decisions to manage the flow of ore and waste, improving our profitability.”

Rio Tinto said that in addition to delivering significant productivity improvements, the technology also has the potential to make cave mining safer.

In some cases, large voids can develop within the cave, and if a large enough air gap collapses, air can be pushed through the mine with incredible force. The Cave Tracker system, in conjunction with other cave monitoring systems, can be used to detect the formation of air gaps and manage them before they pose a safety threat.

Following a proof of concept led by Rio Tinto and CRC Mining at Northparkes mine in 2007, a full-scale trial was initiated at the Argyle underground diamond mine in Australia at the end of 2014.

Once testing is successfully completed, Cave Tracker will be deployed at Rio Tinto's Oyu Tolgoi underground copper mine in Mongolia.

You can see a video of the Cave Tracker technology in action here.