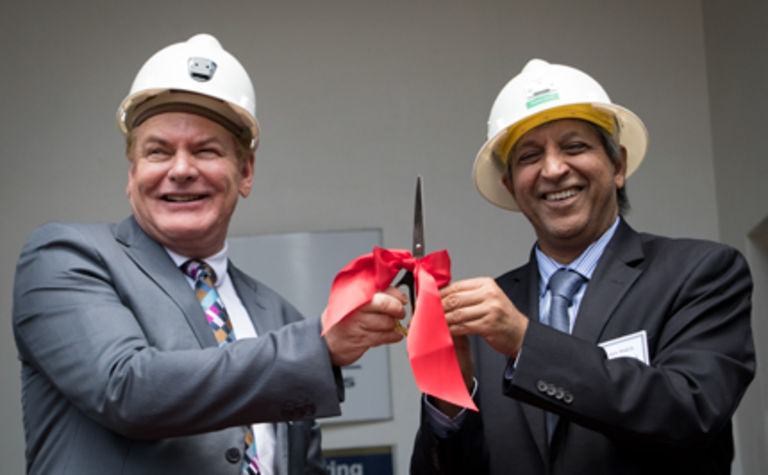 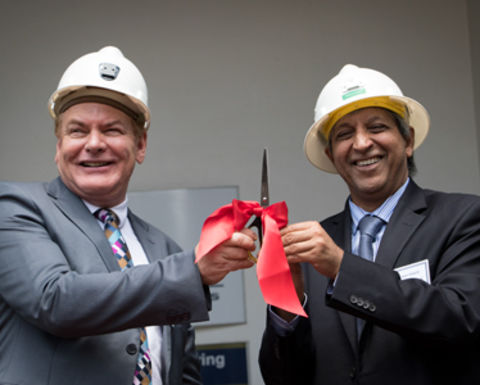 PRESS RELEASE: The University of Witwatersrand (Wits University) in South Africa has strengthened its partnership with Gold Fields with a R6 million (US$435,860) sponsorship to improve knowledge in the fields of mechanised mining and rock engineering.

The funding follows a long-standing partnership of over 10 years, in which Gold Fields sponsored the Wits School of Mining Engineering with R18 million.

The cheque was officially handed over to Professor Adam Habib, vice-chancellor and principal of Wits, by Gold Fields CEO Nick Holland, who also re-opened the newly-renamed Gold Fields Laboratories at the Wits School of Mining Engineering.

Habib commented: “Both Gold Fields and Wits University want to collaborate in developing young professionals with the knowledge and skills required to support mechanised, deep level gold mining. Through this, we can undoubtedly assist the mining industry in general and play our part in bringing South Deep to full production.”

Operated by Gold Fields, South Deep is one of the country’s largest and deepest underground mechanised gold mines. The skills and expertise required to bring the mine, with an expected life of over 70 years, to full production are not in abundant supply in South Africa.

Holland said that even though the mining industry in South Africa is going through a ‘bumpy road’, there is still a future in mining, and that mining indirectly supports about 30 million people in South Africa.

“Our challenge is that when all of a sudden there is a mining boom, that we don’t have the skills and resources in place,’ he explained. “Wits has for decades provided the skills needed to power South Africa’s mining industry. This latest sponsorship will ensure that they are in a position to do so for many years to come.”

A number of projects have already been identified for funding by Gold Fields during the three-year period. They are:

Habib said that Wits would like to partner with all the mining houses in the country, to assist in ‘rethinking’ the economy in South Africa.

“Let’s go back to what we said in the 1930s and 1940s. [At the time] Wits partnered with the mining industry to pioneer a new different way of mining that lasted at least 40 years. Let us start again. Let’s start a new 15-year partnership that will stand for the next 40 years,” he said.

He added that not only does the mining industry need the skill sets to mechanise in the future, but that increased mechanisation would lead to a change in social structure of existing miners who may need to be retrained and reskilled. This might need other academic support, such as sociologists, lawyers and other fields of the humanities.

“The historic challenge of our time is how to rethink a common humanity. We will pioneer ways in how to rethink mining; rethink humanity and rethink what it means to be both African and human,” he concluded.

ABB in digital mine partnership at Granny Smith

Collaboration is a step towards potentially automating some of the mine's operations.