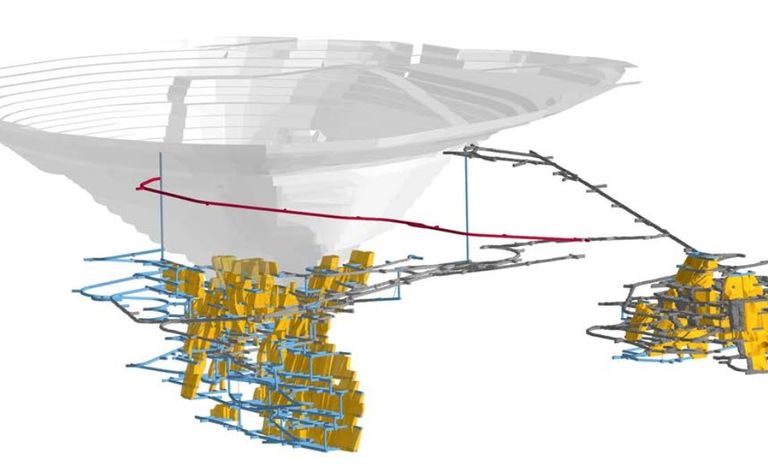 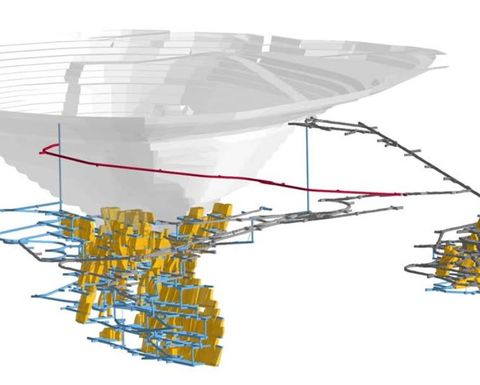 The new development decline at Prominent Hill pictured in red

Prominent Hill is a copper-gold mining operation in northern South Australia that is solely owned by OZ Minerals. It comprises the Malu open pit mine, the Ankata underground mine and the Malu underground mine.

Development will begin immediately to expand Prominent Hill’s underground operation by building a second access decline linking existing underground development with the open pit. This will lift the peak capacity of the underground mine by around 30% to approximately 3.5-4Mt/y.

The second decline will have a length of approximately 1,400m and will cost A$12 million (US$8.7 million). Byrnecut has been selected as the contractor, and it is scheduled to be completed in the December 2017 quarter.

Andrew Cole, managing director and CEO at OZ Minerals, said: “Prominent Hill’s underground mine is proving itself to be an excellent asset and we want to invest in its future. By building a second decline, we will not only boost the underground’s capacity, we will significantly increase the efficiency of the whole operation and drive down future unit costs.”

He added: “Prominent Hill has amongst the lowest C1 costs in world and, even on its own, the underground mine is within the bottom quartile of C1 cost producers. Once the second decline is complete in the next two years, truck efficiencies in the underground will increase and we will see other major benefits in terms of ventilation and contingency planning.”

This additional capacity will allow OZ to bring forward underground production during the years 2018-2022. This is in line with the company’s strategy of extracting maximum value from the operating asset. With this increased output, the company expects to see reduced unit costs which will allow it to further reduce cut-off grades. In addition to building the second decline, OZ will spend approximately A$4 million (US$2.9 million) in 2016 on underground diamond drilling to target resource to reserve conversion.