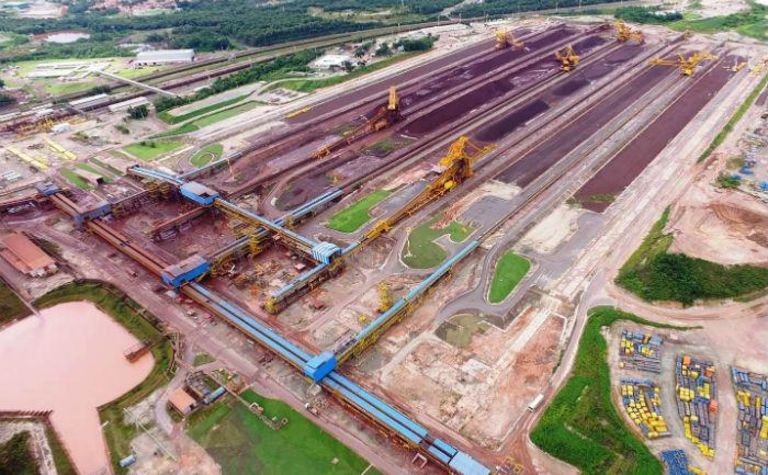 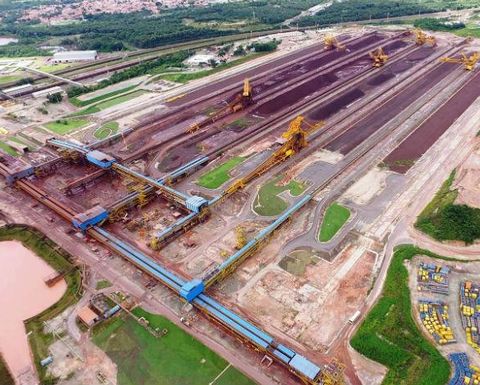 S11D is one of the largest projects in Vale's history

Some key milestones for Carajás S11D Iron, one of the largest projects in Vale's history, were reached at the end of July.

The mine, located in Canaã dos Carajás in the southeast Pará region of Brazil, has now been powered up. Along the 101km railway branch line that links the mine to the Carajás railway, all the ties and rails have been installed, permitting the movement of construction locomotives to finalise the last details. In turn, at Ponta da Madeira maritime terminal in São Luís, Maranhão, to where S11D's iron ore will be taken by the Carajás railway, the assisted operation phase of the port's onshore expansion work has begun.

The onshore part of the S11D Logistics project consists of building port infrastructure on land to receive and store the ore from the mine in southeast Pará. This includes two rotary car dumpers, a set of conveyor belts, a stacker and two reclaimers. The stacker is one of four installed at the port, and according to Vale they are the world's largest. These machines are 45m tall, equivalent to a seven-floor building, and they are each able to move 16,000t/h of ore. Working together, the reclaimers and stackers have the function of arranging cargo in the stockyard and moving the products to be loaded onto ships.

Evalton Sena, operational readiness team leader at Vale, said: “This next stage will allow the operation and maintenance teams, together with the project teams, to work in harmony to ensure flawless, full operations, until we reach 100% reliability of the onshore equipment.”

The S11D project, which includes a mine, plant, and railway and port logistics, is now 79% executed, and it will start up in the second half of this year. The mine and plant are 90% complete, while the logistics part (including the railway branch line) is at the 70% mark. Considering just the branch line, the work is 92% complete. Total investment amounts to US$14.4 billion - US$6.5 billion used to implement the mine and plant, and US$7.9 billion spent on constructing the branch line, double-tracking the Carajás railway, and expanding Ponta da Madeira maritime terminal.

The first large machine will be positioned at the mine in the coming days: a mobile crusher that is 54m long, 15m tall and 17m wide. This is the first of a group of seven crushers that will be part of the mine's ‘truckless’ system. This technology, which Vale stated has never before been used in iron-ore mining, will make it possible to replace off-highway trucks in operations, thereby cutting diesel consumption by 70% and greenhouse gas emissions by 50%.

The truckless system is made up of 29 large machines. Seven hydraulic and electric excavators will collect the ore at the pit faces and deposit it into seven mobile crushers. Inside this equipment, the blocks of ore will be broken up into smaller parts and then dropped onto conveyor belts, which will take it to the processing plants. Another 15 machines are part of the crushing system, tasked with transporting the material from one pit face to another as the activity progresses.

The S11D mine has been energised thanks to the completion of the main 230kV substation, which will supply all the power needed to commission and operate the unit's equipment. The substation will also run the whole communication interface between the plant and mine, and online monitoring from the project's operations centre will be possible. In all, there are more than 10km of power transmission lines in the mine's system.

In addition to the main substation, another 69 secondary substations are part of the electrical system. The construction model adopted brought about environmental gains. The substations are made off-site and delivered ready to be interconnected and powered up, making it possible to eliminate brick structures and so drastically reducing the amount of construction waste. The substations also feature dry-type transformers, eliminating the need to use mineral oil, containment basins and water-oil separators, thereby reducing the risks of leakages into the environment.

The testwork has focused on using XRT, optical and laser systems