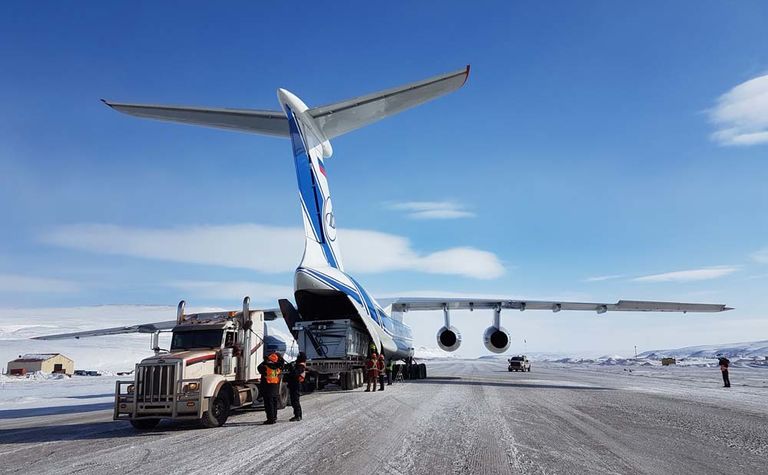 In 2016, Baffinland achieved 3.2 million tonnes of production and transportation of iron ore from the mine to the port site 100km away. Much of the equipment already on the island arrived by sealift during the summer, but with ice having shut down shipping lanes, no further deliveries would be possible until late July or early August. Recognising the need to increase the size of its truck and trailer fleet, Baffinland turned to Volga-Dnepr for its expertise in moving heavy and outsize cargo, as well as the ability of its IL-76TD-90VD freighters to operate on Arctic runways.

In addition to increasing its fleet capacity, Baffinland needed the extra equipment because the extreme winter weather conditions and harsh ground environment were causing its existing equipment to need regular maintenance, thus reducing its availability.

However, the trucks were too tall to fit inside the IL-76TD-90VD cargo cabin, so Volga-Dnepr’s engineers set about finding a solution, working closely with the Baffinland team. With weather conditions of up to -50° on site, plus the need for the new equipment to enter service quickly, it was essential to minimise the level of dismantling of the trucks in order to eliminate a lengthy reassembly process on arrival.

Volga-Dnepr’s solution was to put smaller tyres on the tractor units for transportation, reducing their height sufficiently to fit inside the IL-76TD-90VD.

Volga-Dnepr’s team also worked with Ilyushin Design Bureau to address the issue of the short 6,500ft (1,980m) runway at Mary River and found a solution to use the least amount of fuel in order to safeguard the limited fuel supplies available on the island. Using the aircraft’s extension ramp equipment and on-board cranes also ensured the programme was self-sufficient in terms of loading and unloading.

With all of the planning completed, including gaining the necessary approvals from Transport Canada, Volga-Dnepr commenced a four-week programme of 20 flights at the start of April. This included positioning extra crew in Canada to ensure the timeliness of the flight operations for the four-hour rotation from North Bay to Mary River and back again.

Clair Gunn, account manager at Volga-Dnepr, who worked on the project with the airline’s specialists in London Stansted and Ulanovsk, said: “Weather systems can come in very quickly in Mary Island, so you have to be prepared. Having extra crew availability meant we were able to meet our delivery schedule even though we had two days of blizzards and white-out conditions during the flying programme. We are proud to have delivered a solution that will make a significant contribution to Baffinland achieving their iron-ore production quota this year.”

The 15-tonnes Volvo FMX vehicle will be trialled at the Pajala iron ore mine.