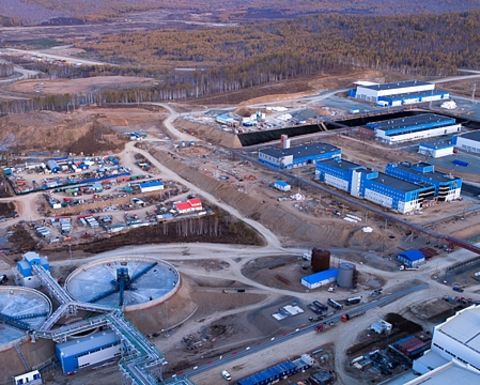 The Gazimuro-Zavodsky district mine in the country’s Trans-Bailkal Territory will mine gold, iron and copper ores to produce concentrates of gold, copper and magnetite. The site’s total ore reserves are estimated at 343 million tonnes, giving the complex a 30-year expected mine life.

The hot commissioning, which will last for the next several months, is a long time coming for Nornickel. Bystrinsky is Russia’s largest greenfield metals and mining project, and the operator has been constructing the plant since 2013 with a total investment of more than Rb90 billion (US$1.52 billion).

Prime production levels are projected to kick off by the middle of next year, with design capacity of 10mt/y being reached by the close of 2019.

Once at capacity, Bystrinsky will be Nornickel’s third major production asset alongside operations at the Taimyr and Kola peninsulas.

“We are very proud that it took us just four years to build from scratch a plant of a caliber that commensurates of projects completed during the Soviet industrialisation era,” president Vladimir Potanin said.

“For us, this is not just yet another new asset, but also an opportunity to put to work the most advanced technologies in production, social policy, environment and human capital management.”

Miner partners with Russian Academy of Sciences to examine mining, production and logistics