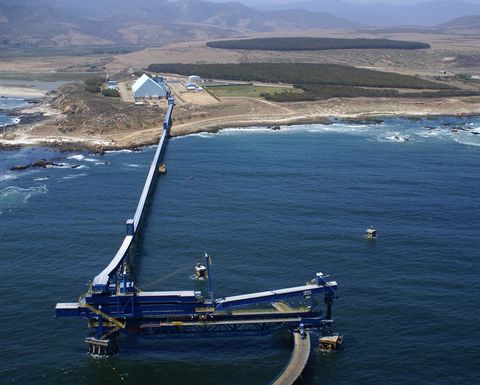 Antofagasta's desalination plant was hit by a tidal wave.

THe platform belonged to Antofagasta Minerals. No workers were affected by the damage.

The collapse of the jackup rig occurred on Monday, with Chile's environmental regulator announcing the following day that it has started an investigation into the matter.  Bad weather has so far prevented the recovery of the fallen structure.

Environmental concerns come from a generator with fuel and an oil tank that was involved in the collapse, with fears that it could contaminate the nearby coastline and fishing waters.

No evidence of environmental damage has been observed so far, and a specialist company certified by Chile's maritime authority is already onsite to monitor and clean up.

The damaged infrastructure was part of the INCO complementary infrastructure project underway at Antofagasta's Los Pelambres copper-gold-silver-molybdenum mine.

In response to water restrictions that have constrained production at the site, the company was building a desalination plant on the coast, which would pump fresh water to the mine in the mountains behind.

The collapsed jackup was supporting the maritime works to place water intake and brine discharge pipes.

The 400 litre/second reverse osmosis plant will feed the other aspect of the INCO project: new grinding and floatation lines to increase capacity at the Piuquenes processing plant to the maximum of 210,000 tonnes per day allowed by environmental regulations.

The plant was expected to be commissioned by the fourth quarter of this year, with local communities having recently expressed displeasure at construction delays that Antofagasta has blamed on the pandemic.

Locals also claim that the company has not lived up to commitments regarding contributions to social services and infrastructure in the region.