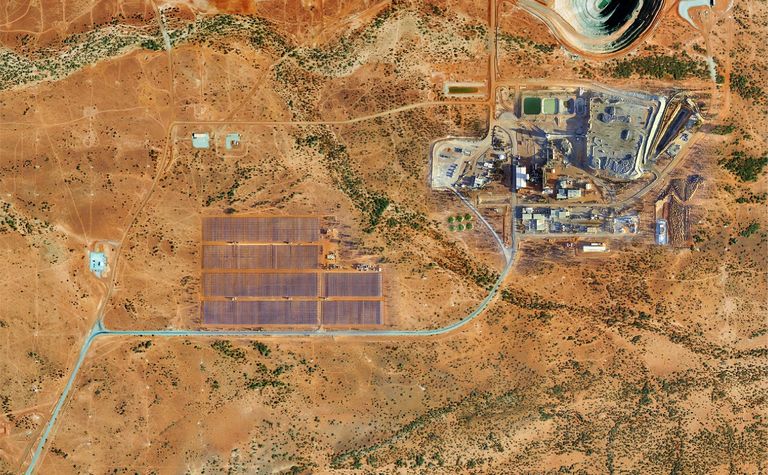 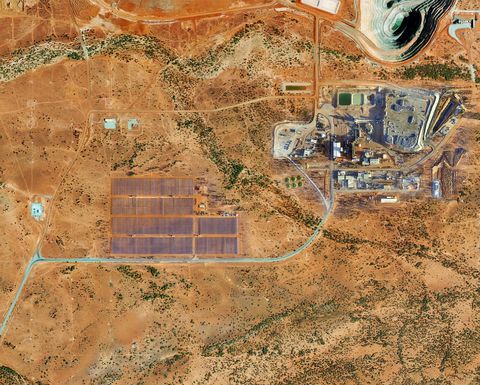 An aerial view of Sandfire Resources' DeGrussa mine site

The facility is currently generating approximately 7MW of power, which is in line with seasonal expectations. Solar generating output will ramp up during the summer months to achieve the full 10MW functional capacity.

The solar array covers a total area of over 20ha at the site, which is located immediately adjacent to the DeGrussa underground mine and processing plant.

Commissioning of the A$40 million (US$29.6 million) project commenced in March 2016 following installation of the last of the 34,080 solar photovoltaic (PV) panels. The project required electrical infrastructure to be installed including inverters to change the electric current from DC to AC, transformers and other electrical accessories and control systems.

Testing confirms that the plant can perform in accordance with contractual specifications and validates the power purchase agreements covering the facility. Continual testing will be completed in June to ensure it can maintain stable operations at 100% generation capacity.

The DeGrussa solar project is the largest integrated off-grid solar and battery storage facility in Australia and reportedly, in the world. The project comprises 34,080 solar PV panels with a single-axis tracking system mounted on 4,700 steel posts. This enables the panels to track the sun during the day, improving the plant’s overall performance.

The panels are connected via an extensive network of low-voltage, high-voltage and communication cables to a 6MW lithium-ion battery storage facility and the existing 19MW diesel-fired power station at DeGrussa.

The DeGrussa solar power project is owned by the French renewable energy firm Neoen, with juwi Renewable Energy responsible for the project development, EPC and O&M. The plant was constructed by national surveying and infrastructure construction company OTOC, with project financing provided by the Clean Energy Finance Corporation (CEFC) and recoupable grant funding support of A$20.9 million (US$15.5 million) from the Australian Renewable Energy Agency (ARENA).

The solar facility has been integrated with the diesel-fired power station – owned and operated by Pacific Energy subsidiary KPS – continuing to provide base-load power to the DeGrussa mine with sufficient minimum load to ensure it can respond quickly to meet the power requirements of the process plant and underground mine.

Karl Simich, managing director at Sandfire Resources, said that the completion and successful commissioning of the DeGrussa solar power project was a significant achievement, providing a strong demonstration of the exciting opportunities emerging within the mining industry for the adoption of renewable energy technologies at remote mine sites. 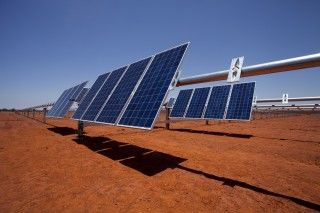 He added: “This is the largest integrated off-grid solar and battery storage facility in Australia and draws together a number of technologies which are widely expected to have a transformational impact on the global economy over the next decade. These include solar power combined with a state-of-the-art lithium-ion battery storage facility, which has been used for the first time in a remote location at the DeGrussa copper-gold mine.

“This project has already attracted a significant amount of interest from within the mining industry in Australia with Sandfire receiving inquiries from several of our peers interested in adopting this technology at their mine sites. I would not be surprised to see more facilities like this built over the next few years, as the benefits and potential of solar power become increasingly recognised across the resource sector.

“The DeGrussa solar project is expected to reduce our annual diesel consumption and cut our carbon emissions by more than 12,000t of CO2 annually – a reduction of more than 15% based on our reported emissions for the 2016 financial year.

“The successful completion and delivery of this project is a great achievement by the consortium that was formed to finance, develop and implement this state-of-the-art project, and I would like to congratulate them on achieving this significant milestone.”