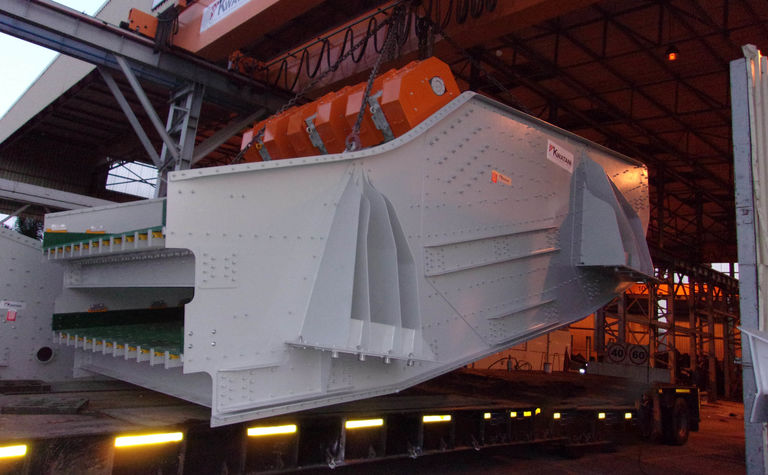 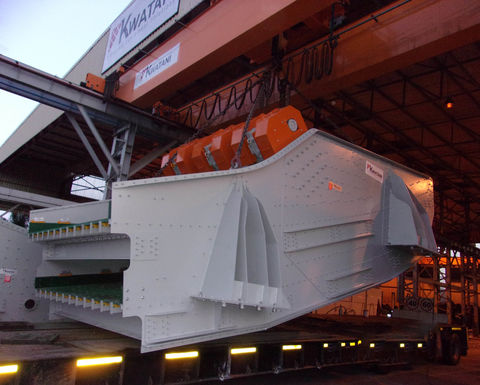 A double deck screen leaving Kwatani for the end user

Kwatani's custom-engineered products are now in some of the world's largest mines, and many customers have standardised on their screens to ensure lowest cost of ownership and high performance, according to general manager sales and service Jan Schoepflin.

Schoepflin added: "While our base and core market are in Africa, the global demand for Kwatani products has grown rapidly. A leading diamond mining company in Russia is very pleased with Kwatani screens at their newest operation and specified Kwatani for future projects."

In another order from a large diamond operation, this time in South Africa, the customer also replaced the last of their competitor screens with a Kwatani unit. Schoepflin said this is because the company has enjoyed years without unplanned stoppages by using Kwatani screens, added: "It has shown that our equipment and service are just as effective in unusually harsh climatic conditions."

At a local brownfield diamond expansion project, the company's multi-slope banana screens were matched to the available plant footprint, raising throughput from 250t/h to 500t/h and later breaking the mine's tonnage record.

While screening in heavy minerals is Kwatani's stronghold, the company has moved extensively into coal, supplying the South Africa's leading coal producer with no fewer than 45 items of large screening equipment, including out-sized 4.3m-wide units.

Other recent coal-related orders included run-of-mine screens for a medium-sized coal mine in Mpumalanga. Again, competitor equipment was replaced by custom-designed screens with optimised deck angles which significantly increased tonnage. The positive results achieved with the Kwatani equipment also led to additional orders for the mine's expansion.

Kwatani was also reportedly contracted to supply all the screens for the world's largest zinc mine. At Africa's largest iron ore mine, the company has recently completed two projects, renewing existing equipment with up-to-date solutions and replacing 24 items of competitor equipment.

The platinum sector is also keeping Kwatani busy, not just in South Africa but over the border in Zimbabwe too. A recent turnkey solution focused on the platinum by-product chromite, where the company supplied a complete solution which included feeder, dryer and screen to treat chromite of 45μm size at 15t/h.

"Our screens have been a popular choice for modular gold plants going to West Africa as well as Central and South America," Schoepflin said. "We also supplied to two of Africa's largest copper producers in Zambia, to a tanzanite producer in Tanzania, and repeat orders to a manganese mine in Ghana."