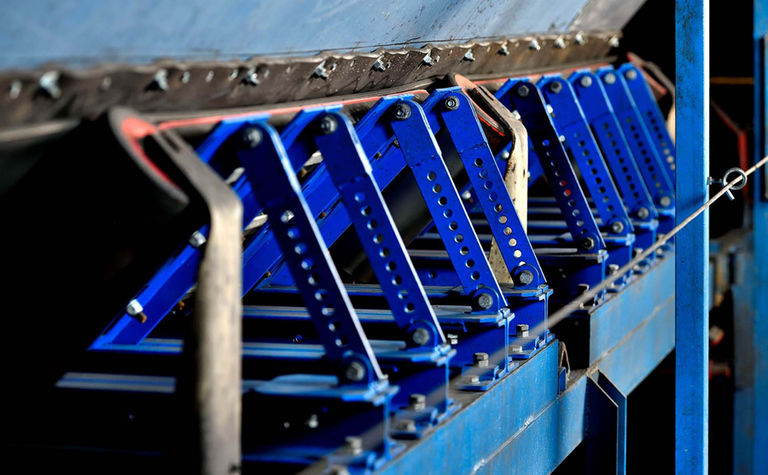 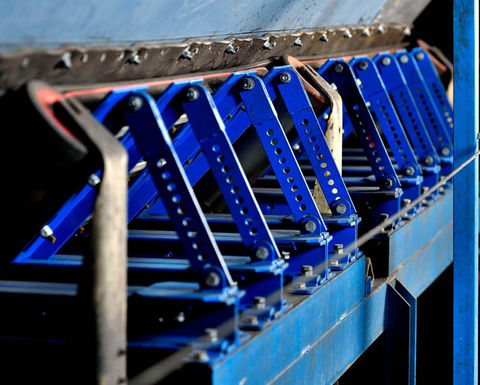 Located at Gällivare, Sweden, LKAB's Malmberget iron ore mine was facing high maintenance times on its conveyor systems due to wear and tear from material impact on the belt. After installing Metso's impact cradles and belt cleaners, the plant was able to extend belt life as well as significantly cut down on roller change-outs, reduce material spillage and improve safety.

Metso's processing equipment is installed on the line that produces MAF*, a finely crushed iron ore that is later melted into sinter cakes as an end product. LKAB has installed Metso Conveyor Solutions loading stations to simplify maintenance work and increase safety.

The discussion around the issues with the conveying system started when LKAB's production team reported to Metso that there was a lot of material spillage underneath and at the side of the conveyor belt near the loading zone. The frequent flushing and cleaning of the area was time-consuming in terms of maintenance. This was not ideal, considering that the humidity in mineral processing has to be kept stable in order to avoid downstream equipment issues.

The problems were occurring because the mineral flow was uneven in the loading zone, causing the conveyor belt to be unstable. With the concentrate from two drum filters coming onto the belt in pulses and with considerable force, the belt was bouncing up and down, causing material spillage. Another disadvantage from the uneven flow in the loading zone was the constant wear and frequent replacement of the conveyor rollers. 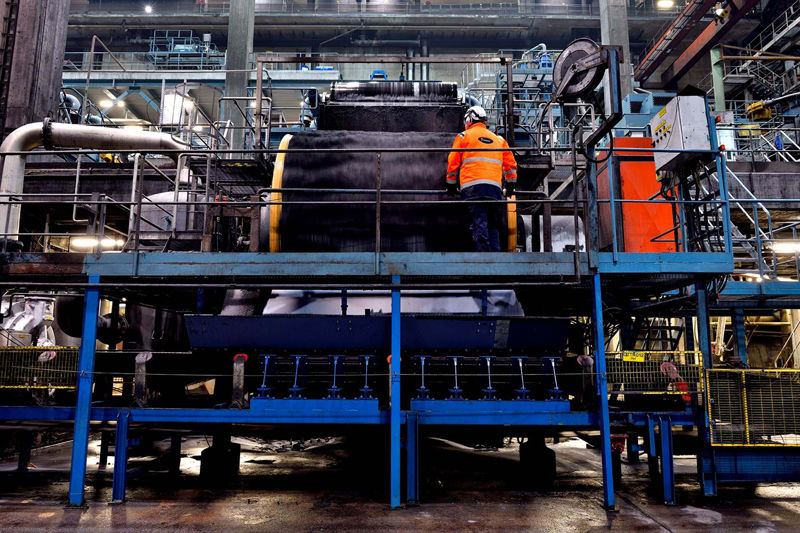 Impact cradles and bars bring improvements on many levels

To resolve the issues, Metso proposed and installed Trellex Impact Cradles and Bars at the loading area to better support and protect the conveyor.

"Installing the impact cradle has brought a longer service life to the conveyor belt, and some rollers have been removed where the cradle is now installed. The conveyor belt works evenly now and without any problems," stated Sven-Erik Fredriksson from LKAB's Preparation and Maintenance team.

He also says, "We do not have to replace the rollers on the rest of the conveyor as often. The problem with spillage is now a thing of the past, so this is a clear improvement and we are very satisfied with the result. LKAB is very meticulous when it comes to safety at the workplace; since we do not have to replace rollers here, which used to be done manually in multiple stages, the safety has also increased".

Alexander Forsberg, Sales Support for conveyors at Metso, added: "Another obvious advantage, which also saves time, is that the impact cradle is adjustable and the sides are hinged, making it possible to replace the impact bars in a smooth and safe manner."

The solution comprised reconstruction of the conveyor, a new impact cradle in the loading zone, the assembly of a ABC70 cleaner, as well as a secondary fine cleaner ABC-THMS PU.  Though the additions were minimal, the need for cleaning and maintenance was cut considerably and the safety for service engineers was increased. 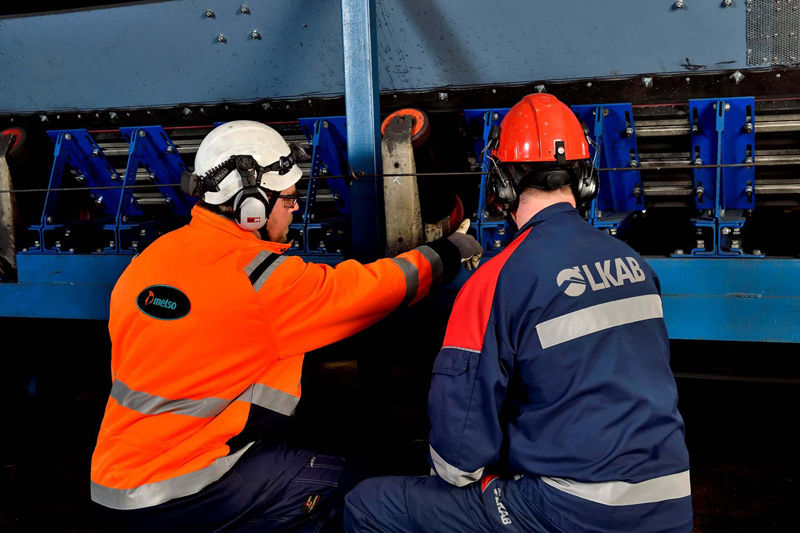 A partnership for problem solving

The cooperation between Luossavaara-Kiirunavaara AB (LKAB) and Metso goes back decades, not only in Kiruna but in Gällivare as well. This collaboration can be seen in the mineral processing plant in Malmberget. There is open and straightforward dialogue between LKAB's different service and maintenance teams and Metso's staff regarding orders, service levels, reconstruction projects and spare parts availability.

Metso and LKAB hold regular coordination meetings, resulting in more of a partnership when it comes to looking for operational improvement opportunities. This partnership has translated into a Life Cycle Service agreement for mill lining solutions at the plant; Metso's service teams also handle the maintenance of the mine conveyor systems, including accessories and screening solutions.

LKAB's problem with impact material spillage on their conveyors was first discussed at one of the coordination meetings between the companies. After examining the challenges of high loading impact on the conveyors, Metso presented a turnkey solution, comprised of impact cradles with impact bars as well structural improvements to the conveyor's frame.

Used in conjunction with Trellex Impact Bars, Trellex Impact Cradles provide long-lasting support and protection to conveyors. Calculations were made using the TIC (Trellex Impact Calculator) tool to obtain the right dimensions for the conveyor belt. LKAB decided to move ahead and implement the proposed solution. 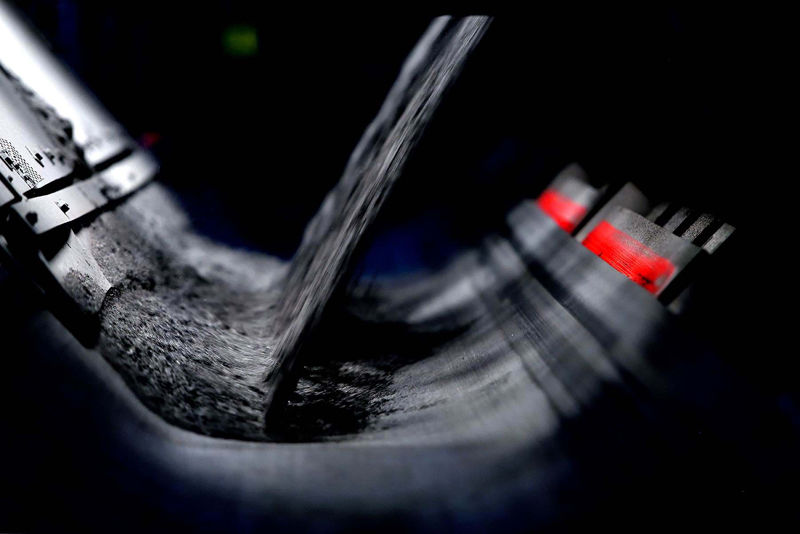 To install the new impact cradle, Metso's service team also flagged that the frame of the conveyor belt had to be reinforced, as it was in need of repair. Large parts of it had to be replaced and this reconstruction was later carried out by Metso's staff during a 2-week planned shutdown.

"We at LKAB appreciate that Metso's service guys point out issues and give input about what needs to be done. We can't be everywhere after all," continued Fredriksson. "Some of the things that had to be repaired were at the back side - we couldn't have discovered them earlier."

Additional impact cradles on the way

Due to the good results from the assembly, delivery and installation of the first impact cradles and bars, LKAB has ordered additional cradles from Metso for different lines in the mineral processing plant.

*MAF
Finely crushed iron ore, which is melted into cakes (sinter cakes) It is then used in iron manufacturing around the world. Because of its high iron content, it is in high demand on the global market. MAF is used in metallurgy, engineering, the food industry and medicine. Applications range from pressed details in shock absorbers in cars and gearboxes in Formula 1 racers to iron tablets in medicine for people suffering from anemia.

Company has a long-term strategy to achieve net-zero carbon emissions by 2045.

The human element is crucial for digitalisation success