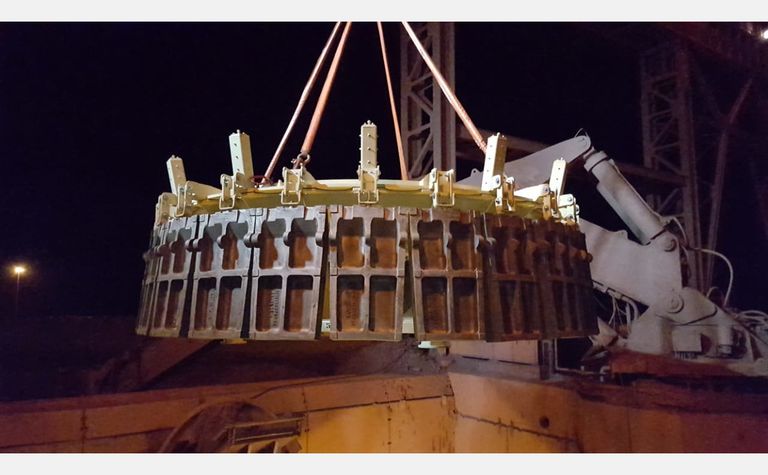 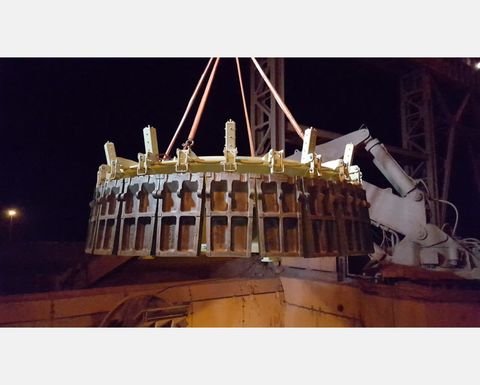 Located in South Africa near Postmasburg in the Northern Cape Province, Kolomela is one of Anglo American's Kumba Iron Ore operations.

Kolomela produces over 13 million tonnes per annum of iron ore, and is one of Anglo American's largest operations in South Africa. Anglo American is implementing a broad and progressive programme of change that is designed to be game-changing for the industry.  The role of innovation and digitalization is key to delivering sustainable and safe production.

The longer it takes to replace the wear parts inside the chamber of a primary gyratory crusher during a maintenance shutdown, the less uptime and thus, less production. By reducing the number of lifts, the replacement can be done much faster and safer.

Kolomela approached Metso's expert team to help them reduce the average downtime the operation encounters when replacing concave liners of their SG60-110 crusher.

"When the mine approached us with a request to help them speed up the process of changing the concave liners on the primary gyratory on site, they asked us to replicate the methodology that we once used at one of Anglo American's major copper mines in South America, Los Bronces, which included the use of special tooling such as carousels and removal trays to remove the liners. Following the review of the Los Bronces system, we identified that we used different parts and installation methods not suitable for Kolomela's operating model," said Metso's Regional and Technical Support Manager, Crusher Wears, Andrew Stones.

Metso's team looked at an alternative innovative solution not only for different fixing arrangement on the carousels, but they also changed the parts. Instead of the mine having six rows of concaves to install, Metso reduced the rows to four. This minimized the installation time. In addition to this, the team supplied Kolomela with removal trays - which enable a faster removal of the worn segments - as well as with modified attachments to help lift and install the carousels.

Downtime cut in half and significantly greater safety

Metso's solution has halved the downtime required for a concave liner change.

Reduced downtime was not the only value add that was provided, the mine also reduced by 95% the injury exposure rate. Unlike the previous system that the mine used which required people to be in the crusher when lowering each concave, Metso's innovative carousel system provided optimized operating labor and safer installations. It is not dependent on human interaction.

"At Anglo American, we are unconditional about the safety of our colleagues. When the Metso team highlighted the safety element that the carousel methodology brings, it was indeed an added benefit and advantage. We understood, at that point, that Metso will also prioritize the safety and well-being of all individuals. There is no price on safety" said Kolomela's Section Manager Engineering, Pieter Malan.

"Previously, the Kolomela mine used 288 lifts to remove and install each concave liner; a process that has been identified as potentially hazardous work for the liner replacement team. Our new concave carousel concept reduced the lifts to 16, substantially improving both uptime and safety. The carousel allowed an entire tier of new concave segments to be lifted in place at once" added Metso's Vice President Mining, Africa and Middle East, Qasim Abrahams.

Metso's relationship with Kolomela was established in 2010, when the global industrial company provided the mine with the installation and commissioning of its crushers and the supply of OEM spare and wear parts. Other Metso equipment on site include two Nordberg® MP800™ and one Nordberg® MP1000™ cone crushers.

While this was a known and tested concept, this particular project required a completely new carousel and removal tray design and also brand-new wear parts which included new concave liner design, patterns and trial castings. Metso's team of experts completed this project in six months, from customer order until delivery.

Find out more about chamber optimization and concave carousels.