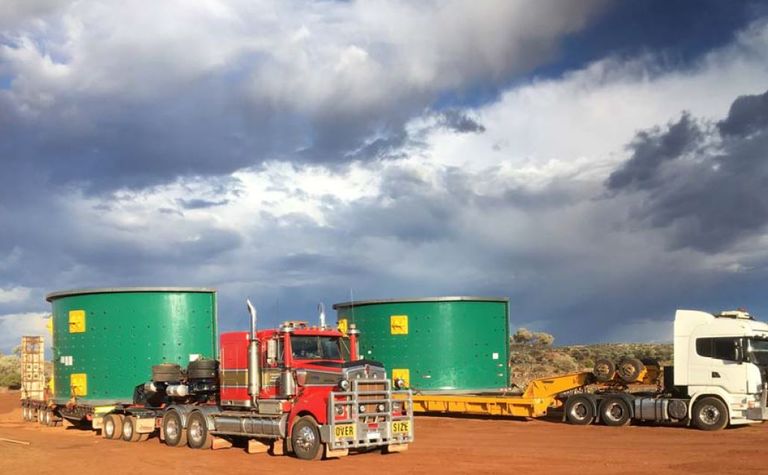 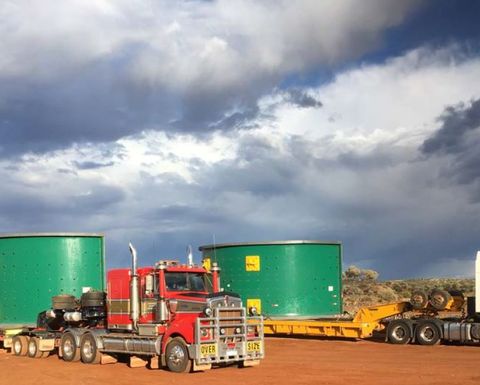 Arrival of the two halves of the 8.5m diameter, 3.5m long SAG mill to the Mt Morgans site

PRESS RELEASE: The semi-autogenous grinding (SAG) mill has been delivered to site and the ball mill will arrive on site next week.

This strong progress means Mt Morgans remains on time and on budget to achieve first gold production in March 2018 – less than six months from now.

The larger ball mill, which is 5.5m in diameter and 8.9m long, requires escorted transport to site from Fremantle Port and will arrive next week.

Rohan Williams, executive chairman of Dacian Gold, said: “The arrival of these large‐scale capital items for the plant marks another key milestone for the development team, with the plant now over 50% complete and the overall project on time and on budget – and firmly on track for first gold production less than six months from now.”

He added: “A lot of the structural steel has already been erected and recent progress at treatment plant site remains impressive. At the same time, underground mining at Beresford is now in full swing and mining at our second underground mine, Allanson, is about to start – to be followed by the start of open pit mining at Jupiter, later this year.

“As we move closer to first gold production, our exploration programs are also continuing to gather momentum – with a particular focus on Cameron Well, where we have two rigs currently operating.

“Dacian Gold is now just months away from becoming a substantial new Australian gold producer. Our rapid progress is due to the exceptional skills and work ethic of our employees, consultants and contractors, and I would like to take this opportunity to thank GR Engineering for their ongoing performance in the EPC of the Mt Morgans treatment plant.”