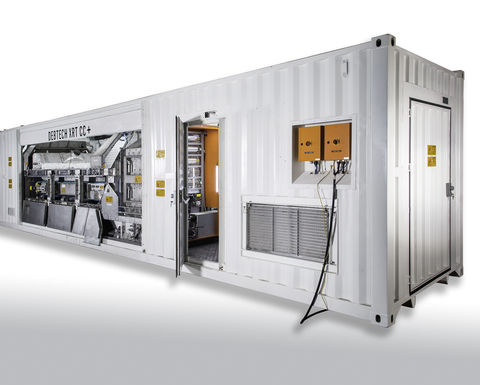 The XRT Coarse Concentrator Plus (CC+)

According to head of DebTech Gordon Taylor, the XRT Coarse Concentrator Plus (CC+) units were specially developed for the Botswana mine to treat run-of-mine at combined throughputs of up to 500t per hour, while allowing for the recovery of large diamonds with negligible extra material.

Taylor said that the recent developments in XRT technology make the identification of diamonds much more accurate, changing the economics of finding larger diamonds. The XRT CC+ units at Jwaneng are based on the original XRT Coarse Concentrator model developed by DebTech and operate using imaging systems and sorting algorithms proven at several De Beers Group operations.

The CC+ machines are assembled, transported and operated in 12m shipping containers, allowing them to be fully tested in workshop conditions and quickly commissioned on site. Each unit is self-contained with its own power conditioning, compressed air generation, closed-circuit water cooling and machine control room.

They are operated through a menu-driven control interface, which allows real-time reporting and is fitted to provide remote diagnostics. Material enters the unit via an inlet chute and is conveyed between the X-ray source and the X-ray camera; images captured by the camera are analysed by software algorithms, and a pneumatic ejection system diverts the objects identified as diamonds.

The ‘dual energy' feature on the XRT sorting system enhances its ability to analyse materials of differing thickness. Its imaging capabilities not only identify and eject diamonds, but are also capable of generating online carat estimates and stone count values.

"This considerably reduces downstream infrastructure with a further benefit of the technology the reduction in the consumables, power and water required," he added.

The system classifies ore as product or waste, using a variety of sensors