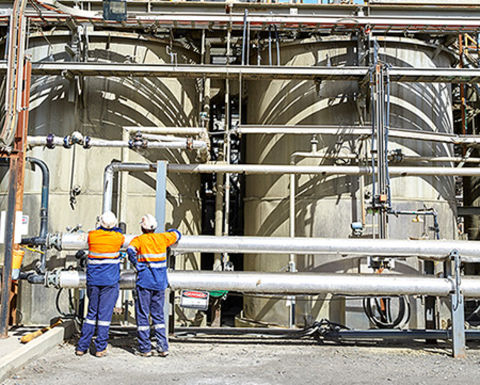 The Swirl Flow system was designed by CSIRO, together with its partners at Queensland Alumina, to enhance agitation in mixing tanks within mineral processing plants. The agitation process is improved by mixing liquids and suspended solids to create a tornado-like vortex in the tank; this, in turn, is meant to improve the agitator's reliability by reducing maintenance and shutdowns.

Kirkland's Fosterville underground gold mine was looking for a solution to ensure the safety of workers maintaining its slurry mixing tanks.

CSIRO explained that, due to their configuration, conventional agitators tend to create dead zones in which there is little movement in the mixture, resulting in the precipitation and build-up of unwanted scale.

Fosterville was managing this scale build-up through frequent tank wall cleaning and draining.

"However, the possibility of pieces of scale breaking off and falling when the tank is drained, or when the agitator is removed for maintenance, creates a health and safety risk for employees cleaning and maintaining the tanks," CSIRO added.

The Swirl Flow technology, which could minimise problems with dead zones and sedimentation, was identified as a potential solution for these safety issues and has since been installed at the operation.

"For us, the driving benefit of Swirl Flow was the health and safety aspect," Fosterville gold mine's technical process superintendent, Susan Mills, said.

"The safety of our people is paramount and the benefit of reducing the hazards of falling scale during maintenance made the decision simple."

"Currently, companies tend to buy a complete processing system and not look at the individual components within that system to see if there are better alternatives," CSIRO lead scientist Jie Wu said.

Prior to the installation at Fosterville Gold Mine, CSIRO had mainly supplied the technology to the alumina industry.

CSIRO said it is now looking to expand the applications of Swirl Flow and is interested in working with both producers and mining equipment technology and services supplier companies to help resolve operational mixing problems.

"We started in the alumina industry and are now making inroads with applications and plant trials in gold processing, uranium leaching and other minerals sectors," said Wu.