An automated system for monitoring mining vehicles, developed by VIST Group (part of Zyfra Group), has been deployed in the quarries of EVRAZ’s Kachkanarsky mining and ore processing plant in Russia 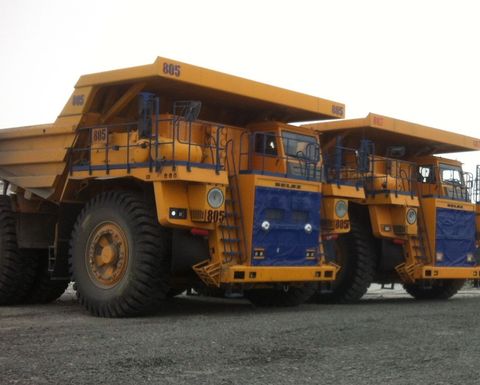 35 Belaz trucks have been equipped with sensors and navigation antennae

Alexander Bondarenko, business unit director at VIST Group, commented: "Thanks to the joint efforts of specialists from KGOK and VIST Group, a sophisticated and up-to-date system for managing mining vehicles has been deployed at the EVRAZ plant.

"Following Phase 2 of project implementation, which will cover rail transportation and quality control of ore arriving at the plant from the shipping sheds, the system will be the most sophisticated in the Russian ore mining sector."

The system tracks and displays real-time information on the locations and operating conditions of dump trucks, bulldozers, excavators, automatic loaders and mobile canteens.

Using the Wi-Fi network installed in four quarries, all data on the vehicles' speed, mileage, fuel levels and rock loads, as well as the locations of the mobile canteens, is transmitted in real time to the computer terminals of the plant's dispatchers and chief specialists. The data is also seen by the excavator operators and dump truck drivers on smart displays in their cabs.

Thanks to a modular geological model of the ore deposit integrated into the system, it is possible to analyse the quality of the iron ore and control the movements of the dump trucks and excavators. In the event of an unforeseen stoppage, the system redirects the Belaz truck to be loaded by another excavator.

Denis Novozehnov, vice president of EVRAZ and head of the company's Urals division, noted: "The switch to an automated monitoring system has helped us to reduce ore losses and ensure more reliable quality. We've also been able to improve the productivity of the quarry dump trucks."

Work on the investment project began in November 2017. So far, 19 communication towers have been installed around all the quarries, while 30 excavators and 35 Belaz trucks have been equipped with sensors and navigation antennae, as well as smart displays in the driver's cabs.