The BHP Mitsubishi Alliance (BMA) is introducing autonomous vehicles at its Goonyella Riverside coal mine in Queensland, Australia 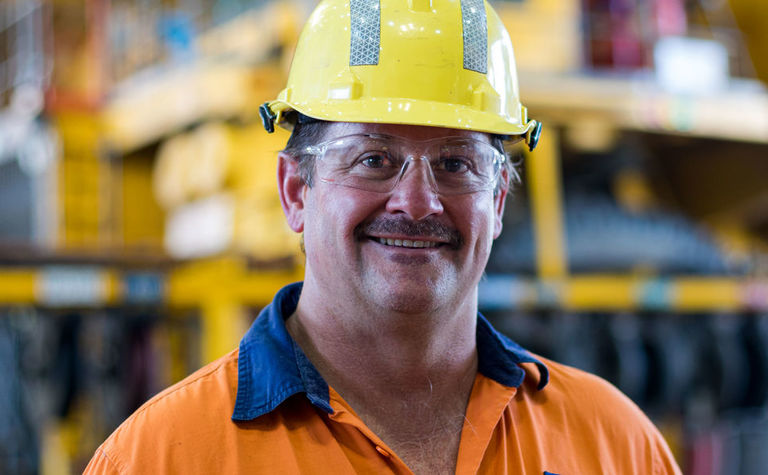 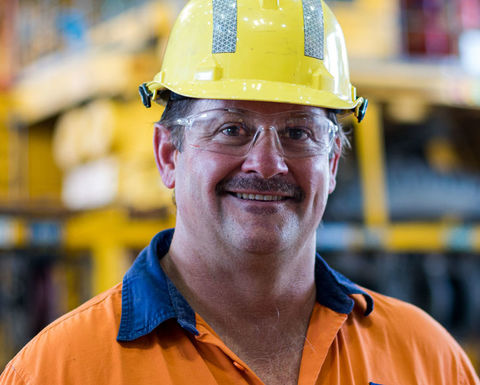 Sean Milful, general manager at BMA's Goonyella Riverside coal mine, in front of one of the new autonomous trucks

Stephen Smyth, CFMEU Mining and Energy Queensland president, said BHP had announced a deployment of 86 autonomous trucks without informing the workforce or conducting a trial.

"BHP can choose to put the interests of the workforce and local community at the centre of their automation strategy or simply chase profits by replacing good local jobs with robots," he said.

"By failing to engage in any consultation or provide information to the workforce, they appear to be chasing profits at the expense of workers.

"At the end of the day if this industry is just creating dust and traffic without generating good local employment and economic activity, it will lose its social license to operate."

James Palmer, BMA asset president, said haul trucks at Goonyella Riverside mine would be fitted with autonomous vehicle technology, allowing the completion of an extensive study and engagement with the workforce, community and all levels of government.

"Autonomous haulage will help us improve safety and productivity performance, and it is our people who will be at the centre of making this change a success," he said.

"While the first autonomous vehicles will not operate at the site until 2020, and full roll-out will take around two years, we want to give people in our workforce and the community as much notice as possible of this change."

According to BMA, there will be no forced employee redundancies at Goonyella Riverside as a result of this decision with respect to autonomous haulage.

In fact, Palmer said with the recent recruitment of permanent positions in BHP Operations Services and the creation of roles through autonomous haulage, overall permanent job numbers across BMA operations would increase.

He said BMA's long-term commitment to the region was underpinned by a responsibility to provide training opportunities for local workers to ensure they had access to the skills and capabilities to succeed in the future of mining.

"This announcement represents a multi-generational investment by BMA in the future of the Bowen Basin," he said.

The introduction of autonomous haulage at Goonyella Riverside will involve the staged conversion to an autonomous fleet of up to 86 Komatsu trucks over the next two years.

It will build on the mine's strong production record by increasing truck hours and delivering more consistent cycle times.

As BMA's first site to implement autonomous haulage, Palmer said BMA had been talking to its workforce and the local community about the potential for increased automation of mining operations for several months leading up to today's announcement.

"We understand that automation represents a significant change," he said. "It also offers a unique opportunity for people to gain new, highly valued skills."

To help prepare for Goonyella Riverside's autonomous future, it is estimated more than 40,000 hours of training will be delivered, ranging from general awareness to extensive training for those operating equipment, interacting with the autonomous haul trucks or taking on new roles.

Smyth said the union was calling on BHP to commit to no forced redundancies for workers affected by automation and to offer extra jobs and apprenticeships in other parts of the business to offset any changes in job numbers.

The union also wants remote operations centres to be located on or near affected mines, rather than in capital cities thousands of kilometres away.

Smyth wants the Queensland government to insist any automation project be accompanied by an economic impact statement that includes impact on local jobs and economic activity.

The union's suggestion is that where automation programmes do lead to job losses in local and regional jobs, additional royalties be collected and provided to the local communities.

It also wants diesel rebates withdrawn where vehicles are not operated by workers.

"We understand that mining companies will push to maximise their profits at every opportunity," Smyth said. "That's why we need governments to step up and make sure that these companies earn their social license to operate. That includes understanding how communities will be affected by automation and intervening to make sure regional Queenslanders don't pay the price."