Brazil’s Vale is trialling the use of colossal rotor sails on a VLOC (Very Large Ore Carrier), and plans to install the carbon-emission cutting sail technology on almost half its new fleet should the pilot succeed. 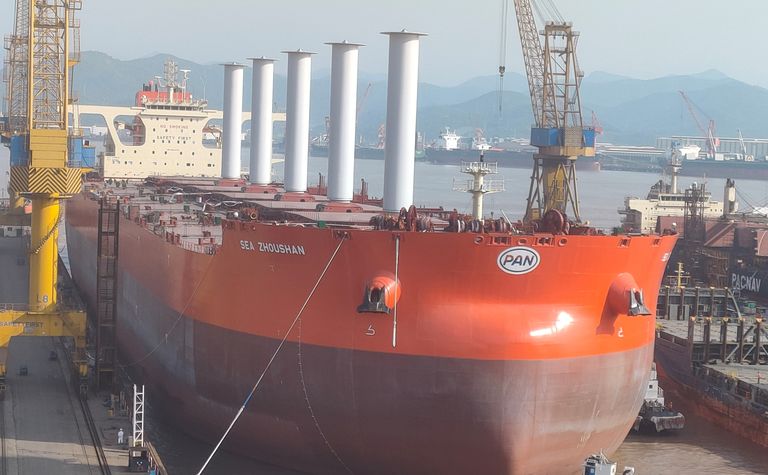 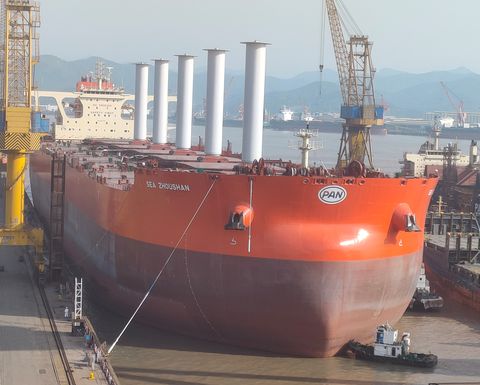 The Guaibamax's maiden voyage with the sails will take place in the next few days. It is leaving China, where the sails were fitted by the company Shanghai Ship and Design Research Institute (SDARI), for Brazil.

There, it will receive the first shipment of iron ore at one of Vale's ports in the country. On average, the trip takes 40 days.

The sails will lead to an 8% efficiency gain and lower emissions by 3,400 tons of CO2, said the company.

The rotor sails are cylindrical rotors, each as tall as a seven-story building. During operation, they rotate at different speeds creating a pressure difference in order to move the ship forward, in a phenomenon known as the Magnus effect.

"Our naval engineering team has been studying the use of wind propulsion technology for our business since 2016," said Vale's shipping technical manager, Rodrigo Bermelho.

"With the Ecoshipping program we have developed several cooperation partnerships with ITV (Vale Institute of Technology), universities and laboratories in Brazil and Europe.  For this project, the purpose was to evaluate the best operating conditions of rotor sails in our contracted fleet, and also validate the gains of this technology in terms of reducing fuel consumption and CO2 emissions."

The ship chosen was already contracted to be built, and the time between detailed design to manufacture and installation of the equipment was just one year.

As well as laboratory and engineering tests on the equipment, the technicians studied the incidence of winds on the Brazil-China route.

"We realized that we have a competitive advantage over our competitors: the Brazil-Asia route has more wind on average than that of Australia-Asia," Bermelho adds. According to Vale's manager, 3D models of all the company's ports were made to analyze how the ship would be moored. The sails recline to allow the operation of the ship loader. "There is no interference during loading," he says.

Next month, the company will receive the first Guaibamax ship with Air Lubrication installed. The technology creates a carpet of air bubbles at the bottom of the ship, allowing a reduction in water friction with the hull. Conservative expectations point to a fuel reduction of around 5 to 8%, with the potential to reduce annual emissions in Vale's iron ore shipping by 4.4%.

The company's Ecoshipping programme is also developing a multi-fuel tank capable of storing and consuming, in the future, not only liquefied natural gas (LNG), but also methanol and ammonia.