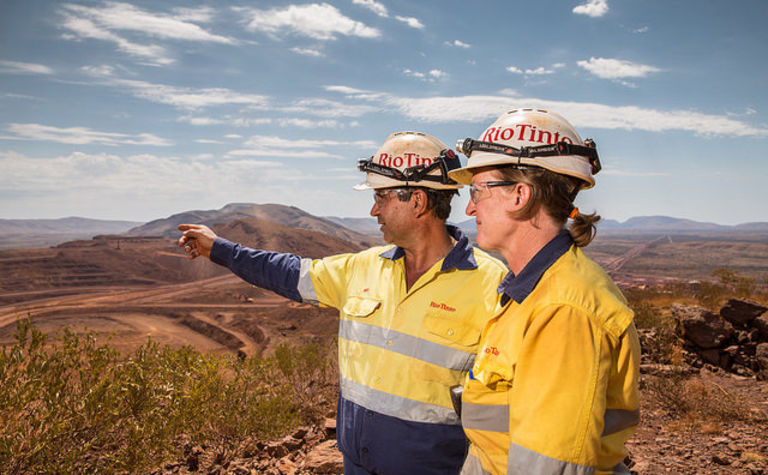 Employees at the Western Turner Syncline, another of Rio's WA operations

Rio Tinto chief executive J-S Jacques said “Silvergrass is a great example of our value-over-volume approach in action as the mine will deliver the high-quality, low-cost ore used to maintain the world-class premium Pilbara Blend product our customers love so much.

“Silvergrass is a further demonstration of our long-standing commitment to the Pilbara region in Western Australia where we’ve invested more than US$20 billion over the past decade.”

West Australian Premier Mark McGowan today led the formalities at a ceremony in the Pilbara to mark the opening, with full commissioning scheduled before the end of the year.

The brownfields expansion project will lower mine operating costs as a result of the construction of a nine-kilometre conveyor system that will replace traditional road haulage routes linking Silvergrass to the existing processing plant at Nammuldi.
More than 500 jobs as well as opportunities for indigenous contracting were created during the construction of the mine.

Contracts worth more than $180 million were awarded during the construction phase, including contracts to Western Australian company Decmil and Perth headquartered company RCR Resources.

“Dozens of local businesses have benefitted from the purchase of major items including modular buildings, gantry cranes and a waste water treatment plant.”

Chris Salisbury said “The strong partnership we have forged with Sinosteel over the past 30 years is one of Australia’s most significant trading relationships. It has seen Rio Tinto deliver more than 250 million tonnes of iron ore to China, undoubtedly helping transform the Chinese economy.”