Miner Lundin Gold announced as part of its June quarter financial report that the Fruta del Norte project under development in Ecuador is making progress, with overall engineering 48% complete and construction now at the 21% mark 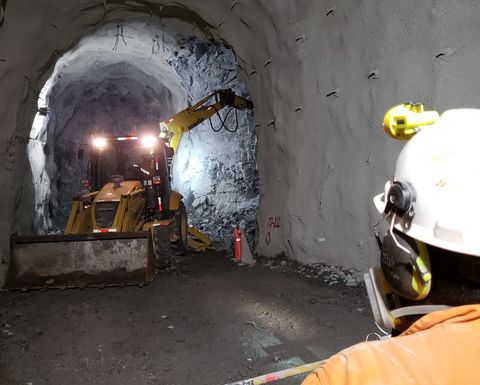 President and CEO Ron Hochstein said, as of June 30, underground mine development at the planned operation in the Zamora-Chinchipe province had reached 2.2km (1,030m and 1,167m in the Kuri and K'isa declines, respectively) and the rate of daily advance is steadily improving at about 5.9m and 6.6m at each decline. Its target had been 5.16m daily.

Both process plant and main substation excavation were progressing at the end of the quarter, and at that point were nearly complete. Installation of ball mill piers and grinding building foundations were 84% complete when the quarter closed, and the carbon-in-leach tank bases were 20% done.

Lundin said that equipment fabrication for the process plant equipment is also on schedule; first equipment for that, the thickeners and the primary jaw crusher, are expected to be on-site during the third quarter.

Now 70% complete, the project's North access road has less than 2km remaining to be built; the section left includes a steep escarpment that will require careful attention for technical and safety reasons. The road should be finished by the end of the third quarter.

The tailings storage facility, polishing pond and east diversion ditch access roads are now ready for the mine to start, and work is under way to clear and grub the polishing pond area.

The fuel storage station is nearing completion at Fruta del Norte and is now in the final commissioning stages. Work continues on the mine maintenance shop, substation and compressor station.

"During the quarter, we continued to de-risk the project," Hochstein said.

"Underground development rates exceeded our target advance rates and today we are more than half-way to the orebody and remain on track for first gold production in the fourth quarter of next year."

He also noted that an offtake agreement was inked in early August with Boliden for a "significant portion" of its gold concentrate.

"Combined with the Orion offtake agreement, we have now secured contracts for about 80% of our anticipated production," he said.

Looking forward, the executive said it is focused on its first gold goal, and as such are planning several targets. They include completing projects now in process, receiving equipment, continuing to advance underground development, adding its transmission lines to the national grid and beginning construction of the Zamora River bridge.

Over the coming year it also is aiming to receive approval of the Mountain Pass Quarry environmental license and developing the quarry, awarding the contracts for the design and supply of the paste plant and water treatment plant, advancing the engineering and equipment procurement and beginning earthworks and site preparation for the two plants.

Mill is processing stockpiles but mining is ramping up.