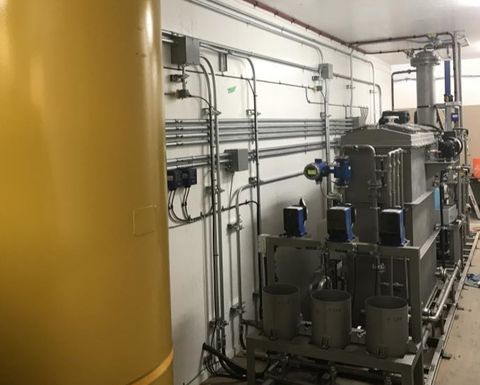 A look inside the MGX/PurLucid lithium extraction process

With the system now in operation, officials said January 17 it is under contract with an unnamed oil sands steam-assisted gravity drainage (SAGD) operator to process its evaporator blowdown water (EBD).

The three-week operational study period in December, which has served as preparation for an additional deployment of a new 10m3/h (1,500 bpd) capacity system now being placed, met all of the companies' key chemical performance metrics including a 99.7% reduction in silica, a calcium reduction of 88% and a 72% drop in magnesium levels.

"Additionally, total suspended solids in the treated product were non-detectable, effectively creating a clean water by-product for reuse," MGX noted of the study, which generated about C$30,000 (US$25,000) in revenue in its first three service weeks.

"Hourly throughput during the commissioning phase was also reported as stable and optimisation of control systems were successful in maintaining flow balance, overcoming any concerns of outdoor operations in cold weather conditions."

MGX and PurLucid have made great headway as of late with their rapid lithium extraction technology. MGX just announced in late August that it had consistently achieved 99.7% recovery from complex global brine sources.

MGX was founded in 2012 as a conventional mining company to what is now a diversified cleantech firm. Its technology has shown cost and quality enhancement benefits for various brines, including petrolithium, natural brine, mine and plant wastewater and more.

MGX and PurLucid first announced an acquisition and engineering partnership agreement in September 2016. It now owns 60% of PurLucid and has the right to acquire up to a 100% interest in PurLucid through successive investments.

Commissioning at oil sands property to come next month