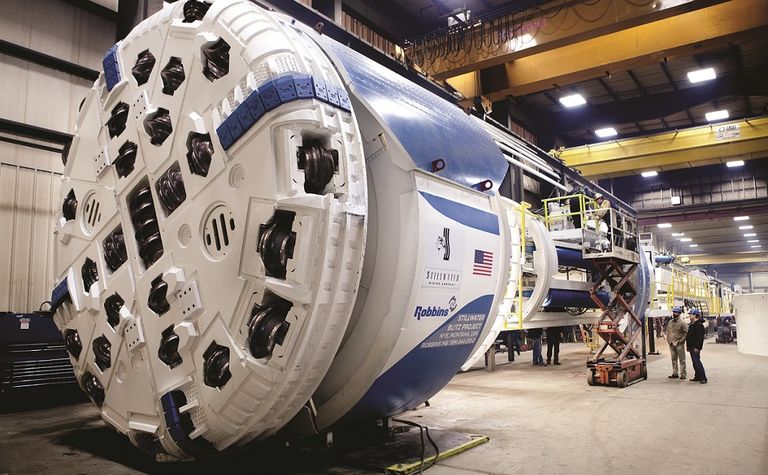 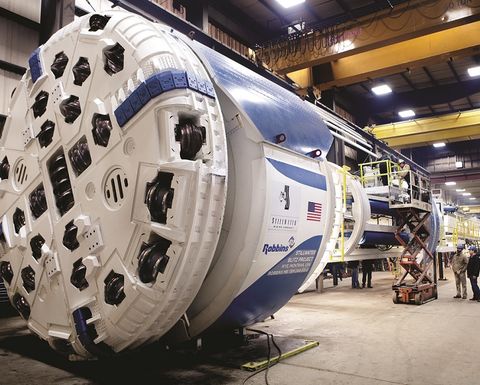 Tunnel boring machines or ‘TBMs’ are not new to mining, but their potential is often underestimated and, as a result, the technology is underutilised across the industry. Modern technologies mean that TBMs offer the potential to develop infrastructure faster, more safely and more economically, particularly at deep operations.

In addition to the development of access and ventilation drifts, TBMs can also be used to create declines, as demonstrated at Gem Diamonds’ Ghaghoo operation in Botswana where Redpath created a 458m-long shaft through soft Kalahari sand using an open-face tunnel shield, and determined the extent of orebodies.

Benefits include enhanced safety and ground stability when compared with drill-and-blast techniques, increased advance rates and lower operating costs – a significant boon in today’s tight times – making them well worth a second look.

Success stories include Anglo American’s US$1.9 billion 5Mt/y Grosvenor coal project in Moranbah, Central Queensland, Australia, which reached a key milestone in February when its TBM broke through the second of two drifts at the mine 29 days ahead of schedule.

The US$38.4 million earth pressure balance machine was used to create two drifts – one for the conveyor that transports coal from the underground longwall to the stockpile area on the surface and another for people and equipment to access the mine.

Grosvenor’s underground construction manager Adam Foulstone says: “From an industry perspective, we have achieved the highest levels of collaboration and production through tunnelling. On our best production day, we installed 18 concrete rings to support the tunnel, so about 25m, and our best week was 78 rings, or 110m.”

In order to find out more about the technique’s potential and the benefits on offer, MM teamed up with OEM Robbins to look at how the Stillwater mine in the US, a long-time convert to TBM technology, is making use of it.

The Beartooth Mountain Range in Stillwater, Montana, is home to the J-M Reef – a substantial deposit of platinum and palladium that winds through the range, making it a prime spot for mining. It was in this reef that Stillwater Mining Co (SMC), North America’s largest supplier of platinum-group metals, began its operations.

The mine’s history includes nearly three decades of TBM use, beginning with the excavation of a development tunnel in 1988. In all, the mine has excavated nearly 30km of tunnel using TBMs, with more work ongoing. The mine’s latest effort, a 7km-long tunnel for haulage and ventilation, is utilising a 5.5m-diameter Robbins Main Beam TBM. 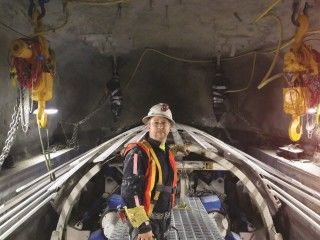 Curt Jacobs, project superintendent for Stillwater Mine, works to prepare the TBM for launch from its inner chamber

As the mine sees it, there are many advantages to using a TBM in a mine given the right application. “A TBM is not viable in all areas, but in deep areas it definitely is. For us, it provides both an exploration platform and ventilation for the life of the mine, so we are getting two services in one. This is particularly advantageous when the tunnel course is long and straight,” says Curt Jacobs, project superintendent for SMC.

The geometry of the orebody and locations of reef access at Stillwater make for long, straight tunnels. “In our mine the orebody runs perpendicular to a river valley, east to west for 45km. That lends itself well to TBMs, because you can develop large reserve blocks that are easier to ventilate and don’t require as much ground support as a drill-and-blast tunnel,” says Mike Koski, chief geologist at SMC.

The mine has carefully weighed its options for its development tunnels, opting for TBMs for a number of reasons. While the capital cost for TBMs is approximately 1.5 times that of conventional mining fleets, the mine has shown over time that TBMs need 33% of the operating costs. Their advance rates are also significantly higher – anywhere from three to over five times that of a comparable drill-and-blast operation.

TBMs also eliminate blasting and leave a circular cross-section, which increases tunnel integrity and reduces ground-support requirements. In addition, blasting requires evacuation of the blast area and results in lost work time due to shutdown of areas near the blast zone for safety. The circular, smooth tunnel profile produced by TBMs reduces air flow resistance when compared with conventional tunnelling methods that leave the wall uneven and rough.

Stillwater’s latest endeavour is the Blitz Tunnel, a development tunnel of at least 6.8km that will provide information about the reef along the eastern portion of the mine. 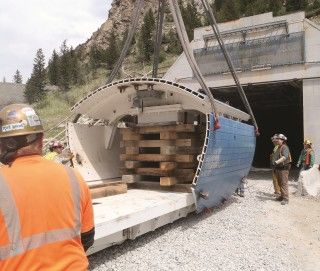 The versatile Robbins TBM is equipped with pockets in the roof shield, allowing for installation of steel slats using the McNally Ground Support System in difficult ground

A 5.5m-diameter Robbins TBM is being used to create a rail-haulage tunnel that will be used for the life of the mine and to determine the extent of the reef. Launched in September 2012, the Robbins Main Beam TBM was fitted with 19in (48.3cm)-diameter disc cutters for excavation in rock averaging 130MPa UCS. Five major, potentially water-bearing faults are expected along the TBM drive. Up to 1,892L/min of water have been encountered at the Stillwater mine in the past, and this same amount is possible at fault zones along the TBM alignment. To combat these conditions, the TBM is equipped with 360° probing and grouting capabilities in order to grout in areas where excessive water is encountered.

Detecting the reef in relation to the TBM requires careful analysis using two core drills mounted on the machine. “Steering the TBM is an interesting process because we have very complex geology here. We do diamond [core] drilling ahead of the machine, above the machine, and to the side after every 150m,” says Tyler Luxner, senior production engineer for SMC.

The operators make adjustments to the TBM bore path based on the perceived distance to the reef. “We don’t want to get too far away from or too close to the orebody. The ore zone is located in a very distinct layer of igneous rock, so if we penetrate the right rock types then we know we are in the right place, and if we see some ore, we know exactly where we are,” says Koski.

TBMs can also be used for decline access tunnels and other types of tunnels at mines. The technology can be customised and can use any type of ground support currently supported by drill-and-blast operations.

“Mines owe it to themselves to take a serious look at TBMs because of the increased productivity, improved ground support, and final tunnel shape. It’s worth looking at. My advice is to take your time, and try not to cut costs in order to set it up right the first time.

“At Stillwater that is part of our success – taking the time to set up each project properly, and doing thorough training to make it successful. If you focus too much on the capital cost and what you can cut, that can wind up hurting you later on,” says Cole Deringer, development engineer for SMC.