An employee at Teck’s Greenhills coal operation in Canada has developed a novel solution to a common maintenance problem, saving the mine time and money 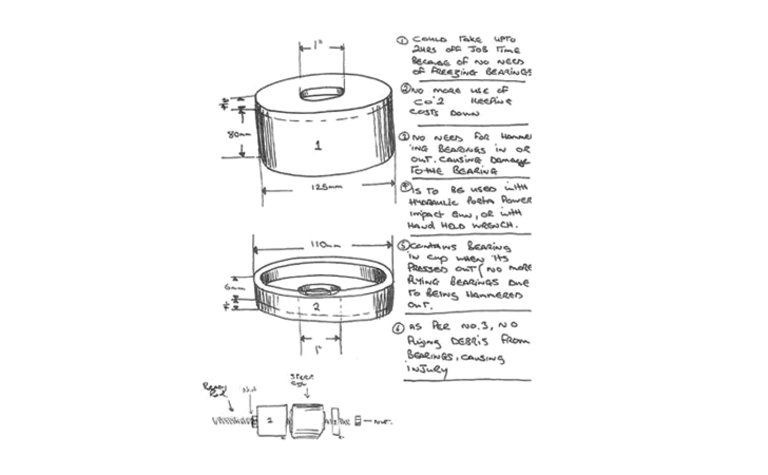 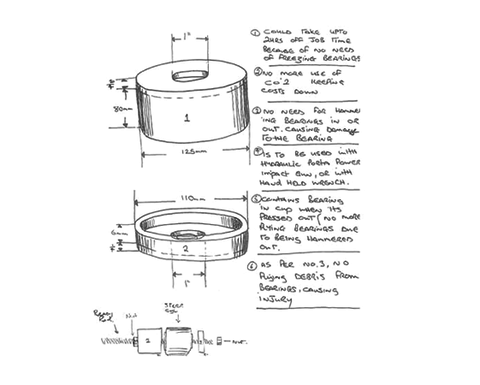 A common activity undertaken in the heavy mobile maintenance workshop is the changeout of the steering bearings on haul trucks, which takes place around 236 times a year.

In January 2016, the Reliability and Maintenance Engineering (R&ME) group was approached by a maintenance supervisor and asked to evaluate the feasibility of developing a new tool conceived by Chris English, heavy mobile mechanic at Greenhills, for removing old bearings and inserting new ones into the steering mechanisms more safely and efficiently.

Traditionally, a hammer had been used for removing and inserting these steering bearings into the steering mechanisms; however, this method presented two safety risks. First, there was a possibility that the bearings could eject from the bore and injure someone. Second, because the bearings are made of 'hardened' steel, there was potential for them to shatter upon impact with the hammer, creating flying shrapnel in the workshop.

In addition, the conventional hammer method was less efficient overall, and due to the interference fit, it was difficult to drive the bearing into the bore squarely. Furthermore, the hammer method is not an appropriate way to install bearings into housings as the bearings can be damaged in the process, which impacts the reliability of trucks and compromises production and safety performances.

Using this method, the removal and installation procedure took, on average, two hours, and finding a way to minimise the mean downtime of the fleet was  an important area for continuous improvement.

R&ME received a conceptual design of a new steering bearing tool from English, with sketches and a list of benefits. After an initial review, the group then further developed the design during a brainstorming session with a group of tradespeople.

The final product was made entirely from standard materials, with the exception of one component that was machined at a local machine shop, which kept the total fabrication cost under C$500.

The tool was presented to the crews in April 2016, who then began incorporating it into steering bearing exchanges. Since then, the use of the tool has reduced the changeout time from two hours to one, while also eliminating the safety risks posed by the hammer method previously used.

Positive feedback regarding the new tool's performance has been received from mechanics, and plans for revisions to further improve the tool's effectiveness are now underway.

It is estimated that Greenhills can achieve an additional 236 hours of working time from its Komatsu 930E fleet annually as a result. Considering the difference in hourly operating cost between the Greenhills trucks and rentals, the annual savings based on this improvement are estimated to be $20,000.