Anglo American has released a comprehensive update of the technologies being developed and implemented across its mining operations, as well as further detail on the company’s carbon neutrality energy strategy. 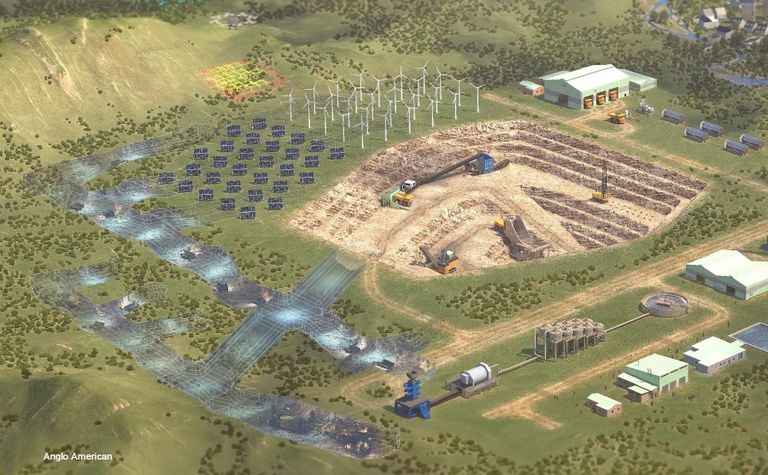 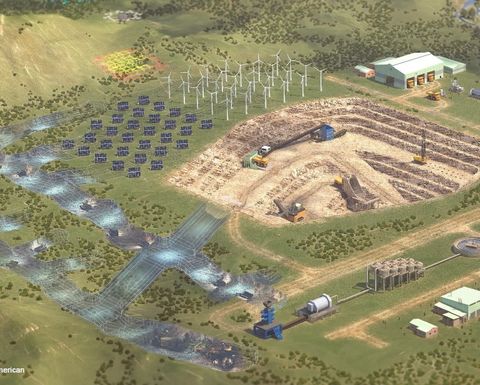 This technical and innovation update, which Anglo American called "a new trajectory for mining", included a focus on operational excellence, digitalisation through the company's VOXEL digital transformation platform, the latest developments in the company's FutureSmart Mining initiative and its multi-faceted pathway to carbon neutrality.

Tony O'Neill, technical director at Anglo American, commented: "Technology and innovation are central to how we are creating a more sustainable business - for our shareholders, our employees and our stakeholders across society. Across every aspect of our business, from mineral exploration to delivering our products to our customers, we are thinking innovatively to ensure the safety of our people, to enhance the sustainability of our business, and to deliver enduring value in its many forms for all our stakeholders.

"Our Operating Model provides stability and predictability to our performance, with P101 layered on to deliver new benchmark levels of performance across our operations. FutureSmart Mining is then integrating technology and digitalisation with the full spectrum of our Sustainable Mining Plan ambitions - particularly our water and energy targets and our pathway to carbon neutral operations by 2040. Together, our approach is providing the next step-change in our operating and financial performance."

P101 is Anglo American's productivity programme that includes initiatives focused on delivering improved performance and productivity across all the company's key plant and equipment. The goal is to ensure integration across all processes while focusing on value delivery.

For example, it includes tactical mine design that centres on planning the mine around the equipment while enabling high plan compliance and incorporating safety into the design. The company stated that this was a key contributor to delivering more than 25% improvement in shovel productivity at some of its operations.

In blasting design, fragmentation models are enabling fit-for-purpose designs, with improved fragmentation delivering improved truck and shovel payload sand milling rates. The company said it has eliminated unproductive trim/buffer blasts, with a 20-50% reduction in the number of weekly blasts and approximately 50% improved shovel loading rates in trim/blast areas. In blasting practices, the company reported a 50% improvement in drill and blast execution vs plan, which was enabled via real-time, in-field digital platforms.

Anglo American is using haul road digital twins to analyse and improve existing haul roads. At its Mogalakwena platinum mine in South Africa, this has resulted in a 23% reduction in haul cycle time and a 40% improvement in truck average empty speeds on the main haul cycle.

At the processing stage, P101 is being used to maximise processing value drivers for throughput, run time and recovery. For example, systematic debottlenecking through dynamic modelling has enabled targeted process design upgrades. Circuit reconfiguration has allowed increased process efficiency utilising existing infrastructure, such as a 7% year-on-year increase in throughput rate at the Minas Rio iron ore mine in Brazil.

For run time, the company said that remote asset monitoring allows mines to anticipate maintenance and model optimum shutdown strategy. The implementation of asset tactics, spares management and improved material handling have reduced blockages and improved plant stability and run time. For example, a 12% increase in weekly direct operating hours was achieved at the Moranbah coal complex in Australia.

At the recovery stage, geometallurgical modelling is being used to tailor operating parameters to mined material, including areas such as circuit reconfiguration, reagent optimisation, and operating parameter adjustment. A 2% increase in mass recovery was achieved at Minas Rio.

The financial value of the P101 initiative is significant, with Anglo American reporting that the 2020 run-rate improvement was approximately US$2 billion compared to 2017.

Using advanced process control (APC), Anglo American has automated the stability of some of its plant processes. Using APC, Minas Rio has achieved a 48% increased stability in float circuit, lifting throughput by 4%. At the Los Bronces copper mine in Chile, semi-autogenous grinding (SAG) mill throughput has been maintained at 32% greater stability, with a 17% reduction in energy per tonne milled.

Anglo American highlighted the additional sustainability benefits of APC. A 4% reduction in water consumption was achieved at Los Bronces grinding mills, and 4-12% energy reductions from APCs controlling SAG mills. It also reported an 80% reduction in plant micro-stoppages from plant-wide optimisers in South Africa and Brazil. Other sustainability benefits include minimised product loss and improved water efficiency from fibre optic sensor wraps that surround piping to dynamically model the flow of metal in process, and a reduction in maintenance of high-value moving parts such as motors, pumps and conveyor belts.

The company highlighted several ways that VOXEL is different to other digital platforms, most importantly that it is built for mining rather than built for equipment. In addition, it spans the full value chain rather than just equipment health, and it leverages technical and sustainability knowledge instead of only other industry knowledge. Finally, it uses digital twins of the entire value chain, not just a digital twin of one asset.

Everything in VOXEL is structured around an integrated data lake. Some of its functions includes rapid resource modelling, which creates a digital version of the ground where the mine operates to provide an ‘always right' model of ore concentrations; mine and processing planning, to optimise the plan to extract the required ore for the greatest value, with the least environmental impact and maximum safety; and asset maintenance optimisation, to ensure that maintenance on assets is carried out with the least impact on costs and plans overall and in the long term.

In addition, VOXEL has a focus on safety and health that detects patterns and optimises tactics that minimise safety risks and maximise healthy working practices. Anglo American said that it also encourages and supports its staff to ensure they are ready and able to identify and exploit opportunities presented by the technology.

VOXEL incorporates Digital Operational Planning (DOP). The company stated that digital literacy is a key enabler; it aims to build a digitally literate organisation, with training for all employees to drive a better understanding of data and digital concepts. VOXEL also enables remote work, for example from its Integrated Remote Operating Centre (IROC) in Chile.

Anglo American's FutureSmart Mining programme has four aspects that Anglo American said integrate technology and sustainability; these are ‘Concentrating the Mine', ‘Water-less Mine', ‘Modern Mine' and ‘Intelligent Mine'.

Concentrating the Mine includes bulk ore sorting, where the early rejection of waste increases plant grades and metal output. Bulk ore sorting rollout is already underway at Mogalakwena, Los Bronces and the Barro Alto nickel mine in Brazil, with other sites under study. At Mogalakwena, it has reduced energy and water intensity with mass reject of 5-20%.

Coarse particle recovery (CPR), also part of Concentrating the Mine, is a flotation process that allows material to be crushed to a larger particle size, rejecting coarse gangue and allowing water to release from coarser ore particles, improving energy efficiencies and water savings. It also enables hydraulic dry stacking. It has been approved at the Quellaveco copper operation in Peru, with commissioning expected in 2022, and is expected to result in up to 85% water recovery with hydraulic dry stacking and up to 4% production increase through tailings retreatment. It is also projected to allow a 12-35% increase in production through full expansion. Rollout is also planned at Los Bronces and Minas Rio in 2023, and the company is investigating options for the Collahuasi copper mine in Chile.

Hydraulic dry stacking, part of the Water-less Mine aspect, will allow low-cost, safe and geotechnically stable dry tailings. Benefits include eliminating the risk of liquefaction and an 85% increase in water recovery; it can also be repurposed, benefiting host communities and biodiversity. A unit is under construction at the El Soldado copper mine in Chile and is due for completion in the September 2021 quarter. Anglo American said that together with CPR, hydraulic dry stacking has the potential for 20-30% additional production at Collahuasi and Quellaveco within existing water licences.

The Modern Mine aspect of FutureSmart Mining includes a hydrogen truck and plant project. At Mogalakwena, the company plans to launch the first trial of a 300t hydrogen fuel cell truck later this year. A hydrogen plant and solar photovoltaic (PV) installation will be ready at Mogalakwena in the December 2021 quarter; this will be scaled up by 2024, with expected electrolyser capacity above 100MW. Anglo American said the key benefits of this include the potential to eliminate 46% of diesel-related greenhouse gas (GHG) emissions, equivalent to 1Mt of CO2e per year, which will also enable new local economies and job opportunities. In addition, seven Anglo American sites are expected to have renewable power and hydrogen by 2030.

The company also added an update on using microwave energy to precondition ores, which is part of its Concentrating the Mine aspect. The benefits of this include increasing throughput and recovery, a reduction in energy and water intensity, as well as hardness reduction in ores such as platinum (5-25%) and copper (8-12%). Rollouts are underway at Los Bronces, Mogalakwena, Collahuasi and Quellaveco.

Anglo American's carbon neutrality strategy focuses on six levers which it said, when connected, will "provide the architecture for a zero carbon future". They are:

Some of these strategies are already underway and on track in critical emissions areas. At Anglo American's operations in South America, all electricity supply is now contracted through power purchase agreements (PPAs), with offtake phased for ramp-up at Quellaveco by 2022.

In Southern Africa, the company has developed a comprehensive plan for renewables at its operations and has started discussions with governments, partners and multiple stakeholders. This includes the implementation of a hydrogen truck pilot that is already underway at the Mogalakwena mine.

At Anglo American operations in Australia, planning is underway to convert electricity supply to renewables. Vent-air methane technology has been identified as a target, with a demonstration unit under study development.

In an integrated view of value for Anglo American, the company projected that the P101 asset optimisation and digitalisation, technology development and conventional expansion could have 30-50% potential uplift in net present value (NPV) across 10 sites. The company concluded: "Leading capabilities [are] actively improving a competitive, world-class asset base to drive sustainable, attractive returns".