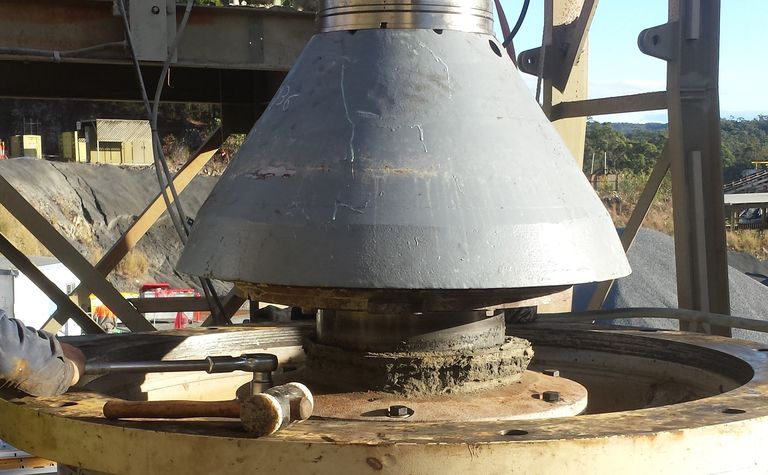 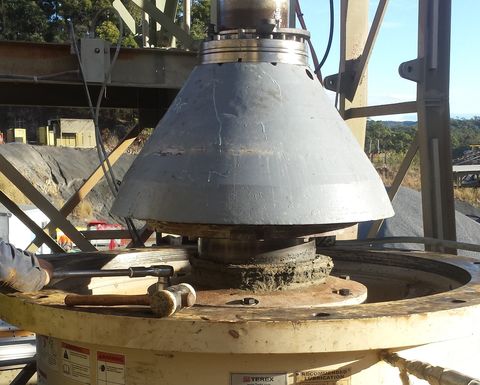 PRESS RELEASE: Head nuts are used to retain the inner mantle of gyratory crushers which wears during service and must be replaced periodically. Typically, as the crusher is working the head nut can tighten, making them extremely difficult to remove.

The traditional method of removing and replacing mechanical head nuts uses flogging spanners and sledge hammers with strike or shrapnel injuries commonly occurring. The removal process often requires parts to be cut away using oxy torches. Not only is this method time-consuming and dangerous, it is highly inaccurate.

In contrast, Technofast’s innovative EziTite Hydraulic HeadNut system is dramatically faster and much safer for installation and subsequent removal.

The system features a reusable hydraulic clamping nut which uses a simple hand pump to develop the precise tensile load required, integrated mechanical locking screws and a protective wear cover which is constructed to withstand the abrasive nature of the material being crushed.

The EziTite Hydraulic HeadNut assembly is simply screwed by hand onto the crusher shaft (replacing the original nut) until the base is tight against the working face of the mantle.

Hydraulic pressure is then applied into the sealed chamber through a quick release coupler on top of the nut body, applying the required tensile load and thus seating the mantle. The locking screws are then engaged and the wear cover bolted in place to protect the hydraulic HeadNut.

When it is time to remove the EziTite Hydraulic HeadNut the installation procedure is simply reversed and the nut is removed by hand eliminating the need for large hammers and flame cutting of any burn ring, therefore improving site safety and time taken.

“The EziTite Hydraulic HeadNut system offers a huge saving in expensive downtime, and is far safer for the maintenance workers.”

While most operations require the crusher’s mantle to be serviced every three months or so, Mr Blundell says some non-stop operations are replacing their mantles every 10 days due to the nature of the abrasive rock they are crushing.

“Certain mine sites run their crushers almost continuously, while machines that are crushing really soft rock and only running one shift, might only replace the mantle once a year.”

Mr Blundell explained that there are no special skills required to install and remove the EziTite Hydraulic HeadNut system.

“We generally show the maintenance guys how simple the process is the first time the HeadNut is installed and removed, but from then on they do it themselves.

“Once they have seen the HeadNut in operation, and seen how easy and safe it makes the mantle servicing job, they are rapt, and with just a standard hydraulic pump required.

“As one Maintenance Supervisor told me ‘We had a lot of OH&S concerns using sledgehammers and battering rams to tighten the standard head nuts. These new HeadNuts are great! The workers can do it all with a hand pump. That is a big improvement in safety. After seeing the Technofast HeadNut installed, the old way looks crazy!”

Mr Blundell explained that the EziTite Hydraulic HeadNut system is suitable for most crushers which are in service globally, including Terex, Sandvik, Cedar Rapids and Kawasaki machines.

“As all our products are manufactured at our in-house Brisbane, Australia production facility, we can manufacture the EziTite Hydraulic HeadNut system for any particular machine within a few days in most cases.

“We are also adding spares, such as wear covers as we produce more HeadNuts to suit different models of crushers.”

As the HeadNut’s wear cover is exposed to the tonnes of rock as it’s loaded into the crusher, it’s the cover which takes the brunt of the force.

“While the cover needs changing at most service intervals, our HeadNut can be used many times over. That’s one of its greatest features, unlike the standard head nut that’s fitted to the crusher.

“At one Queensland (Australia) mine site, it was taking a week to renew the mantle on a crusher, when if they had been using our HeadNut the same job could have been done in half that time, saving the company thousands of dollars in lost production.”

Mr Blundell explained that with standard head nut systems, there is no accurate way to measure the pressure applied on the head nut.

“The maintenance guys simply tighten the nut as much as they can and that is it.

“While with the EziTite Hydraulic Head Nut system, the HeadNut can be tightened to whatever clamping force is required for that machine, and the type of rock it is crushing.”

In the unlikely situation that there is a hydraulic malfunction, the locking screws can be used to release the load on the shaft by simply backing them off progressively.

He said the benefits of using the EziTite Hydraulic Head Nut system are outstanding and include vastly reduced downtime and maintenance problems, greatly improved productivity, repeatable accuracy of the tensioning operation reducing product variation, significantly faster throughout without compromising product quality and minimal risk of personal injury and collateral damage to capital equipment during mantle servicing, coupled with low level of skill required for operation.

The new design enables a 10% reduction in station height