The Ivanplats shaft-sinking team has reached the top of the high-grade Flatreef deposit – at a depth of 780m below surface – at the platinum-group metals, nickel, copper and gold Platreef project in South Africa 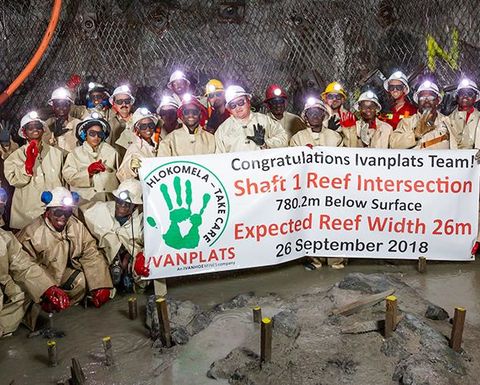 Members of the Platreef project team and its South African sinking contractor, Aveng Mining, in Shaft 1 at the intersection of the Flatreef deposit

PRESS RELEASE: The Platreef project is located on the Northern Limb of the Bushveld Complex. This is the first time that the Platreef - a strongly mineralised, polymetallic belt that extends northward from the town of Mokopane for more than 30km - has been intercepted by underground mining activity.

Ivanplats' Flatreef deposit, with a strike length of six kilometres, lies within a flat to gently dipping portion of the Platreef mineralised belt at relatively shallow depths of approximately 700m to 1,200m below surface.

The Platreef mining team has delivered the first ore from the underground mine development to a surface stockpile for metallurgical sampling.

The estimated thickness of the mineralised reef at Shaft 1 is 26m, with grades of platinum-group metals ranging up to 11g/t 3PE (platinum, palladium and rhodium), plus gold, as well as significant quantities of nickel and copper.

The 26m intersection will yield approximately 3,000t of ore, estimated to contain more than 400oz of platinum-group metals (PGMs).

Ivanplats' managing director Patricia Makhesha said: "This is a signicant milestone for Ivanplats and a tribute to the excellent work by the Platreef project team and its South African sinking contractor, Aveng Mining.

"Our focus is to keep advancing the Platreef Project along its critical path. We remain true to our commitment to build Platreef into the world's next great platinum-group metals mine ─ a showcase for South Africa and the international investors that have financed the exploration and development work."

Executive co-chairman Robert Friedland noted that while some investors have expressed concern about the current price of platinum, Platreef also has massive quantities of palladium, nickel and copper, as well as rhodium and gold. He said the steady surge in the price of palladium could see it become more valuable than gold for the first time in 16 years, and rhodium prices are near eight-year highs.

Palladium and rhodium are used as catalysts to control exhaust emissions in gasoline-fuelled vehicles, while diesel vehicles mostly use platinum. Platinum also is used as the catalyst in zero-emission, hydrogen-powered, fuel-cell electric vehicles.

"Building a new, large-scale mine such as Platreef is a capital- and time-intensive process that requires us to embrace the future, and the future we see will include a lot more electric vehicles using batteries and fuel cells," Friedland said.

"The Northern Limb is the future of platinum-group-metals mining. We will have the distinct advantage of having a highly-mechanised, underground mining operation with a small environmental footprint."

In July 2017, Ivanhoe issued an independent, definitive feasibility study (DFS) for Platreef covering the first phase of production at an initial mining rate of four million tonnes per annum. The DFS estimated that Platreef's initial, average annual production rate will be 476,000oz of platinum, palladium, rhodium and gold, plus 21 million pounds of nickel and 13 million pounds of copper.