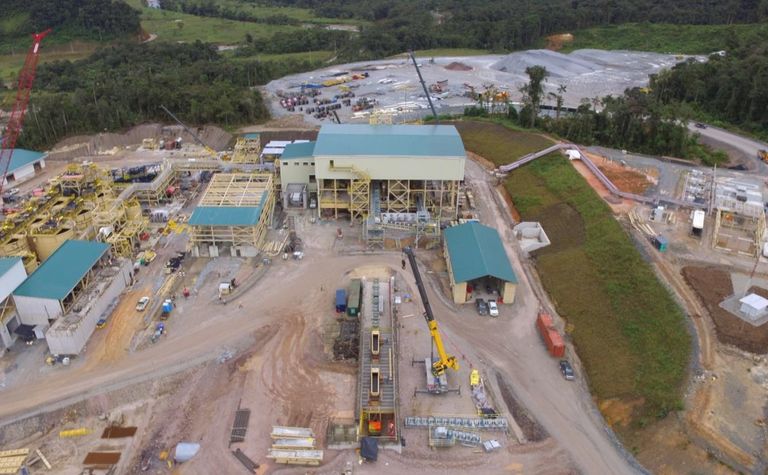 The start has occurred on schedule, president and CEO Ron Hochstein noted, and as of the end of May Fruta del Norte's overall construction progress was 73%. It has held fast on its September-quarter goal for commissioning of the process plant, which is now 80% complete.

The mine's development is also moving along, with underground development at 7.3km as of May 31st. Crews began mining the first transverse long hole production stope on June 16th, and as more stope faces are made available more crews will be added and ramp-up progress will continue.

"Critical path work on development to the South Vent Raise was 74 days ahead of plan at the end of May," officials noted. "Raise bore equipment is in country and is being transported and assembled, with drilling of the pilot hole expected to commence in early July."

It also confirmed that the initial underground paste backfill delivery hole has been completed. At the process plant, all major process components have been installed and wet commissioning of the initial systems is projected for early July through the third quarter.

Fruta del Norte's power line was at the 88% mark as of May 31st, and cable stringing was at 65%. Work on the Bomboiza substation construction reached 40% completion as of that date, and the company confirmed it should see energisation and hot commissioning later in the September quarter.

Finally, Lundin said that the construction work for the tailings dam has reached an elevation needed for commissioning to begin. In the meantime, work is continuing on schedule for the system's commissioning.

"Work is continuing to progress on schedule to reach the final starter dam elevation required for operations," the company said.

Lundin Gold, which wholly owns Fruta del Norte, said the mine is one of the world's largest and highest-grade gold projects currently under construction. First gold production is expected to be realised in the December quarter.