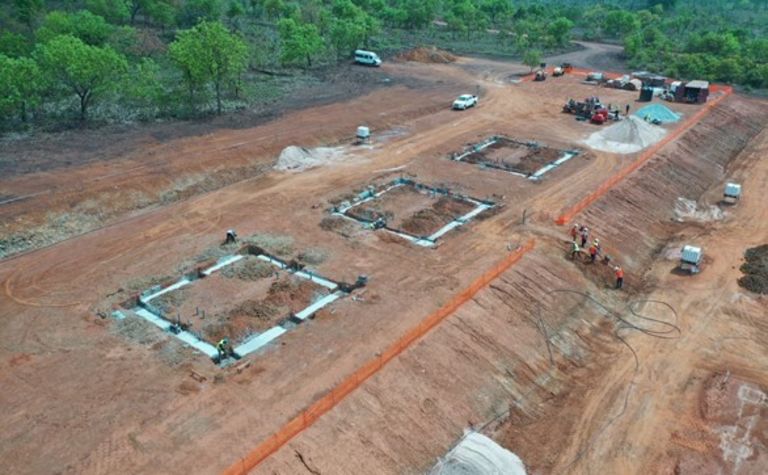 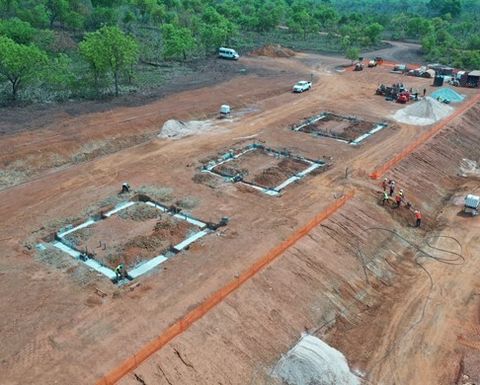 High above the Séguéla gold project in Côte d’Ivoire

The company has chosen Lycopodium Minerals as preferred engineering, procurement, and construction (EPC) contractor, and is currently on talks on the EPC or the mine's 1.25 million-tonne-per-year carbon-in-leach (CIL) processing facility and other supporting infrastructure.

Roxgold said its detailed engineering and long-lead and critical path items phase has begun, with the SAG mill order awarded to Metso Outotec.

The plant site bulk earthworks tender has been awarded as well, and that contract should be executed and works commenced in the June quarter.

Advancements are being made for the infrastructure's early works, including site access road upgrades and construction of the accommodation village; contracts have been given out for the camp bulk earthworks and construction, and first concrete was poured in February.

Surveying is now complete for the project's 33kV and 90kv power lines, which will connect to an existing 90kV transmission line on-site that itself ties into the 225kV ring main system around the country.

"These early work activities will enable a rapid ramp-up to full construction upon completion of the feasibility study and mine financing in the second quarter of this year," officials said of the work progress.

Finally, Roxgold has started a competitive tender process for the project's mining contract and has already conducted a detailed assessment of the proposals it has received.

Diligence is now being conducted on the shortlisted parties and plans, and it is targeting later this year to award the mining contract so that it can mobilise, establish its site and begin pre-production mining in early 2022.

"The Séguéla project has rapidly become a cornerstone asset for Roxgold, and we believe that [it] will provide significant value to all our stakeholders," president and CEO John Dorward said.

"The Feasibility Study is on track to be announced in the second quarter, which we believe will demonstrate the ongoing evolution of the Séguéla PEA with an enhanced mine life and project economics with the inclusion of the high-grade Koula deposit into the mine plan."

Fortuna completed the acquisition of Canadian miner Roxgold in July

Roxgold rocks it on schedule, under budget at Bagassi South