As the attention of the world turns away from oil and gas towards greener sources of energy, the spotlight on mining the minerals needed to support that transition is set to intensify. 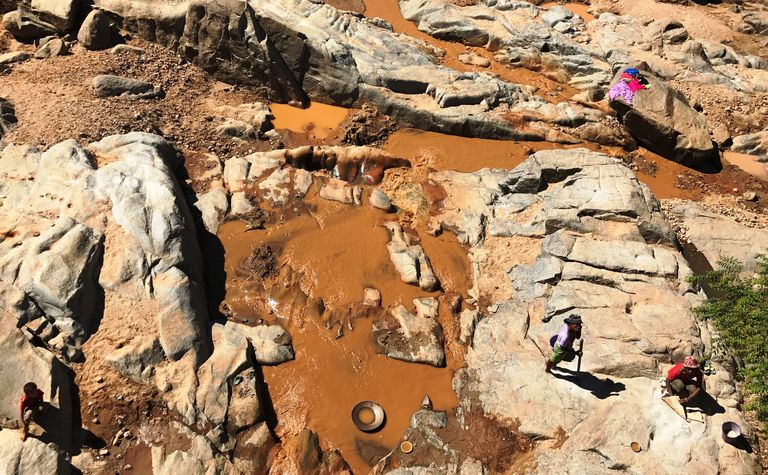 As the green transition gains momentum, global demand for rare minerals like cobalt - an essential mineral for the lithium-ion batteries used in electric vehicles, laptops and smart phones has thrown a spotlight on how the resources are mined, mining conditions and the opportunities and risks involved for governments, companies, and communities. This will undoubtedly transform the mining landscape in countries like Democratic Republic of Congo (DRC).

The mineral extraction industry is the backbone of the Congolese economy. More than 70% of the world's cobalt is produced in the DRC and over a million people in the DRC are dependent on the revenues generated from mining cobalt. As the source of at least two-thirds of the world's cobalt these supply chains are now essential to some of the world's richest and most well-known companies like Tesla and Volkswagen who consume cobalt for new electric cars.

The prevalence of artisanal and small-scale mining (ASM) in the cobalt supply chain - one of the biggest challenges for the DRC, companies, and human rights organisations - is estimated to be around 15-30% of production.

ASM is practiced in many forms and contexts. Its main challenges vary from region to region and often from site to site.  It has long been impossible to stop precious and rare earth metals and minerals being acquired from informal mining practices and entering the commodity supply chain nor is it desirable from a development perspective. However, the human rights issues, clashes with the army and unsafe working conditions are becoming impossible to ignore.

ASM is a major source of mineral resources production in the world. and often provides the only means of income and employment for rural communities, therefore it is vitally important for livelihood. So much so that the World Bank recognises ASM as a mechanism of poverty alleviation in developing countries.

However, the sector is perhaps better characterised for its various human rights challenges, high environmental costs and poor health and safety record. Because of its informal nature, miners often accept poor working conditions exposing themselves to known health-related risks and excluded from any legal protection, benefits or support. The health impact challenge stems from hostile working environments and high exposure to toxic chemicals like mercury when processing gold ore, which often leads to chronic diseases and death.

A large percentage of ASM miners are women, and regretfully, also children. Children working in ASM perform the same activities as adults, exposing themselves to all the risks. On the environmental front, because ASM mines usually don't have licenses to carry out extraction practises, environmental protections are ignored and can result in land degradation and water contamination. Toxic chemicals like mercury and cyanide, if not disposed of correctly, can easily enter local food chains. Consequently, this worsens the poverty and hunger situation.

There are currently believed to be at least 15-20 million artisanal miners in the world, and millions more that depend on them. Although several countries have tried to tackle the issues within the sector with formalisation or pushing alternative employment programmes/cooperatives, it is not easy. Informal miners argue they don't earn nearly as much through alternative jobs like farming, carpentry and sewing and often begrudge industrial mines claiming the richest concessions, sometimes on land where their families have lived for generations.

Critics view ASM as unsafe, unprofitable, dirty and unsustainable. Some hold the perception that ASM is a "get rich quick" activity which has led to miscalculated legislative policies and programmes.  There is no one-size fits all' approach that can be taken to eradicate the challenges ASM presents. The fact remains that small-scale and artisanal mining activities cannot simply shut down and will continue for as long as poverty or the absence of alternative employment in a particular area continue to necessitate them.

In some regions, the world's largest mining companies could be rubbing elbows with workers and children who often retrieve the rare minerals with basic tools with little or no safety equipment. A lawsuit in December 2020, involving Apple, Google, Microsoft, Dell and Tesla purchasing artisanally mined cobalt that involved child labour at various industrial sites including the Kamoto mine in the DRC led to a commitment to overhaul practices.

The reputational risks of ignoring these issues are serious. After the landslide at the Kamoto mine, the shares of Glencore, its majority owner, lost 7% of their market value. The clash between Congolese security forces on the behest of the government and illegal miners a week later also made investors jittery.  The fate of these companies and of the workers that supply to them are becoming increasingly intertwined.

While one in three vehicles on the road will be electric by 2030, electric vehicles are still mostly attractive to ethical consumers. "Blood batteries" will have limited appeal to the modern marketplace, and the practices are receiving growing media and legal focus.

The ASM sector has been a topic of discussion for the international development community for years and there have been some changes and progress. Examples include the OECD and the World Bank, who have developed standards and tools to help formalise the ASM sector and establish standard due diligence mechanisms. Other initiatives to better integrate ASM into global economies include the Alliance for Responsible Mining (ARM)'s Fairmined Standards, Fairtrade Gold and the Global Mercury Partnership. These all help to provide minimum standards of production, support the sector's formalisation and establish a "chain of custody" to ensure traceable supply chains from mine to market that are free from conflict and human rights abuses.

Improvements are also happening on the business front with companies committing to set up responsible sourcing practices. For example, in 2020, Tesla's impact statement outlined a plan to increase transparency in its supply chain and also struck a deal with Glencore to help maintain better control over its cobalt supply chains. Following suit,  Volkswagen has joined the "Cobalt for Development" initiative alongside BMW, Google, and Samsung to develop sustainable "artisanal" cobalt mining with strictly ethical practices.

While there is a general consensus that formalising the sector will eradicate some of the major issues, this also requires countries to install good policies and practices. Governments need to install legal frameworks that remove barriers to formalisation and are not punitive to marginalised communities and streamline over bureaucratic licensing processes to make it cost-effective and rewarding to gain a license.

Only practices that work directly with miners themselves are going to be effective. Solutions must be cheap, easy and quick to introduce, and incentives to help miners access finance (including microfinance) and technology need to be established. Any changes to existing processes must provide a rapid rate of return for miners, and knowledge on the ground must be collected better and shared more widely and wisely. Companies involved in these chains must take more responsibility for the investment and provision of greener and more sustainable mining techniques that miners can implement.

ASM will continue to play an important role in many developing economies and can be a huge force for good, but it needs cleaning up to shift the sector towards greater productivity, equity and sustainability. This will require cooperation and collaboration on all fronts.