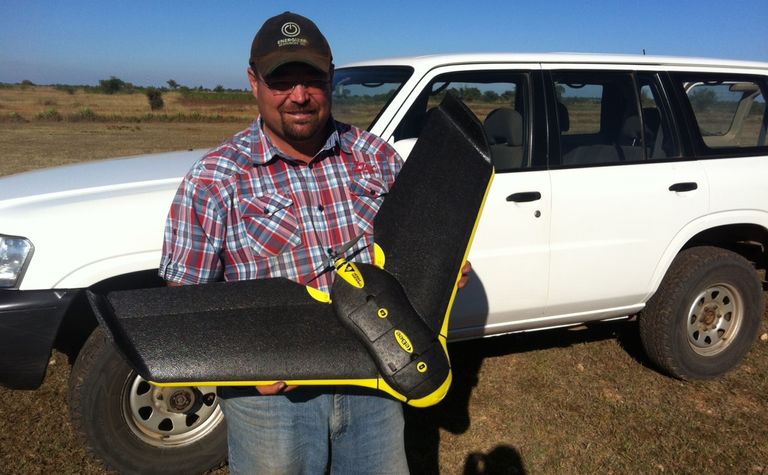 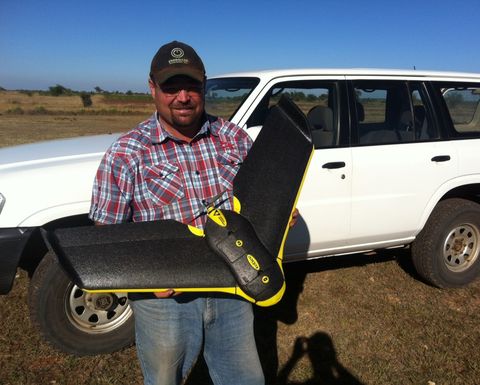 UAVs can be used to generate 2-D or 3-D maps for exploration, monitoring and surveying at existing mines

A prime example of a military technology that has found its niche in mining, unmanned aerial vehicles (UAVs) or drones can be used to generate 2-D or 3-D maps for exploration, monitoring and surveying at existing mines.

They can be used for complementary mapping of haulage road profiles, mine security, revegetation mapping, volumetric surveying of stockpiles and waste dumps, pipeline and conveyor monitoring, slope stability monitoring, tailings pond and equipment inspections, and environmental management tracking. In short, their uses are endless and at a fraction of the cost of helicopter or winged survey services (and with significantly fewer regulatory restrictions), UAVs offer a highly effective alternative to traditional surveying solutions.

MM spoke to senseFly, a leading UAV manufacturer, to find out about a recent mapping project in Madagascar.

Off the coast of East Africa, in Madagascar, Energizer Resources’ flagship Molo graphite mine is coming to life. Part of the 1,000km2 Green Giant graphite project in the country’s arid south, Molo spans 5km2 and is thought to contain 80-120Mt of high-quality, all-flake graphite — used in refractories, batteries and consumer electronics – making it one of the largest such deposits in the world.

Having released its preliminary economic assessment for Molo in February 2013, Energizer contracted an engineering company, DRA, to perform a full bankable feasibility study, in order to determine whether or not it was viable to bring Molo into production.

As part of this study, a full land survey was required to create a 3-D contour map of the site. The team would use this output to determine the location of the mine’s dam and that of its accompanying pipeline, as well as the positions of plant assets such as buildings and equipment.

“For this survey we examined various approaches,” explains Eric Steffler, geomatics manager at Energizer Resources. “We looked at flying a LiDAR [light imaging detection and ranging] survey, using manned aircraft, which would have enabled us to produce a full hydrological model of the region, covering 3,000km2. However, this would have been very expensive, involving the importing of aircraft from South Africa, running to hundreds of thousands of dollars.”

Luckily, DRA discovered that another organisation had already flown some of the area in question. Granted access to this info, Energizer and DRA could narrow down the target region to a more manageable 150km2, but that still left the question of which survey method to employ.

“We chose drones for two reasons,” Steffler says, “first, the price was very low compared with a LiDAR survey, which would have cost hundreds of thousands of dollars, even with the reduced survey area. The second was that, by making a capital investment in two eBee drones, we could use these on our other properties.”

In terms of creating the project’s required outputs, Steffler planned first to create a digital terrain model (DTM) in grid format. This would then be used to generate 3-D contour maps of the site (eight sets in total), featuring half-metre and two-metre contours.

“Air photo interpretation was also required to determine the locations of villages, roads, crops, and culturally significant items such as tombs and historic trees,” Steffler says, “plus, we needed to examine the quality of various roads.”

With the survey’s 150km2 total coverage easily at the larger end of UAV mapping projects, Steffler planned approximately 300 flights, each with an average flight time of 35 minutes. Average flight coverage was 2.5km2 with each capturing some 150RGB images (15,000 photos in total). 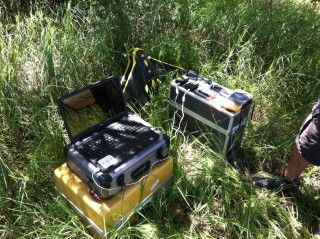 A senseFly eBee in the field

“We set a ground resolution of 9.9cm in the drone’s software,” Steffler explains. “This meant that after processing the images, we could still achieve the 20cm accuracy DRA required. We also used the software’s multi-drone function to manage flying two UAVs at the same time.”

Since no existing control data was available, Steffler’s team also used a GPS system to locate and post-process 70 ground control points (GCPs) across the project area. However, this GCP work was not without its challenges.

“After flying for a few days we noticed that our control points would go missing. These were made from plywood, painted white, with crosses marked in black duct tape. Local residents would take them and use them for fixing their roofs, or as tables. So, to stop this happening, we hired locals from the nearby town to sit close and guard the control points as we flew,” Steffler explains.

Energizer’s three staff spent a total of 90 days in the field, setting GCPs and flying the drones. Steffler then managed the data processing himself, spending up to 12h/d on this task – over 120 days in total.

“With 10-12 flights flown each day we had 16-18GB of data to process every night,” he says. “We needed to buy a more powerful computer for this. Then, once the entire survey had been flown, we had to merge the data together. We used SAGA GIS for this and it took us over two months.”

Having successfully completed Molo’s UAV survey and the outputs used to inform DRA’s feasibility study, Steffler is effusive in his praise of drone technology. “The return on our investment has been amazing,” he says.