An autonomous robot has been developed under an EU innovation initative that can perform underwater surveying missions in flooded mines. 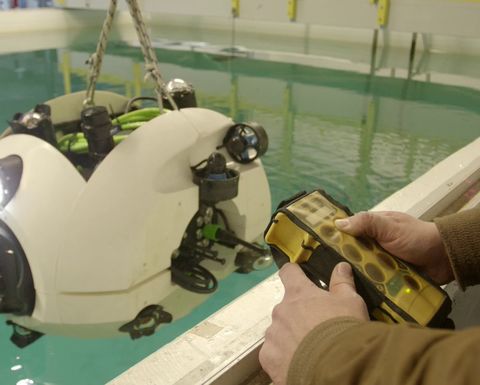 The UX-1Ne, developed under the UNEXUP project supported by EIT RawMaterials, is initially set to be trialled in a survey of an abandoned underground salt mine.

The objective of UNEXUP is to commercially deploy a new raw materials exploration / mine mapping service based on a new class of mine explorer robots, for non-contact assessment of Europe's flooded mines.

The robot is a new iteration of the UX-1 robot, but adds hardware and software improvements such as easily swappable batteries, faster data retrieval, an additional camera, an additional scanning sonar, ease of transport, and lower weight.

"These improvements, together with better geoscientific instrumentation, will make it more versatile and effective in the field, resulting in more productive and cost-effective missions," wrote a  UNEXUP statement.

"The inaccessibility of the operational environment makes autonomy a critical and primary objective of the project, which will present a substantial effort in resurveying mineral deposits in Europe, where the major challenges are geological uncertainty and technological / economic feasibility of mine development."

The third set of UNEXMIN's field trials, at the inactive Urgeiriça mine in Portugal, is now ongoing