In this article from the January 1916 issue of Mining Magazine, M T Taylor recommends a method for getting horses into underground mines through small shafts 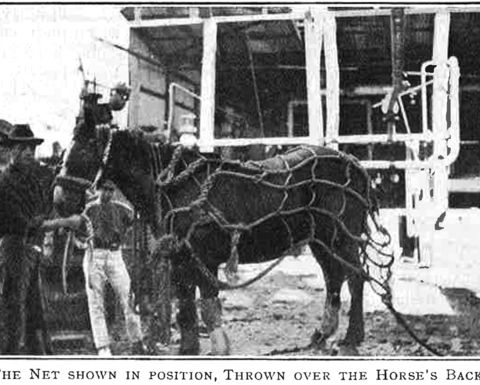 It has long been recognized that the use of horses for underground traction is one of the cheapest and most flexible methods that can be adopted for conveying broken ore from the various stopes to the shaft bins, but considerable difficulty is often experienced, owing to the small dimensions of the mine shafts, in transporting them from the surface to the underground levels.

A method that I have used at various times with most satisfactory results is described as follows: A net, the dimensions of which are given below, and suitable for lowering horses from 14 to 15 hands high, is thrown over the horse’s back, the loop ends toward the head, and the running rope is passed through the loops. These being drawn taut, the bottom ropes are brought tight around the animal’s hocks and he is forced into a sitting position.

If the animal is quiet no further tackle is needed, except to strap his four legs together and secure his head to the main haulage rope. If the animal is fractious, his knees should be padded with bagging, and after the net is placed over him, he should be thrown. To do this, first strap up one of the front legs, and by placing a strap or rope round the fetlock of the other, and then carrying the other end over the horse’s wither, at the same time keeping a strain on the rope, endeavour to get the horse to step forward. By this means you will pull up the other leg, and the horse immediately falls to his knees. From this position he can easily be thrown on his side. Strap the four legs together and also secure the head to the main haulage rope. When this is completed the horse is ready to be hauled over the shaft. 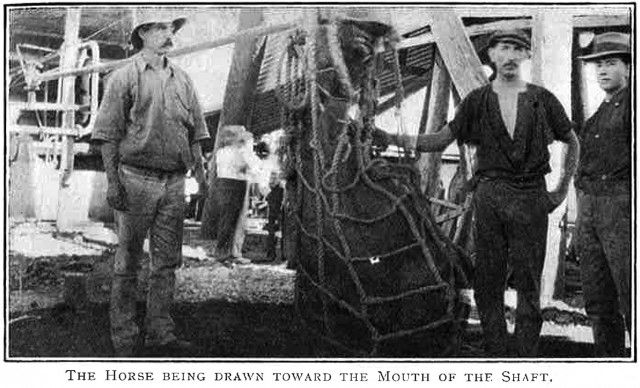 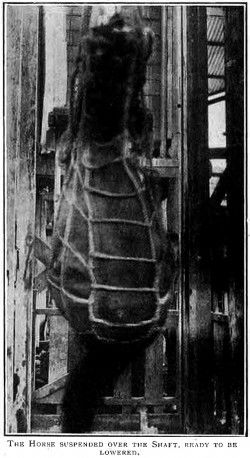 It is wise temporarily to cover the shaft at the surface until the initial operations are completed. Planking should also be placed slantways against the back of the shaft at the landing plat underground, so that the horse will slide clear out on to the level. Where iron plat-sheet are used, these should be covered; otherwise the horse’s hoofs should be bound up in bagging to prevent him slipping when endeavouring to regain his feet when released. My first illustration shows a horse 14-2 hands high ready to be thrown; above, the animal being drawn toward the shaft; opposite, the horse is shown hanging over a 4ft. by 2ft. 6in. shaft, ready to be lowered.

Industry must evolve towards less waste rock and tailings

A new use for old shafts