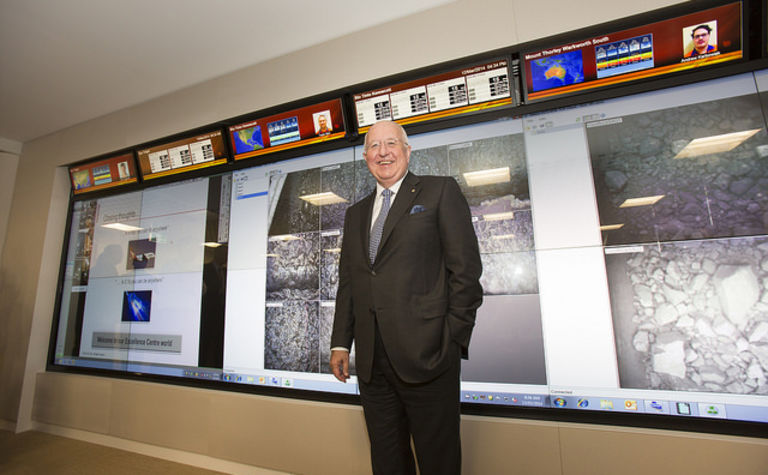 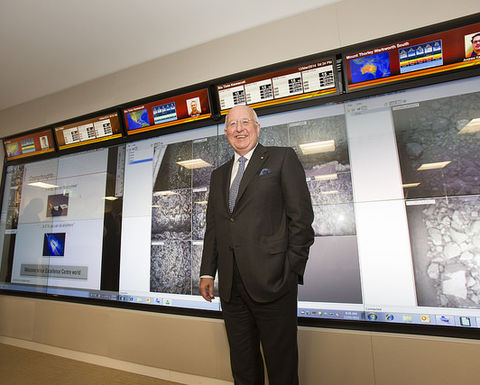 Sam Walsh, CEO of Rio Tinto, at the unveiling of the company's Processing Excellence Centre in March 2014

John McGagh, head of innovation at the company, told Mining Magazine in a recent interview that by the end of 2015, 85% of Rio Tinto’s open-pit mines will be channelling data to the MEC. This will allow the team to look at any vehicle at any of its mines across the globe 0.3 seconds behind real time. At present, approximately half of the company’s operations are plugged in.

The PEC was built on the concept that there are common processes within mineral processing plants, such as bulk handling, comminution, rheology, cycloning, flotation and dewatering regardless of the type of material being processed. By collecting and analysing data from a range of operations, Rio Tinto has been able to develop models and increase the efficiency of its processing operations globally, as well as detect and address potential issues before they occur.

“We’ve got the PEC that covers key processes in minerals recovery. Mining involves a slightly different set of processes, such as drill and blast, load and haul, convey and crush, and the sensor base collects data from different arrays including the orebody model, geography, geology and vehicles. It’s a different technology set,” explained McGagh.

The MEC is expected to drive similar efficiencies across Rio’s mining operations, allowing predictive maintenance procedures to be implemented among other things.

The facility is located next door to the PEC in Brisbane. “They’re sister facilities and use the same technology to interact with data, so they are based on the same premises. We have two collaboration and visualisation environments (CAVEs). Each is a purpose-built room designed for humans to interact with data, including some of the world’s largest touch screens. Teams of people can manipulate data, replay it to check commonalities and identify trends,” said McGagh.

The MEC began extracting data in December 2014, but was built on systems that Rio Tinto began developing seven years ago with the University of Sydney. “We’re planning a ribbon-cutting ceremony in the middle of the year,” McGagh added.

The third piece of the puzzle, Rio Tinto’s Excellence Analytics Centre, will be officially opened at the end of March in India. The centre is home to Rio Tinto’s data scientists and modellers who undertake advanced mathematics, modelling and develop algorithms to support both the MEC and PEC.

McGagh hinted that there may be further facilities in the pipeline too. Read the full interview here.