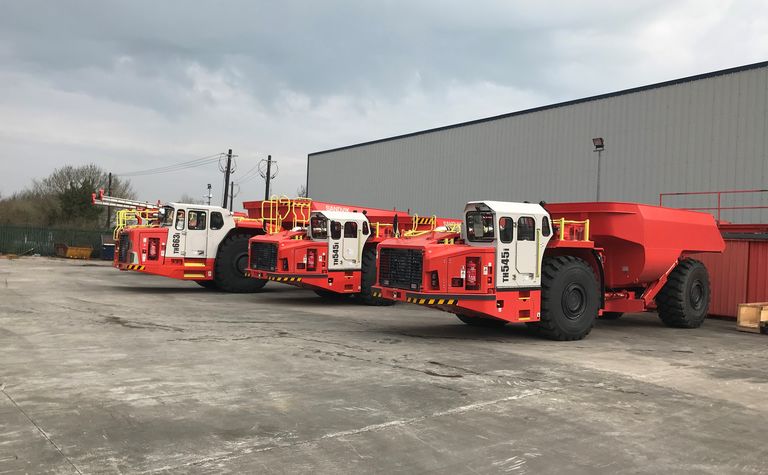 The TH663i is equipped with a Volvo Penta engine

The Stage V compliant trucks do not only have to accommodate complex new engines and circulation systems, but also work flawlessly in some of the world's toughest working conditions - not on sunny, open European roads.

The Stage V regulations, which are due to come into force in January 2021 - depending on efforts to postpone them due to the COVID-19 aftermath - will tighten restrictions on non-road engines and equipment and set stricter limits on emissions of particulate matter.

The restrictions have been developed by the EU to further limit carbon monoxide, nitrogen oxide and hydrocarbons emissions by industrial vehicles, as well as the mass of particulate matter - as much to tackle worker safety and address wider environmental concerns.

MM talked to Pia Sundberg, product line manager for trucks at Sandvik, about the story behind its latest Stage V-compliant underground truck, the TH663i, which is equipped with a Volvo Penta engine and is currently undergoing testing at the Boliden-owned Tara zinc mine in Ireland that will last 6-8 months.

What are the toughest challenges in designing cleaner vehicles for underground mining?

There are very practical challenges when developing underground truck technology: the equipment is expected to perform reliably and with high uptime on continuous ramp drive in a harsh environment. Heat generation and fire risks must be very well managed, and as the ride is rough and the tunnels narrow, the equipment must stay as compact as possible.

The market for underground trucks is niche, and long intensive cooperation is needed between multiple stakeholders. The application must be very well understood. However, usually the collaboration is rewarding for all participants, including the OEM and the engine manufacturer, as the lessons learned and the benefits can be utilised in other projects.

Are there standards to follow for mining equipment engineers when integrating the Stage V engines?

The European Stage V legislation which we follow doesn't require diesel particulate filter (DPFs) for engines above 560 kW, which leaves our TH663i out of that scope. The TH663i can also be equipped with a DPF, but in that case you would need to select a lower stage engine without after-treatment instead of the Stage V, with selective catalytic reduction (SCR) only.

There aren't really standards to be followed from an equipment point of view, for example there isn't an applicable standard that would define a test cycle for determining the particle mass and size distribution.

How important is transparency in the emissions results that trucks achieve?

Transparency and aiming for accurate results in the emissions results are very important. This is an interesting area because there are no (particle mass and size distribution) standards which would dictate what to measure and how.

However, in addition to the manufacturers' own tests, there are some third-party tests and certificates. (Canadian government-backed research body) CanmetMINING performs emissions testing and certification of diesel engines, as does the US's Mine Safety and Health Administration.

How important will the performance of Stage V engines become in the years ahead?

The technology has a tendency to advance; when a certain required level has been reached, sooner or later it will be exceeded either thanks to innovation or due to stricter requirements. From that perspective, the performance of the new technology is intriguing; it may well set some of the future directions.

From more of the Sandvik equipment point of view, our customers are expecting to get value for their investment. To be able to meet these needs, the Stage V needs to be able to deliver as expected. To advance other technologies in addition to the combustion engines, the battery trucks are finding their ways to the mines as well, such us the Artisan Z50 from Sandvik. On the loader side, we have the battery technology as well, then traditional tethered electric loaders, and a battery-electric loader is being developed too. We have already delivered more than 600 electric loaders.

Can you summarise the feedback from Boliden's Tara that will need to be incorporated?

The first feedback relating to the engine performance has been very positive, but it is too early to provide more details. We are expecting to get valuable feedback about the user experience in a real environment, the truck's maintainability, and general productivity. Based on customer views, we will then evaluate if there is something that still needs more development work so that the expectations would be met. We are continuously talking with our customers and improving our equipment, that is how we operate.

What more can you tell us about your hopes for the TH663i?

The TH663i has gained a significant status in Australia, and for a good reason; the mentioned reliability, reasonable total cost of ownership, low cost per tonne and operator experience to name but a few of its highlights. To keep up the momentum, we are continuously improving the truck with smaller and larger improvements, and we would like to see the TH663i become the most wanted underground truck on the market, that is my vision for going forward.