IT ONLY launched its R 9600 hydraulic excavator in March but Liebherr is already talking about having eight of the 600t class machines operating in Australia by mid-2021. 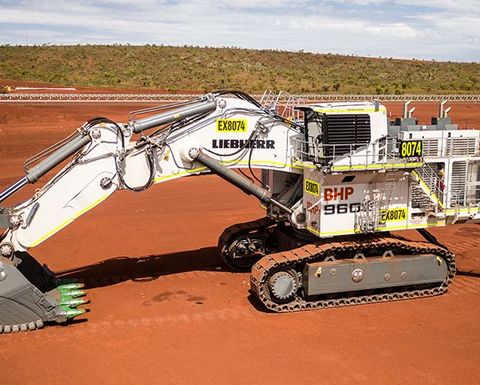 There are already two R 9600s operating in Australia. One is at BHP's South Flank iron ore mine in Western Australia's Pilbara and the other is at Coronado Global Resources' Thiess-operated Curragh North metallurgical coal mine in Queensland.

According to Liebherr, BHP plans to have another five R 9600s in operation at South Flank by June and an eighth machine will be going to a New South Wales coal mine in mid-2021.

"Liebherr and BHP have strengthened our partnership over the past few years and these six pre-series R 9600 units sold into South Flank represents the success of our collaborative efforts," he said.

Australia is the largest market for Liebherr's 600t class excavators with more than 70% of its machines operating there - predominantly in iron ore and coal.

That is why Liebherr went to customers BHP and Thiess to put its R 9600 through its paces.

Thiess' R 9600 will be used on a collaborative production study at Curragh North in April to validate its performance in a coal application.

A study intended to understand the performance gains from some of the operator assistance packages Liebherr has included in the R 9600 will also be conducted alongside that. It will look at the Bucket Filling Assistant, a combination of Anti-Stalling and Semi-Automatic Bucket filling functions.