On the first day of MINExpo International, Komatsu Mining held a press conference with some of its senior executives that showcased the company’s strong automation focus. 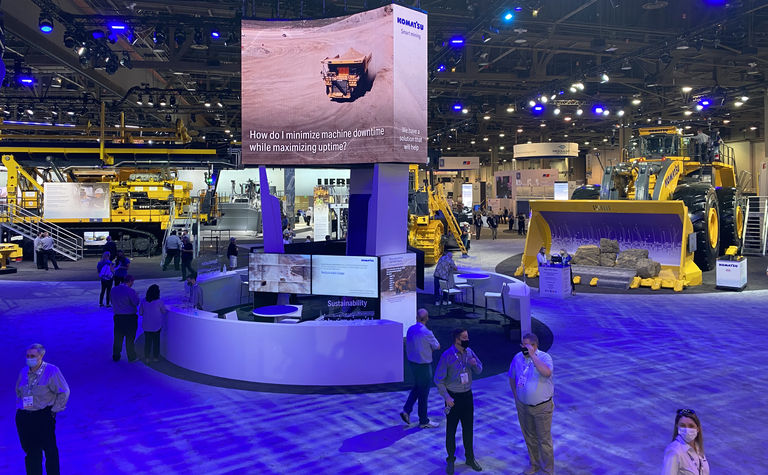 The FrontRunner AHS is designed to support the transition to autonomy by enabling manually operated equipment, such as loaders, dozers, graders and light vehicles, to seamlessly interact in an autonomous truck environment. Komatsu has system functionality that enables manual haul trucks to operate with autonomous trucks.

"Since the first commercial deployment of FrontRunner with Codelco back in 2008, we're proud to have been at the forefront of autonomous haulage with our customers," he said. "Just last week, we had 400 autonomous trucks deployed around the world, and our customers have now used AHS to move more than 4 billion metric tonnes of surface material worldwide."

Hori added: "We've continued to evolve the focus of our truck development programme since the last MINExpo, where we introduced our innovative autonomous haulage vehicle. We're continuing to develop autonomous solutions prioritising the reduction of carbon emissions. Each evolution is a step toward future commercial truck offerings, and we're working to bring both priorities to life in future concepts."

Hori also announced the development of Komatsu's autonomous water truck, which is currently undergoing trials. The technology on the concept HD785-7 truck, which is based on Komatsu's AHS, autonomously controls both the truck's movement and water disbursement through the same platform.

The AHS allows the water truck to travel autonomously on a pre-defined haul road as well as working cooperatively with other autonomous trucks and staffed equipment. The system controls the amount of water disbursed, according to the vehicle speed and haul road inclination, as well as managing the watering history to avoid overwatering.

The Komatsu HD785-based autonomous water truck is scheduled for commercial release in 2022.

One of the ways Komatsu is showcasing its automation solutions at this year's MINExpo is a remote console demonstration of its teleoperation system for excavators, which is being done twice daily at 11:30am and 1:30pm at the Komatsu booth. The operator will leverage an Immersive Technologies console that provides the user information and views of what is seen from the cab of the Komatsu PC7000-11 onsite. Multiple cameras and sensors around the machine and bucket, as well as a 360° monitor and machine display, support visibility and situational awareness for the remote operator.

"An operator will teleoperate, in real time, our newest hydraulic excavator loading our autonomous concept truck at our proving grounds in Tucson, Arizona, more than 400 miles [644km] away," said Hori. "Development on the PC7000-11, a semi-autonomous 700t class excavator, is nearing completion and we have plans to trial this machine at a customer site next year."

John Koetz, president of surface mining at Komatsu, talked about drill automation. "As our customers grow their operations, their capabilities and needs change," he said. "We've offered drill automation capabilities and increased our drill product line to meet those needs. Each of our customers is a different level of the automation roadmap. We're now offering drilling solutions from level one, which is pure manual operation, to level three, which includes full auto navigation. We're also conducting testing right now for higher levels of automation, to where the system is able to execute core functions and intervention is required only for complex functions."

Komatsu's ZR77 semi autonomous blasthole drill is currently being tested at the company's proving grounds in Arizona. The company has two additional 320XPC teleremote drill systems that are deploying in Brazil and Chile. Koetz said: "In addition, we formed a partnership with a major mining company for autonomous electric drill development on that large platform."

The company unveiled its Komatsu branded drills at MINExpo. Koetz said: "We've introduced the newest model, the ZR122, to our family of drills and that's going to continue to expand with each iteration."

For soft rock operations, Komatsu has introduced new machine features and a conveyor chain at MINExpo that are designed to help mines maximise uptime and achieve their productivity goals by progressing automation and helping to solve common issues. These include the 12HM46 continuous miner with the new Titan cutter head, the BH-18A battery hauler with new lithium-ion battery technology and the NXT single sprocket conveyor chain.

The 12HM46 continuous miner with Titan cutter head is Komatsu's largest and most powerful drum-style continuous miner. It has 50% more cutting power and 70% more productivity potential than the company's other continuous miners. The machine is has been specifically engineered for industrial mineral applications, such as trona, gypsum, potash and salt.

The BH-18A battery hauler with lithium-ion battery technology is designed to deliver improvements in productivity, sustainability and cost compared with traditional lead-acid battery technology. Lithium-ion batteries, which fully charge in less than 2.5 hours, can power a hauler up to 41,453m per charge, compared to 35,052m for lead-acid batteries.

The NXT single sprocket conveyor chain features a new chain link with dirt relief technology that is 46% stronger than Komatsu's previous models. It includes dual scraping flights that are designed to solve issues that could lead to premature chain failure, and other features to improve the time necessary to change flights and connecting links. This part is designed for both continuous miners and shuttle cars.

"Building on years of experience in this space, we've continued to enhance use of automation in underground mining to help inform real time decision making and automate processes in customers' longwall and room and pillar operations," said Jason Savage, senior vice president, Joy underground soft rock mining at Komatsu. "We are now achieving conditional and high automation levels with fully autonomous systems managed from remote locations. This is possible through the highly sophisticated use of sensors and gyroscopes, [which are] required since traditional satellite methods are not available underground.

He noted that Komatsu's customers are adopting automation at a high rate. "Recent customer case studies in room and pillar operations showed that automation utilised over 70% of the time in cut, haul and crush processes helped to reduce cycle times by as much as 12%," he said. "That's at least an additional 20 minutes of cutting time per shift."

To take automation and remote management to the next level in longwall operations, Komatsu is launching a new control platform called RS20n for increased data speed and Ethernet connectivity. Set to launch in 2022, Savage said it would allow real-time decision making in a highly productive system, while keeping people away from the mine face.

He added: "We now have continuous cutting methods for a variety of applications across all types of material hardness. Our proven continuous mining solutions can be used to help operators reliably cut through materials, from the softest like coal and potash, to volcanics and some monzonite applications."

In hard rock, Komatsu also gave an update on its partnership with Vale to trial the DynaCut mechanical cutting technology. "The introduction of the MC51 machine featuring our proprietary DynaCut technology [means] mine operators now really have a choice as it comes to how you need to break your rock," said Josh Wagner, vice president of Komatsu underground hard rock mining.

"Not only does the DynaCut technology provide a controllable way of cutting the rock within 50mm of accuracy to the plan, [but] the machine itself is designed to advance more sustainable mining methods by reducing the amount of equipment required to get to the orebody. The MC51 is now being trialled at Vale's Garson mine in Canada to help finalise things as we go to commercial offering."

At the Minexpo 2021 Komatsu's haulage concepts are prioritising emissions reduction as well as auton...